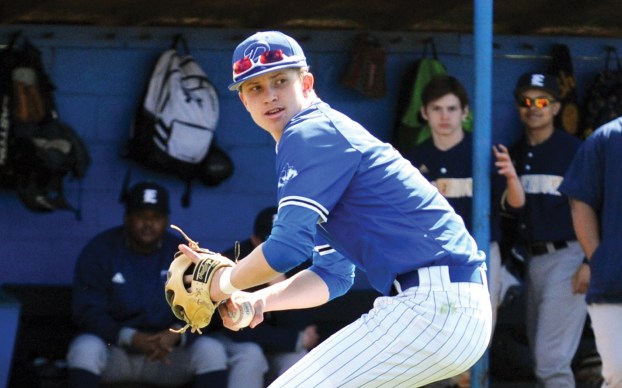 Thursday was a good day for Danville baseball.

The Admirals traveled to Central Hardin for a pair of contests and finished with two shutout victories.

They weren’t just shutouts: Christian Howe pitched a one-hitter against Lewis County in a 6-0 win, then Ethan Wood followed it up with a no-hitter against No. 17 Central Hardin.

Head coach Paul Morse said Howe’s no-hit bid ended with a bloop single in the bottom of the seventh inning.

The team’s success on the mound is a combination of things, Morse said — the Admirals have five shutouts this season, all in the last two weeks. More than anything, his arms are getting into midseason form as district play nears.

“They have both been pitching pretty good, the whole pitching staff has this whole spring,” Morse said. “Guys are finally starting to get into some shape. They’re just attacking hitters.”

Howe continues to ramp up after an arm injury ended his season early last year, and Morse said he was throwing in the mid-80s against Lewis County. He’s pitched 16 innings this year and has 22 strikeouts and a 1.75 ERA.

Wood leads the team with 22 innings pitched and has a whopping 39 strikeouts and four victories. He’s allowed just two runs in those 22 innings.

More than anything, though, Morse said Wood steps up when the lights are brightest. He smacked two homers against Lewis County and followed it up with a no-hit performance.

Danville’s bats backed up their arms on Thursday: Wood had two homers and four RBIs, and then Preston Barnes and Cayden Shaver each hit a home run against Central Hardin.

It was a unique day and Morse said it’s always something new with his talented group of players.

“I know I’ve not had two no-hitters in a row, especially in one day,” he said. “I don’t think I’ve had a no hitter and one hitter in one day. As long as you’re around baseball, they say that every day you’ll see something you haven’t seen before. That’s the truth.”

Danville (13-1) has played more games than any other team in the region, and the important games are on the way: After a visit to Holy Cross on Saturday, Danville hosts 12th Region opponent Wayne County on Monday and then it’s the first 45th District doubleheader of the season against Lincoln County on April 9-10.

After Lincoln, it’s the 12th Region All-A Classic at Somerset next weekend.

“That’s what we’ve been building for here early in the spring, getting prepared for this,” Morse said. “Even these games, it’s still just about getting better, playing one game at a time. We want to be focused on the task at hand, individually each guy playing one pitch at a time, one play at a time defensively whether it’s good or bad. Same thing at the plate, one pitch, one at bat. No matter how good or bad you did before, you’re starting over and it’s a new one. That’s kind of like what it is with the district games: Going into those, everybody’s even, whether you’ve been struggling or playing good.”

And Morse likes where his team is at, mentally and physically, for the upcoming district slate.

“They go out there and play, have fun,” the coach said. “They like to play and compete. They just go out there and do their thing. Sometimes you wonder from a coaching standpoint if they’re focused before a game, we’ve had some talks on that this year early.”

Winning comes down to pitching and defense, and the Admirals have had that in abundance this season.

Offensively, Morse said he’s liked his team’s improvement in approach at the plate. The Admirals are still young, with four upperclassmen on the roster, meaning most haven’t had more than a year of seeing varsity-level pitching.

“Hitting is up and down, that’s the way it is at every level,” Morse said. “I think we’re starting to swing the bats better now, we swung well (Thursday) and had better approaches at the plate. You don’t treat every pitcher you face the same way. Some guys you have to be more aggressive with, others you’ve got to be more selective. We’re still young, and I think that’s where that is showing more than on the defensive side of the ball and pitching.”