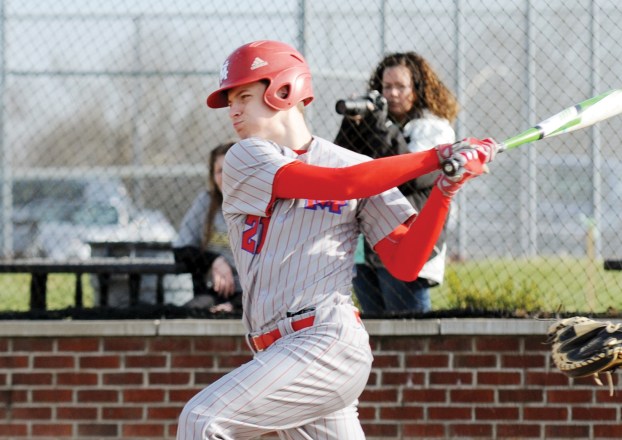 HARRODSBURG — For Mercer County baseball it’s all about being, as coach Adam Shartzer calls it, “patiently aggressive.”

And that approach has led to a fast start for the Titans to begin this season.

Through the first 10 games of the year Mercer County’s record stood at 8-2, the best start for Titan baseball since the 2014 season when they started off 10-0.

Thursday’s win, which improved the Titans record to 9-2 was the most improbable of them all.

The Titans trailed 9-4 with the bases loaded and two outs in the bottom half of the sixth inning. Then Nathan Tatum singled to make it 9-5, followed by a Jamason Sherrow double to make it 9-7.

That set the stage for Cayden Devine to play hero.

The freshman saw an 0-1 fastball that he ripped to left field, clearing the fence for a three-run home run to give Mercer County its first lead of the game.

“It was pretty special, especially since it was a freshman that did it,” junior Dillon Warren said.

And while it was Devine that provided the heroics in the win over Western Hills make no mistake about it: Mercer wouldn’t be 9-2 without the play of Warren.

Through the first 11 games of the season, Warren is hitting an absurd .464 and has a remarkable .559 on base percentage.

In Thursday’s win he filled up the scorecard, going 1-for-2 with a single, two walks and three runs scored.

“He’s a competitor,” Shartzer said. “I told him when he was a freshman that he could be a special talent and that he could do some great things here. He got healthy, built into his body and hasn’t stopped since.”

Opposing pitcher’s haven’t been able to stop Warren since, either.

And he can do more than just hit.

In last Saturday’s game against Pigeon Forge in that Spring Break tournament, Warren threw every pitch in an extra inning complete game — eight innings, while giving up five hits, two earned runs and striking out four — to get the win on the mound.

His pitching prowess was again on display in Thursday’s come from behind win.

Summoned from his spot in left field to take over on the mound in the top of the third, Warren finished off the game for the Titans.

He managed to put a shaky fourth inning behind him and left no doubt about his dominance at the end of the game, retiring the last seven Western Hills hitters he faced to help complete Mercer County’s comeback.

“I just follow my pitches,” Warren said. “Coach (Jeremy) Noel knows what he’s doing and knows what he’s calling. I’m just trying to throw it. Props to my defense, too, I wouldn’t be where I am without them.”

Because Warren isn’t a high strikeout pitcher — he’s fanned 11 batters in his 18 innings — he has to rely on his defense to make plays. However, Shartzer says that because Warren knows that, it’s become one of his strengths.

“Once he gets zoned in and starts throwing strikes and has command of all three pitches he’s one of the best in the state,” Shartzer said. “He may not strike out a lot of guys but he’s going to let them put the ball in play and trust in his defense. He’s a great pitcher for us.”

Mercer County will need as much great pitching as they can get as they try to finesse their way through a tough 12th Region. But before they do that, Shartzer says all their focus is, first, on the 46th District, which has been dominated by West Jessamine the last seven seasons.

“The sky’s the limit with this team,” Shartzer said. “Right now, we’ve got our goals set on district. Hopefully if we get in that region tournament we can make some noise.”

“We have huge expectations,” Warren said. “But as far as what we can accomplish I expect us to go to state and hopefully win that.”

Mercer County is back in action Tuesday as they open up their district season visiting the seven-time defending 46th District champion West Jessamine Colts.

Centre made it known that it wanted Carter Baughman on its men’s basketball team. Baughman said the Colonels made the... read more