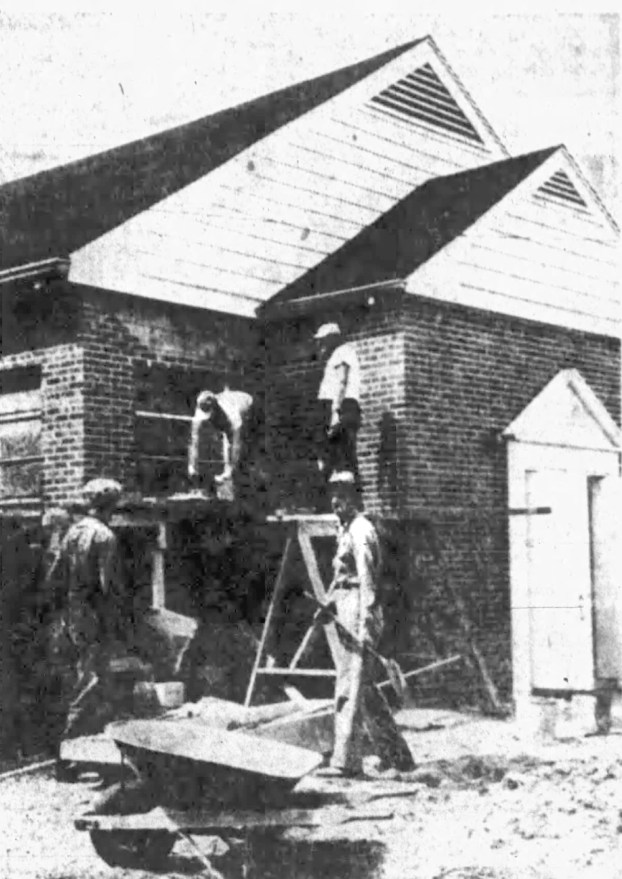 The one-story brick structure, for which ground was broken at 515 South Fourth Street on Sept. 18, 1953, was built by Faulconer Construction of Danville with a bid of $31,866.70. (Advocate-Messenger archive)

On the front page of The Advocate-Messenger 65 years ago today — April 9, 1954 — there was a story describing the upcoming dedication service of the Salvation Army’s new building.

Capt. Marian Jones, head of the Danville Corps at the time, and her assistant Lt. Nellie Webb had made all of the arrangements for the ceremony and public open house that was to be held on Sunday, April 11.

The building, which is the same building being used today, is located at 519 S. Fourth St. A groundbreaking ceremony had been held during a special community program on Sept. 18, 1953, and construction began immediately.

The building was a one-story brick veneer structure designed and built by Faulconer Builders of Danville. The company had been awarded the contract for $31,866.70.

The building was going to be used for all of the church’s activities and for the community’s recreational needs, according to the article.

The Salvation Army offices were to be located in the building, as well as a chapel, recreation room, classrooms, kitchen and separate shower facilities for boys and girls.

For the special service, a 30-piece band made up of Salvation Army members from Louisville and Wilmore was going to perform under the direction of Capt. Walter S. Swyers. Also, a male quartet and soloist Virginia Jenkins were going to entertain the crowd who gathered for the dedication.

The guest speaker was Col. Edward Laity, property and legal secretary of The Salvation Army Territorial headquarters in Atlanta.

Many Danville dignitaries also were invited to participate in the event.

Danville Mayor W. Terry Griffin and Pierce Lively, president of the Danville and Boyle County Community Chest, which gave financial support to the Salvation Army, were set to speak at the service. Fred Niekirk, commander of the Danville Chapter No. 12 Disabled American Veterans was going to donate a U.S. flag to the organization.

Just four months later, the Salvation Building Fund announced it still needed to raise $18,000 to pay off the remaining amount owed for the building’s construction. The initial money was raised during the previous year, according to a newspaper article on Aug. 18, 1954.

Pennington said the campaign was supposed to only last two weeks. “The good work of the Salvation Army in its particular field is indispensable and I feel that the citizens of Danville and Boyle County will join with us in a strong determination to make the coming campaign … will assure immediate completion of the work started last year,” Pennington said.

“It is an honor to serve an organization that has served our community, our nation and the world for the many difficult years the Salvation Army has. This organization has always kept a candle burning when all others have failed, and we certainly want to help them in their Christian work as best we can,” Pennington said.

The county’s new solid waste director is aiming at a grant that may hopefully end up making the county a... read more