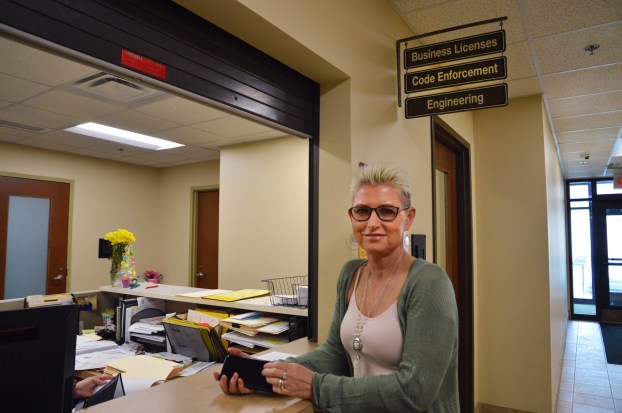 Bridgette Lester, director of codes and financial enforcement for the City of Danville, stands in front of the customer window at outside her office at city hall. Photo by Bobbie Curd.

Codes director wears many hats as she works for her ‘16,000 bosses’

Lester pauses to take a look at the many ordinance and legal books she uses often as director of codes and ABC administrator.

Bridgette Lester stands with Code Enforcement Officer Ian Young. As director of codes, Lester says the department wouldn’t be successful without the team she is lucky enough to have in place.

As director of codes and financial enforcement for the City of Danville, Bridgette Lester says it’s hard to explain a “normal” work day; there really are none.

“It’s basically whatever fire we’re dealing with that needs to be put out,” Lester says from behind her ergonomic desk. It can be raised just enough for her to stand behind it, since she spends a lot of time in front of two huge screens, assisting officers in the field on making determinations for citing or warning, for example. 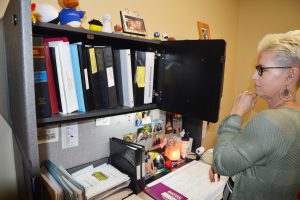 Bridgette Lester pauses for a moment as she shows all the ordinance and ABC books she uses frequently in her job as director of codes and ABC administrator for the city. Photo by Bobbie Curd.

The grass and weed season is just around the corner, so they’re ramping up for all the neighbor calls, or people just walking through town noticing eyesores. Lester says the community keeps them on their toes: Danville is always commented on as a beautiful town by visitors, and residents want to keep it that way.

The department communicates with the public quite a bit through email, texts and phone calls. Code Enforcement Officer Ian Young uses an iPad in the field affixed with the coding software — they’re ordering printers to go with it so officers can leave the actual notice of violation while they’re at the vehicle.

“Before, we’d come back to the office, print it out and mail it,” Lester says. She’s seen a lot of transition over the 20 years she’s been with the city.

She was hired as an entry-level budget analyst and worked for former City Manager Ed Music back in ‘98. Then, Lester says her life got turned upside-down eight months later, when Music resigned in August of ‘99.

“I was interim city manager for five months. I went from the bottom to the top in eight-months’ time,” she says. After that, another manager was hired, but only stayed until 2000. She went back into the position for 10 months, until a replacement was found.

Although she began as director of codes in 2005, she was ABC administrator before that. In 2003, she started dealing with alcohol when Danville went “moist.” The training was Baptism by fire, Lester says, and due to how constant alcohol laws change, that aspect is still the same.

However, she’s now the president of the Kentucky ABC Administrators Association, something she says is invaluable due to the contacts she’s firmed up. Working for city and county governments is all about public service, she says, and helping counterparts out who are going through something she may have already figured out is part of that service to her.

Lester pulls out a thick ABC book, thumbing through it. This month, codes is working on alcohol license renewals. They check servers’ training, make sure all fees are in and everything’s up to date.

“This book changes every time you turn around … It really is like learning a new language,” she says — but adds that she’s not complaining. “I have had a 360-degree perspective … I got an education about this city that most people don’t, and I feel grateful for that.”

Lester is also grateful for what she calls a “super staff.”

“I’m beyond blessed“ she says, for the four full-time people working under her. Young has been there a year now, but the department is awaiting a recommendation on another full-time officer to hire. Tiffany Luttrell is the department’s administrative assistant, who actually started off as a 911 dispatcher, “which helped tremendously,” Lester says, because she knows code terminology, for example. 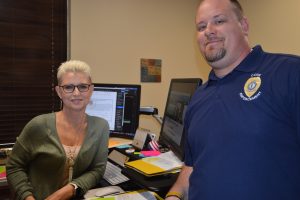 Bridgette Lester, director of codes and financial enforcement, and the ABC administrator, stands in her office with Code Enforcement Officer Ian Young. She says the reason the department is so successful is due to the immense teamwork required. Photo by Bobbie Curd.

“It’s definitely, definitely not all me,” Lester says. “The only way we’re successful is because everyone works as a team.”

Codes’ goal is compliance, not giving out fines, she says. But sometimes they do have to use that tool. If someone is warned and cited, for instance, due to grass height, but does nothing, codes has to get a crew to mow it. And it costs a lot more than if the resident did it on their own.

“And if they don’t pay, we put a lien on their property until they do, and it adds interest,” she says.

There are sad situations they encounter, Lester says, like elderly parents whose children live out-of-state and aren’t really in tune with what’s going on in their parents’ lives. There are the houses they have to go into, which are covered in filth — code officers and others who inspect situations like this have even walked out and thrown their clothes away.

She recalls a specific time codes was called in because social services was on the scene, and couldn’t believe what she witnessed a toddler living in. The house had to be condemned.

Sometimes, renters will move, take all of their possessions out of a house and leave them on the sidewalk.

“We’ve seen a lot over the years,” Lester says. “And yes, we do ask ourselves how things get to this point. We’ve seen some horrendous cases of hoarding.”

Codes is also responsible for investigating calls from renters who say landlords aren’t doing what they should under the city’s property maintenance ordinance. The department collects the insurance premium tax quarterly; deals with pawnbrokers on licensing, bonds and background checks; enforces occupational licenses; works with the parking regulation board on citation appeals; and works closely with the Architectural Heritage Board and Planning & Zoning Commission. It also enforces the smoking ordinance, works with animal complaints, abandoned cars, pools …

The city codes book is huge, but everything is on the codes website for anyone to review, Lester says.

“We’re public servants; we’re here to help,” Lester says. But some people aren’t going to do what they need to with their property until you give them a reason to.

“I honestly look at it like I have about 16,000 bosses,” she says, referring to the population of Danville. “We are here to serve the people, and as long as they communicate with us, we will work with them on any situation. We’re here to help.”

Medical emergency may have caused Mercer man to wreck

The driver of a vehicle who struck the front porch of a home at the intersection of Third Street and... read more