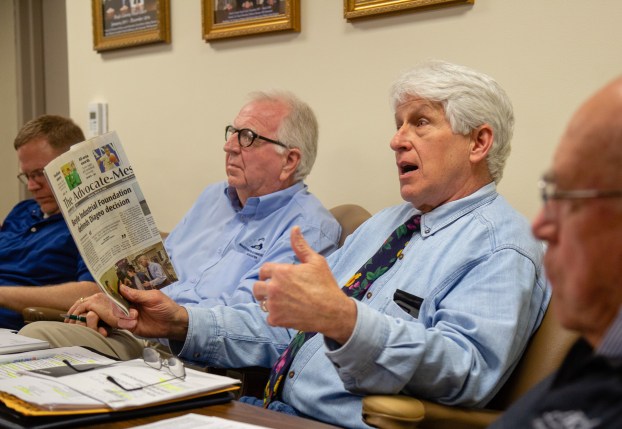 Magistrate Tom Ellis holds up a newspaper article as he expresses concerns about the Boyle County Industrial Foundation. Photo by Ben Kleppinger.

Boyle County magistrates expressed their continued frustration with the Boyle County Industrial Foundation Tuesday over its decision last year to withdraw a 100-acre tract of industrial park land from consideration for a multi-million-dollar project from international distilling company Diageo.

Several county officials called for the Industrial Foundation, a private nonprofit organization, to add public elected officials to its board of directors. 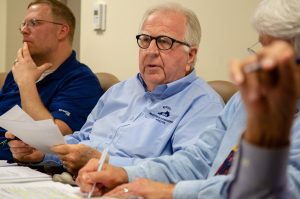 Albright defended the Industrial Foundation board’s position that the Diageo project — which ultimately chose a Lebanon/Marion County location for a $130 million, 30-job facility — was not a good fit for Boyle’s industrial park. He said he still believes withdrawing the Industrial Foundation land from consideration for the project was the right decision, and that another industrial project still in the works affected the decision.

“This is part of what I can’t tell you right now, but I know of other stuff that’s going on … the utilities were an issue,” Albright told magistrates.

He said Diageo wanted 1.2 million gallons of water a day for its facility, when there’s already issues with supplying enough water to the existing industries in the park.

“We’ve got to make sure that Wilderness Trail (Distillery) has their water,” he said. “There’s another project that I can’t discuss, but if it comes to fruition, then utilities are an issue for it as well.”

Albright noted there was no guarantee that Danville would have been chosen by Diageo if the Industrial Foundation hadn’t withdrawn the land, and that the land Diageo chose in Lebanon was perfectly suited for what it wanted. He pointed out that when the Industrial Foundation made its decision, the proposal on the table was for 20 jobs with unspecified salaries on 100 acres of land.

“Once we saw their proposal and what they were offering … we just couldn’t go along with it,” he said.

Magistrates accused the Industrial Foundation of failing to consider the total picture in regards to tax revenue for local governments and taxing districts that could have been realized from the project. 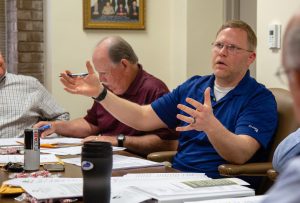 Magistrate Phil Sammons asked if the tax revenues the project would have brought in outside of jobs was considered.

“Our number-one issue was to provide jobs,” said Albright, who at other times in the meeting argued the land has the potential to attract many more jobs than Diageo was offering.

“You guys were more concerned about such few employees taking up such a large piece of land,” Sammons said. “… But you didn’t consider the tax base of the city or the county.”

“Sure we did,” Albright countered. “They could have gone to other places in Boyle County, but they chose not to. We didn’t restrict them from going any place else to look at other land.”

Sammons soon asked Albright whether the Industrial Foundation would weigh the tax revenues of any potential project more heavily now, given the reaction to its decision on Diageo.

“It’s not like we did not look at all the aspects in this particular situation, and we’ll consider things you can’t discuss right now, which could be utilities — maybe we’ve got a water user that’s going to use all the water excesses that we have,” Albright said.

Later on, Sammons said he’s been on the court longer than anyone else and has heard the same “song and dance” from economic development leaders for as long as he’s been around.

“They come in different ways,” Albright responded. “They came to Adkev. They came to expansions at Denyo —”

“We, uh —” Albright began, before Sammons interjected again, “You had nothing to do with it and you know that.”

Albright said the Industrial Foundation provided the land that American Greetings first built on and worked with the company to retain jobs in Boyle County instead of those jobs going somewhere else.

“American Greetings doesn’t really share a lot of that information,” he said. “And if they do, it’s up to them, not us and we respect their desire to be confidential in things that they do.”

Caywood also had his own bones to pick with Albright. At a different point in the meeting, he said acquiring land to attract new businesses is theoretically supposed to be a joint effort of public and private organizations going forward, then pointed out that no public officials have voting seats on the Industrial Foundation board.

There are ongoing debates now among EDP members as to how the organization could purchase or improve land for private purposes if its funded in part by public agencies, Albright acknowledged, which is why EDP Chair Ben Nelson has assembled a working group to investigate possible ways to move forward. Instead of the Industrial Foundation buying land for development in the future, Albright said, “I think we’re trying to reach a point where the partnership can acquire assets.” 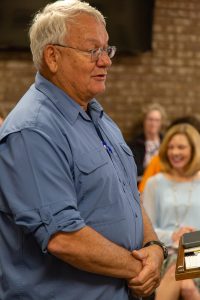 “Our future is … to continue doing the things we’ve been doing since 1960 because they were obviously successful at the time. But yes, there are some changes, because the competition we face now does things that maybe they didn’t have years ago,” said Albright.

Caywood said the Industrial Foundation did spend the money decades ago to help Boyle County’s job base get to where it is. But “that business plan has changed.”

Albright began, “I would say that we’re a partner with EDP —”

“EDP isn’t writing the check. We write the checks for EDP,” Caywood interjected.

Albright answered, “We’ve got to figure out how we can —”

“When are we going to figure that out?” Caywood interjected again. “… If the foundation is going to be a land-owner … and you’re a private organization, (Boyle County) doesn’t have a voice, (Danville) doesn’t have a voice, when are your fine folks — great folks on the foundation sitting around the table — when is this going to get done? Because you’ve run out of land, basically.”

“When we can sit down with the city and the county and come up with a method to buy the land …” Albright said, before Caywood interjected again, banging his fist on the table: “We make plans for days. When’s the date? What’s the timeline, John? I’m putting pressure on you.”

Albright answered, “I’d say as soon as we can, I think it’s part of the strategic plan …” and again Caywood interjected, “… You know on my calendar, ‘As soon as we can,’ is not on any calendar I’ve seen.”

Caywood’s pummeling ended there as Sammons and Magistrate Tom Ellis tagged in and began questioning why the Industrial Foundation needs to own land at all, since other communities are buying land and then giving it away to prospective businesses.

Like Caywood, Ellis expressed concerns throughout the meeting that the Industrial Foundation didn’t have anyone from local government at the table when it made the Diageo decision. He said the decision took away the possibility of between $400,000 and $500,000 of tax revenue annually for the county, which would have been part of more than $1 million for all governments and taxing districts.

Magistrate Jason Cullen said Lebanon was able to land the Diageo project in part because it told a good story and found a way to attract the company, even though the site was initially outside of the planned target area.

“It’s about telling the story and being able to sell the place, and that’s kind of where I’m concerned about … EDP in general. Are they telling the right story? Are they able to make the sale?” Cullen asked. “… We’ve had a lot of opportunities but we haven’t been able to make the sale. … We’ve got a beautiful county here with a lot of opportunity and we have a workforce that would only get better with opportunity.”

“We had one on a treble hook and we don’t have it and that’s half a million dollars a year,” Ellis responded.

“You can’t miss opportunities because you never know when the next opportunity is going to come,” Caywood said.

“I understand, and that’s just one piece of property. They had opportunities to go anywhere else in the community if they wanted to, they chose not to,” Albright said.

“We felt like that was a bad fit and we have a better fit for it,” Albright said. “And there will be other opportunities to deal with that property.”