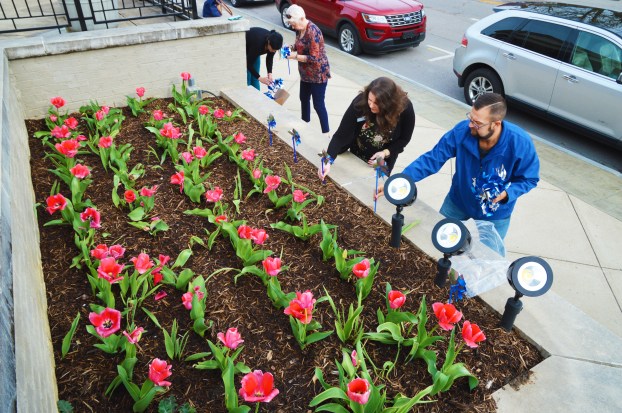 City hall has some new shiny bling out front, thanks to CASA of the Bluegrass. Its director, Laura Guerrant, and staff “planted” blue pinwheels around the flowers Monday during the city commission meeting, in honor of Child Abuse Awareness Prevention Month.

Guerrant told the commission that the purpose of the month is to spread awareness.

“To explain exactly just what child abuse is, how to prevent and report it … And there are several ways anyone can get involved,” she said, noting CASA’s website is kept up to date with scheduled, public events and trainings.

“We had 224 new petitions of child abuse and neglect in our county last year — that’s a lot of kids,” Guerrant said. She said in this year’s first quarter alone, there have been 48 cases referred. 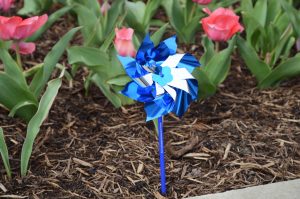 “So you can imagine, it keeps growing,” she said.

During the last week of April, CASA and the Heart of Danville are encouraging downtown to “Paint the Town Blue,” referring to a week-long initiative to make a positive difference in the community, in an attempt to lead the way to end child abuse.

“Storefronts can put up blue displays, and since the symbol (of prevention month) is the blue pinwheel, we will ‘plant’ them out front of city hall,” Guerrant said.

Residents who are also passionate about ending child abuse are encouraged to affix blue pinwheels in yards.

“Plus, we have big, large blue bows you can purchase to show your support,” if pinwheels aren’t your thing, she said.

CASA is selling the bows, donated by A Lasting Impression Florist, for $5 each, which all goes to the organization.

• Put blue ribbons or bows on your front door.

• Use blue paint, construction paper or merchandise in storefront windows. “Get out that pretty Kentucky-blue merchandise and display it; display blue formal wear; and of course that Admiral merchandise,” the campaign information says.

• Change outside light bulbs to blue.

• Set up a pinwheel garden. 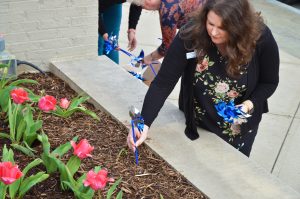 Guerrant hopes the community joins in on the campaign. Photo by Bobbie Curd.

CASA of the Bluegrass will hold its annual Derby Eve Gala, the organization’s biggest fundraiser of the year, 7 p.m. Friday, May 3 at the Danville Country Club. The event is black-tie optional, with live music by Entice. A cash bar is offered. Tickets are $75 each, or $40 for guests of active CASA members. There are “premium table” options, as well, for groups. Visit casaofthebluegrass.org for more information or tickets.

A trial date has been set for a Boyle County man who allegedly killed his wife last year.    Montgomery... read more