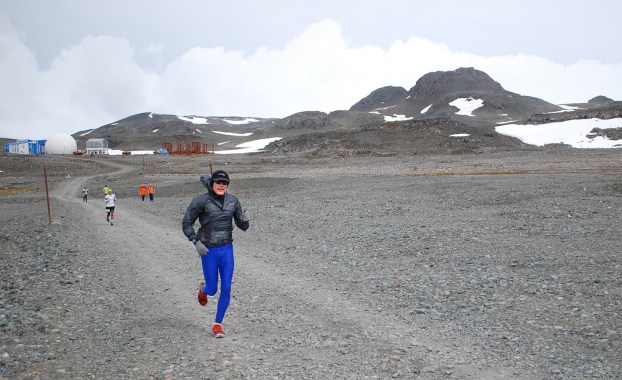 In January, David Anderson ran a marathon in Antarctica and four days later ran another one in South America. The terrain of Antarctica was what he imaged the surface of the moon could look like. Photo submitted by David Anderson

Local man runs marathons on seven continents in a year

Competing in marathons is a challenge that David Anderson enjoys accomplishing. And it was an “epic adventure” when he recently ran seven marathons on seven continents within 11 months.

Since May, Anderson ran marathons in Africa, Antarctica, Asia, Austria, Europe, North America and South America. He had already accomplished running in marathons in the 50 states — a feat which took about 10 years, Anderson said. “I was chipping away at those,” he said.

He didn’t think he’d be able to set a goal of running on all seven continents until he had the opportunity to go to Africa last summer.

Another barrier was the expense of traveling to Antarctica, he said while sitting in his office in Crounse Hall at Centre College, where he’s a professor of economics.

But he searched and found a marathon tour company that offered a better price by combining Antarctica and South America into one trip.

“That tour had us do a marathon in Antarctica on Tuesday and in Chili on Saturday. It killed two birds with one stone,” Anderson said. “So I did Africa in July. I did Australia in December; Antarctica and Chili in January; Asia and Europe in March. The previous May I had done Michigan.” That finished his goal.

Anderson said it’s easier to train for marathons when they’re close together. 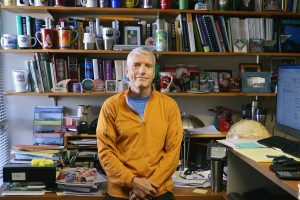 Dr. David Anderson is the Paul G. Blazer Professor of Economics at Centre College and an avid runner. He also recently competed in seven marathons on seven continents over the course of 11 months. Photo by Robin Hart.

“All of the training doesn’t have to happen over and over again. … One marathon can be the training for the next,” he said. “When you sign up for a marathon, you always know it’s going to be an epic adventure because when you travel long distances and try to run 26 miles, you know some things are going to go wrong and some things are going to go right. And you see all of this territory you’ve never seen before and all of these people you’ve never met before.

“And you’re going to be humbled by the distance and by the faster runners. … It’s just signing up for an inevitable adventure that brings with it many good lessons and many good experiences.”

The race in Australia was run in “torrential rain.” Starting at 4 a.m. in order to beat the heat, “We ran through rivers of mud. Many times it was difficult to get the traction to go forward. Sometimes I felt like I was in a cartoon. My legs were slipping and I fell down twice. That was really the hardest course.”

The race in Europe took place in a “charming town north of Venice called Treviso.” It looped around a walled village with a moat, then out into the Italian countryside, through vineyards and by a river. “That was probably the most beautiful course.”

The race in Asia took place in Malaysia and started at 2 a.m. due to heat, Anderson said. They were running in dark, and around 4 or 5 a.m., Muslim clerics began chanting from towers for the call to prayer.

“It was kind of a mystical, magical feeling.”

January is the summer season in Antarctica. “There’s not as much snow as you might imagine. … We were running mostly on gravel,” Anderson explained.

“It felt kind of like the moon,” and the temperature was 25 degrees that day.

The scenery was repetitive since the course was eight times out and back again. So the group of 60 runners were able to encourage each other as they passed back and forth.

However, “Most of our cheering section was penguins who were kind of waddling by and looking at us inquisitively.”

Anderson placed sixth in that race. But four days later in Chili, he came in second. “In Chili I was able to beat the winner of the Antarctic marathon. That felt good.” 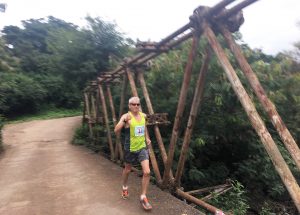 David Anderson ran a marathon in Tanzania, Africa in July. He said he was awarded a trophy for being the first foreigner to cross the finish line, but there were about 20 faster runners ahead of him who lived in the region.
Photo submitted by David Anderson

In Africa, the race was held in Tanzania. Anderson was the first foreigner to cross the finish line and he got a trophy. “But here were about 20 Tanzanians ahead of me. … The truly fast runners were the people who lived there,” he said.

“An overarching lesson” Anderson saw was, “What goes around comes around. Our running is symbolic of that. Tracks or circles and loops, all the marathons were loops, and so literally, we’re going around and coming around. That’s true of many things in life.

“That’s also true … of hatred and kindness. On these trips you’re always trying to get on that standby flight or communicate with a waiter who doesn’t speak English, or get a taxi ride from someone who doesn’t speak your language.”

And he is already looking for his next adventure.

For example, he’d like to take a French cooking class in Europe or spend a week learning how to cook exotic new foods.

And during his return home from Europe, Anderson said he was looking through a magazine that was filled with marathon opportunities. He was especially interested in the marathons held at the North Pole and in a dessert.

“I think there are always more challenges. There are not shortages of adventures that can be had.”

Someone keeps cutting the lock on the gate between Whites Park and Millennium Park in Boyle County. Boyle County shut... read more