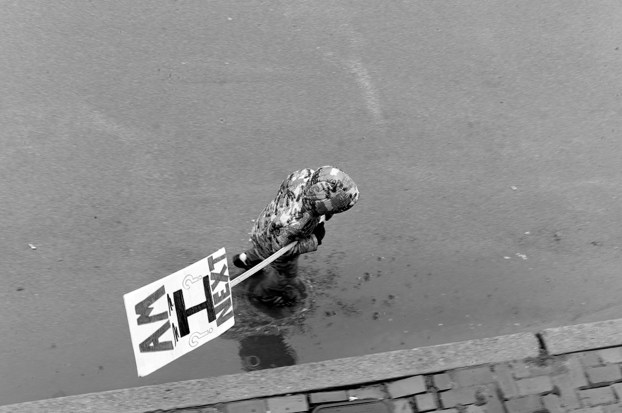 New Photography Exhibition Showcases the Many Facets of the Bluegrass State

What do you picture when you think of Kentucky? Do you see bourbon barrels? Horses thundering down the racetrack? Rolling hills and tobacco barns? All those images and more are on display in the State of Kentucky Photography Exhibition at the Community Arts Center. With 43 artists representing 20 communities, the exhibit offers a glimpse into the variety and complexities that make Kentucky beautiful.

For Creative Director Brandon Long, the premise of the exhibit was simple. 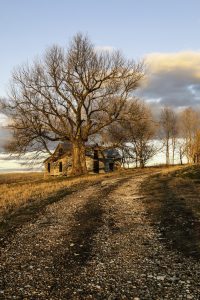 “The Witness,” by Janet Reed will be a part of the new photography exhibit at the CAC.

“We’re showing photographs of the state of Kentucky by photographers from Kentucky,” says Long. “The State of Kentucky Photography Exhibition is an exhibit that’s always wanted to happen. Over the years, I’ve met so many great Kentucky photographers whose work has been shown in various exhibits. I wanted to be able to feature those artists in an exhibit that’s all about Kentucky — and not just the beautiful rolling hills and horse farms, but the Kentucky that only a photographer from the “Bluegrass state” could capture. This exhibit is not just about the geographical boundaries that end at the border, but the current socio-economic-political-cultural climate as well.”

The Arts Center issued an “open call” for this exhibit, meaning that any artist who met the exhibit criteria was invited to submit work. Of the more than 200 entries submitted, exhibit juror Ed Lawrence selected 93 for inclusion in the show.

Lawrence says, “The diversity of approaches to photography brought this show together. Whether shot with an iPhone, digital camera or film camera—all had their merits. I liked seeing photojournalism, abstracts, street photography, and manipulated photographs all in the mix. The State of Kentucky Photography exhibit truly reflects the state of photography in Kentucky.”

Danville natives will recognize familiar landmarks in several of the pieces, including Constitution Square, Perryville Battlefield, and Shaker Village. In a wonderful moment of artistic layering, two photographers in the exhibit — Nick Lacy and Daniel Kirchner — can actually be spotted on the periphery of a photograph by a third artist, Ron Scott, as all three worked to document the festivities at the 224th celebration of the birthplace of Kentucky last year.

While some photographs are of well-known places or public spaces, others are more personal, depicting quiet moments on family farms or a sunset captured on a lonely road. Perryville resident Janet Reid finds inspiration in the solitude of the Perryville Battlefield, particularly in the magical “golden hour” of late afternoon.

She says, “photography is a story about light. It changes the atmosphere constantly. When you capture the light and atmospheric conditions in a picture, they bring a landscape to life. The light can produce a magical effect on any given scene, depending on the air around it. Light is the spirit and soul of a picture.”

Unsurprisingly several artists chose to celebrate Kentucky’s horse heritage in their imagery. Lexington artist Laura Palazzolo says, “I fell in love with the graceful beauty of the horse long before I can remember — perhaps it was my first pony ride on ‘Tony the Pony’ at my grandparents farm, or maybe I was just born horse crazy.  Either way, I dreamed of nothing but horses.” Two of her photographs in the show give the viewer glimpses into the heart-pounding thrill of the racetrack, while a third captures a quiet behind-the-scenes moment of trainers working with their animals. 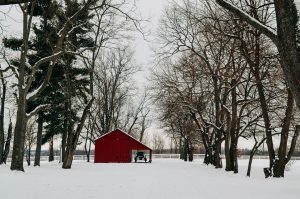 “The Scale House,” by Rebecca Redding.

Other artists focused their lenses on the more turbulent aspects of Kentucky’s identity, including two photographs by Danville photographer Nick Lacy that document political events. In one, a young boy trudges through the rain at a march against gun violence in Harrodsburg, dragging a sign that reads “Am I Next?” A second photograph, titled “Vape Nation” records a group of people in the iconic Make America Great hats flashing hand signs for the camera. The photograph was taken at a campaign rally for Congressman Andy Barr, which President Trump attended.

Lexington resident Brandon Jett describes himself as a photographer, backpacker, desert rat, and public lands advocate. His submissions to the State of Kentucky Exhibition showcase the splendor of Red River Gorge and the hidden beauty of a remote waterfall in Laurel County.

He says, “My photography attempts to take the observer to places many don’t get to visit, trying to capture the moment through the lens. If more people are aware of these wonderful areas and have a chance to see what they offer, perhaps there is a better chance that we will leave these treasures for future generations to enjoy.”

Louisville photographer Kelly Davenport echoes those sentiments, explaining that she wants her viewers to think about how they can be better stewards of the environment. Over the past decade, Kelly has been perfecting her craft of long-exposure digital photography.

She says, “I create experimental images using long shutter speeds to capture light and motion. With long-exposure images, the viewer will see those elements in a different realm than they would see with the naked eye.” 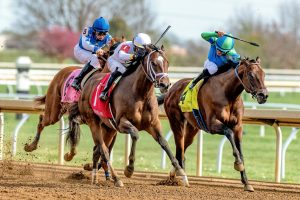 One Liner (Into Mischief) battles with December Seven (Street Sense) to win the 8th race at Keeneland. by Laura Palazzolo

Landscape photographer Libby Jones of Berea, uses photography as an opportunity to investigate the geometries, shadings, and textures in nature. One of her submissions is an aerial view of rolling hills while another captures the energy of autumn leaves swirling in the wind. She says “A camera is a means of seeing, of becoming aware. To make a photograph is to open oneself, and the camera, to receive light. My photography is a contemplative practice of seeing with wonder and gratitude.”

An opening reception for the “State of Kentucky Photography Exhibition” will be 5:30-7 p.m. Friday. The event is free. The exhibit will be up through June 14.

City hall has some new shiny bling out front, thanks to CASA of the Bluegrass. Its director, Laura Guerrant, and... read more