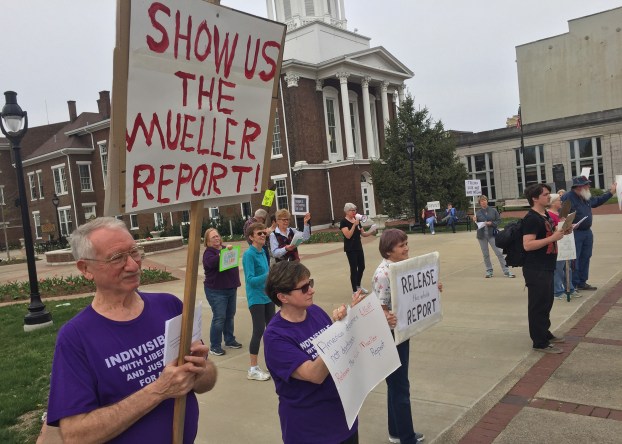 Protesters hold up posters and signs for passing traffic on Main Street. Photo by Nick Lacy.

20 protest for release of Mueller report in Danville

Twenty people in Danville joined in a nationwide protest last week, calling for the full release of the report into Russian meddling in the 2016 U.S. election completed by special counsel Robert Mueller. The protesters gathered in front of the Boyle County Courthouse at 4:30 p.m. on Thursday, April 4. More than 300 protests were held nationwide, according to protest organizer Julie Pease. “We firmly believe that without civic engagement, this report will be buried, but enough public noise and there may be enough pressure to force the AG to release the un-redacted report,” Pease said.

Protesters hold up a pair of posters, one of which is mounted on a shovel. Photo by Nick Lacy.

Jane Preston holds up a poster calling for release of the Mueller report. Photo by Nick Lacy.
You Might Like

By ANNABELLE COOPER Centre Drama Directed by Patrick Kagen-Moore, “James and the Giant Peach” is a story about a lonely... read more