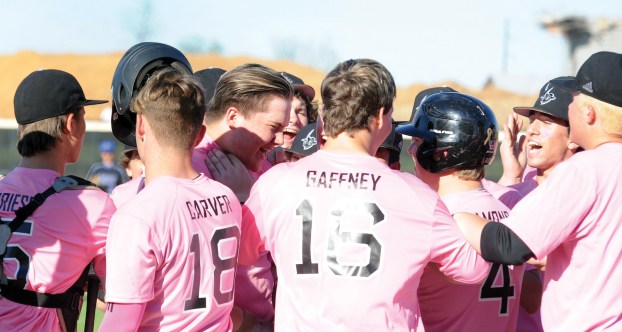 Danville’s got the top five ranking and the most wins in the 12th Region, but Boyle County was the better team Tuesday night.

The Rebels took down Danville 5-3 behind five strong innings from Blake Samons on the mound and a hard-hitting approach at the plate.

It was the Admirals who would jump out to a 2-0 lead in the top of the first inning, when Samons left a pitch up in the zone for Ethan Wood to blast over the right field fence.

That was one of Samons’ only mistakes on the night and one of the few positives in a frustrating game for Danville head coach Paul Morse.

“We can definitely say that’s the worst game we’ve played all year,” coach Morse said. “Asked them that question, they all agreed. The good thing is, I don’t think we can play any worse. I don’t know what it was, but everybody just tried to do more than what they’re supposed to do.”

Danville would lead 2-0 after one, but the Rebels were quick on the rebound in the second. Nate Eldridge matched Wood’s two-run home run in similar fashion to tie the game 2-2.

Luke Gaffney followed it up later in the inning with a bases-loaded single, scoring two more runs to give the Rebels a 4-2 lead.

“Blake did a nice job on the mound, keeping us in it,” Boyle head coach Kyle Wynn said. “He left the ball up in the first inning and Wood made him pay a little bit for it, but he was resilient, shook that off and held it the rest of the game.”

Neither team would score until the sixth inning, but it wasn’t for a lack of trying: Danville left seven runners on base while Boyle left eight.

“There were a couple times where we felt like we had some guys on that we could’ve got them in there, extended the lead to give us a little more comfort, but all in all it was a great win,” Wynn said. “We’ve talked about not giving up that big inning. Let them have that one, then we can come back and score, don’t let it get too far away from us. We did a nice job, I think we learned from the beginning of the year: If they get runners on, buckle up. Danville had guys on second base without an out and they didn’t score, that was nice to see.”
On the other side, Morse said he wasn’t happy with the way his team performed against its district rival. He said too many players were trying to do too much — at the plate, on the mound and in the field.

“Our pitchers tried to throw harder than they throw. We missed spots. We gave up eight two-strike hits today, that’s like a first in my coaching career. We weren’t burying 0-2 breaking balls, or if we were going fastball, we were leaving it over the plate. That tells me guys are trying to do too much with pitches, they were hanging pitches or flying open and the fastball was running over the heart of the plate.

“We made mistakes there, guys were thinking different things and not covering bases on pickoffs or bunt defenses. Little things like that that were uncharacteristic. Guys were chasing bad pitches. That’s all about our guys trying to do more than what they’re supposed to do or more than they’re capable of doing.”

The Admirals had a positive on the mound: Brady Baxter entered in a difficult situation in the second inning but got out of a bases-loaded jam with a double play. He worked around six hits and a walk across 3.2 innings pitched, striking out four. He didn’t allow a run.

“He pitched great and you can’t say enough. Asking a freshman to come in, in that situation and he threw up zeroes in four innings,” coach Morse said. “He did an excellent job, he’s a competitor.”

Danville would cut into the Rebels’ lead in the sixth inning when Jaden Larmour blooped a single to right field to score Brady Morse from third base.

But Boyle was again quick to respond, with Gaffney driving in another run in the bottom half of the frame.

Sophomore Jack Briese earned the save for Boyle, securing the final four outs without allowing a hit or walk while facing the top of the Admirals’ lineup.

Coach Morse said that playing at Boyle had to have influenced his team’s play, just their second loss of the season.

“I think that was part of it today,” he said. “We haven’t done it all year and we did it today, so I would say yes, that’s probably the case. The All-A, coming off those big emotional games on Saturday, haven’t played since. Then pitching isn’t where we would like it to be, we’ve got another All-A on Friday against LCA. Lots of distractions but those can’t be excuses. You’ve got to show up and play, execute and we didn’t.”

The two teams turn around and will play at Danville on Wednesday at 5:30 p.m.

“Back to back districts like this, we keep talking about it: It’s a great win for us but we’ve got to learn from our mistakes and fix them tomorrow, learn what we did well and repeat it tomorrow,” Wynn said. “There’s not too much time for celebration when you play the same team the next day, especially after winning the first one. They’re going to come back hungry, we’ve got to be ready to go tomorrow.”

Coach Morse wants his team to focus on itself, not any other outside distractions.

“The way our district is, it’s a big game, but we just want to come out and play well,” coach Morse said. “Whether we’re playing Boyle or anybody else, we just need to come out and concentrate on ourselves, keep working on getting better, execute and do what we’re supposed to do.”