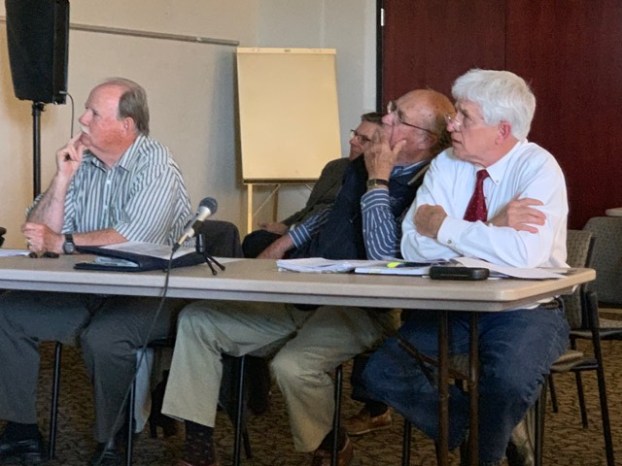 Magistrates Phil Sammons, middle, and Tom Ellis, right, were the most critical of the ordinance, which is already on the books governing management of the Danville-Boyle County Parks & Recreation agency. Sammons made a motion at the beginning of the meeting that the word “parks” should be replaced with “park,” because the county is only interested in funding Millennium Park, he said. Photo by Bobbie Curd.

Joint meeting to discuss parks gets contentious, but officials feel progress made

City Attorney Stephen Dexter shared some words of wisdom at the end of Monday’s special-called joint meeting, the second attempt by the city and county to come together and devise a solution about how to manage the Danville-Boyle County Parks & Recreation agency.

“We just have to make that decision, and get over it.” 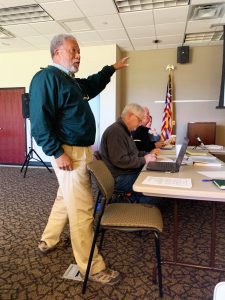 Dexter will be drafting two different ordinances for the bodies to individually discuss, one that represents a joint Parks & Rec Board which only includes Millennium Park, and one that includes the entire Danville-Boyle County parks system.

Dexter’s comment was referring to the almost two hours’ worth of back-and-forth that ensued when Commissioner J.H. Atkins presented the actual ordinances that are on the books, combined with bolded notes he’d collected from various discussions, initiated mostly by two magistrates. He said the bodies simply need to answer one simple policy question in order to move on.

“We’re not walking to the edge of a cliff …” Dexter said. “So if the joint board is just for Millennium, so be it. That’s not a bad policy decision, it’s simply a policy decision … And a service agreement that could or could not include other parks, including the pool. It’s a rational solution to the conversation.”

He said once that system is in place, “you have the basis for a service agreement for any types of coordination. It’s very doable … we have to get away from whatever way we go is demonized. These are two rational solutions that can provide a vital service. We just have to make that decision and get over it.”

Early on, Magistrates Phil Sammons and Tom Ellis got hung up on verbiage they thought implied more responsibility of the county to help with neighborhood parks in the city, even though several others assured them that rewriting the ordinance is just a starting point; a service agreement would still need to be outlined, detailing who contributes what.

Simmons, who had to be called down once for cursing during the meeting, made a motion early on to change any wording using “parks” to “Millennium Park,” because the county would “only be putting money into Millennium Park” — a point he reiterated several times.

Unprepared for any motions before the group could hold a discussion, Mayor Mike Perros asked if there was a second, and the room was silent until Sammons elbowed Ellis, who then said “I second it.” That was one of a couple of motions the two magistrates made, then later rescinded after the process was again explained. 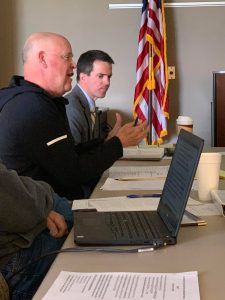 Magistrate Jamey Gay, front, brings up the fact that a service agreement will outline financial details of who is responsible for funding what, regarding the parks system, between the county and city. City Attorney Stephen Dexter listens in the background, and also made that point during Monday’s meeting. Photo by Bobbie Curd.

Atkins pointed out that some of the issues the two magistrates had with the ordinance had actually been on the books since the ‘90s; they had just not been followed, he said.

As Sammons continued to hammer home that the “county was only interested” in funding Millennium Park and that’s all that should be mentioned in the ordinance, Magistrate John Caywood stood over him, and explained that everyone in Danville pays county taxes, and have a right — as taxpayers — to be able to use smaller parks in the city, which should be kept up.

Commissioner Denise Terry asked more than once what “only funding Millennium Park” meant. When she listed off the various programs through Parks & Rec, Sammons said, “Yeah, and they’re all at Millennium Park.”

“They’re not all only there,” she said, listing classes at the Bunny Davis center, programs at Jackson Park and games held inside of other neighborhood parks.

“Mr. Dexter’s comments are quite reassuring tonight that we can do it one of two ways, and I’m confident we can do that, so I think we made great progress tonight,” Ellis said, which resulted in a puzzled look on Terry’s face.

“That still doesn’t answer my question,” she said.

After going through the proposed new ordinance, Ellis said he wanted to point out a very important fact: There was “absolutely no mention anywhere in this of one, specific governmental entity” that should be tasked with managing Parks & Rec, he said.

“Why are you bringing that up?” Atkins asked. He said the county shot the proposal down by the city to take over management of Parks & Rec, so there was no reason to go back to an old debate.

Eventually, Sammons was shut down when he said, “Back over the years … we had a director that was doing a good job. The city wanted to take over and micromanage him. The city started to take over, and Mr. (Ron) Scott (city manager) wanted everybody to answer directly to him. Next thing you know, we’re in trouble …”

Mayor Perros stopped him. “Brother, I love you to death, but that’s a gross mischaracterization.”

Terry said, “That’s exactly why we’re in this position — comments like that.”

Check back Thursday for more on the city and county’s discussion over rewriting the ordinance that governs the Danville-Boyle County Parks & Recreation agency.

Dispatcher enjoys tough job because she gets to help people