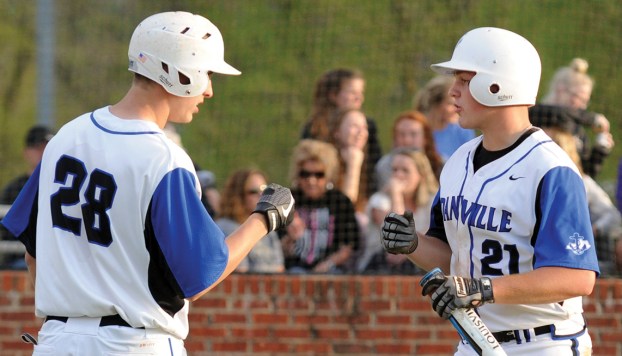 Danville bounced back in a big way on Wednesday.

In the second game of a 45th District back-to-back, the Admirals took down Boyle County 7-2 to even the series and improve to 3-1 in district play.

Christian Howe earned the win on the mound for Danville, striking out nine batters across six innings.

“Christian threw the ball really well,” Danville head coach Paul Morse said. “He’s just now starting to get back to where he has been in the past with his velocity. We’re hoping he warms up a bit more and starts feeling even better. We’re excited about him.”

It was the top of the order that did the damage for Danville: In the first inning, the Admirals answered Boyle’s run with back-to-back RBI singles to take a 2-1 lead.

Danville leadoff Jacob Crank finished the game 3-for-4 at the dish with two runs scored and two runs batted in.

Cayden Shaver provided the biggest blast of the game for Danville, a two-run home run in the second inning.

The Admirals led 5-1 after two innings.

“We didn’t try to do too much, took what pitches were there and we did a good job not chasing pitches that weren’t there,” coach Morse said. “We had some guys come up with big hits with runners in scoring position. That makes life a lot easier.”

Boyle’s Luke Gaffney continued his hot hitting against Danville, hitting a solo homer in the third inning to bring the Rebels to within three runs.

As each pitcher settled into the game, Boyle head coach Kyle Wynn wasn’t happy with the way his team approached the batter’s box.

“I don’t know what it was, I thought we came out flat there early,” Wynn said. “We got some energy there at the end, but it was kind of too late at that point. We gave up runs but then we sat for the whole game, Karson (Thompson) settled in there, we just didn’t make plays. For us to chip away, make it a 5-2 game and our pitcher settles in, we need more on offense.”

Thompson’s first two innings were a struggle, but he put up zeroes in the next three innings, finishing with 5.1 innings pitched with three strikeouts.

The Rebels were also uncharacteristically out of focus on the defensive side, giving up two unearned runs thanks to two errors.

“That’s what we’ve talked about, I thought tonight we should’ve made more plays,” Wynn said. “A couple times when we’ve got beat, somebody made a play and we didn’t. You’ve got to come up with those. That’s the case every day, whether it’s an error or a tough play or a great play, if the other team is doing it we’ve got to do make sure we’re bouncing back so we don’t get beat. That’s what happened tonight.”

On the other side, coach Morse liked his team’s improvement at the plate and on the mound — but the Admirals had three errors and still gave up too many two-strike hits, he said.

“Boyle is a pretty good hitting team with two strikes, they find ways to put balls in play,” coach Morse said. “They had a few ground balls that kind of found different spots, and that’s credit to them for getting the ball in play. I’m also still not 100 percent satisfied with some of our two-strike pitches. But a lot of that goes to their credit.”

Both teams have been battling through injuries this season, and that was evident Wednesday: Boyle leadoff hitter and centerfielder Cameron Yates was out after an injury in the first inning of Tuesday’s contest.

“He’s been doing well at the top of the order for us, luckily Eli (Glasscock) stepped in there for us tonight, had a good game tonight which was good to see,” Wynn said. “Cam is a leader for us, I think he’s one of, if not the best, centerfielder in the region. Definitely another blow to our team right now, we’ve just got to keep fighting, keep working and get after it, do what we can to stay until we get some of these guys healthy.”

Wynn said he liked the way players stepped up on Tuesday, but he didn’t see that same intensity on Wednesday from his squad.

“We talked about it (Tuesday) night, that was a big reason we won,” he said. “We had to fight, scramble and some guys that stepped in for us did a nice job. That’s the way it has got to be, we talked at the beginning of the year, we’ve got to get depth. There’s no way to really learn with depth when you have injuries, you’re just kind of thrown into it. We talked about that (Tuesday) night, guys were doing a good job. Unfortunately that wasn’t there tonight.”

Boyle will visit Lexington Catholic on Saturday for a doubleheader with the Knights and Christian Academy (Louisville).

Danville will turn its attention to the All-A semi-state round, where the Admirals will visit Lexington Christian Academy on Friday. Coach Morse said he likes the way his team has battled through five games in the past seven days and wants to see his team get through one more this week.

“These games are big and definitely mean something, not only to the teams playing but to the community and everybody,” coach Morse said. “It has been a hard week with the All-A regional tournament, then being ready for these, pitchers, guys being sick, not healthy. It has been tough and we have one more this week to get through. Hopefully they can tough it out because they’re four wins away from a state championship. You don’t get those opportunities all the time, and they’ve got it. It’ll be a tough game, we’ll go up there and give it our best shot.”

Deem earns win No. 200 with 8-4 victory at Garrard County

LANCASTER – Brian Deem got a little choked up when he got a new T-shirt Tuesday night. It wasn’t just... read more