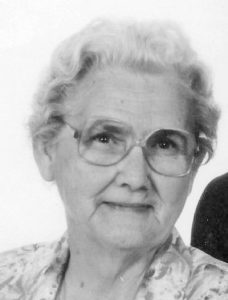 Born August 16, 1925, she was the daughter of the late Jacob Richard and Sara Francis Sanders Browning. Julia loved to quilt. She was a faithful member of Maxey Valley First Church of God.

She was preceded in death by her husband, Charles M. Watts; and son, James Watts.

Services will be at 11 a.m., Saturday at W.L. Pruitt Funeral Home by Bro. Marshall Malone. Burial will be in Hustonville Cemetery. Visitation is 5-8 p.m., Friday.

Pallbearers will be her grandchildren.