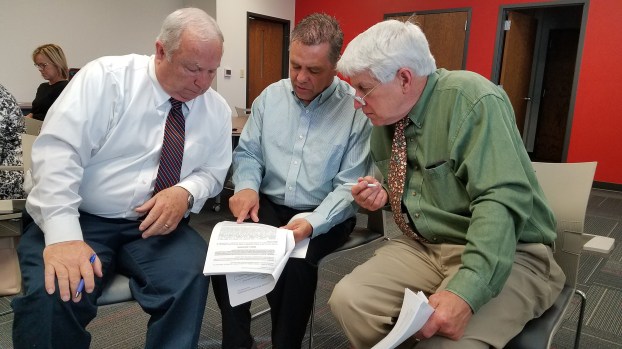 Two Boyle County officials said Wednesday they would like to see the local Economic Development Partnership “streamlined” and public officials given more input when working with prospective businesses. But what those changes might actually look like isn’t clear.

“I do like the idea of streamlining,” Judge-Executive Howard Hunt said during the EDP’s monthly meeting. “I don’t know what that means, exactly.”

Hunt and Magistrate Tom Ellis spoke from their perspectives as members of the Boyle County Fiscal Court during a lengthy portion of the meeting dedicated to addressing recent “concerns” raised by magistrates about the EDP. 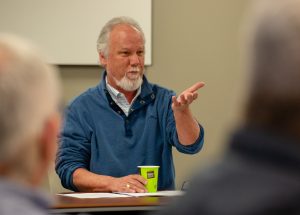 The concerns stem from how a prospective business venture from international distilling company Diageo was handled and why the company ultimately chose to locate in neighboring Marion County, when a site in Boyle County had been a finalist.

The multi-million-dollar facility could have brought between $400,000 and $500,000 in tax revenues for the county with it, Ellis claimed Wednesday.

Ellis suggested the EDP should have a target of at least 10-percent growth and more like 12-15 percent growth in order to provide a good return on investment.

EDP Chair Ben Nelson asked Ellis what his recommendations for changes would be.

“I think some streamlining and I think some more input,” Ellis said, providing the “streamlining” buzzword Hunt would echo later in the meeting. Ellis said he’d also like to see the Danville Mayor and Boyle County Judge-Executive regain voting seats on the Boyle County Industrial Foundation Board.

From there, the discussion took a turn back toward analyzing how the Diageo situation was handled — and what could have been done differently.

Diageo had been considering an approximately 100-acre site in the Boyle County Industrial Park as a finalist for its multi-million-dollar project. But last fall, the Industrial Foundation board decided to withdraw the land from consideration, The Advocate-Messenger revealed publicly in an investigative report published March 2.

Diageo announced last December it would be making a $130 million investment over three years and eventually employing 30 people full-time at a larger property in Lebanon, in Marion County.

Industrial Foundation members have defended their decision to preserve the Boyle County tract for other potential businesses that could bring larger numbers of jobs.

On Wednesday, Danville City Commissioner Denise Terry said she feels if there had been a special called meeting of the EDP and the members had gone into executive session to discuss what the Industrial Foundation was planning to do and why, “I think it would have been better received.”

Nelson said he agreed with Terry.

“If you all believe these nine organizations working together is the better way,” he said, referencing the nine partner agencies who make up the EDP, “it means we talk to each other, we communicate.”

“There’s way too many unilateral decisions being made across this partnership,” he said. “… This was a chance for us to say, ‘What do you think? What do you think?’ I think that’s healthy teamwork.”

Terry said she believes the EDP should be making decisions about whether to offer land for prospective businesses, rather than the Industrial Foundation. 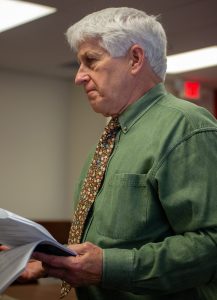 Boyle County Magistrate Tom Ellis addresses “concerns” about the EDP he has. Photo by Ben Kleppinger.

Industrial Foundation Treasurer Alan Turbyfill said better communication makes sense, but “that does not mean that the assets we own and control become EDP assets.”

“No one is being asked to contribute their assets and final control of their assets to this partnership,” Turbyfill said. “What we’re saying is we all want to manage our assets and communicate better, to do better for the community.”

Turbyfill said he believes Boyle County benefits from having the Industrial Foundation, which can operate behind closed doors when public government bodies can’t.

“There is a huge advantage in this partnership to have a private, non-profit, behind-closed-doors, land-acquiring developer as one of the partners,” he said. “… (The Industrial Foundation) can do some things that sometimes need to be done that the group as a whole can’t do.”

EDP board member Cindy Ellsworth brought up the fact that in order for the newspaper to report how Boyle County didn’t land Diageo, someone had to tell the press.

“I would have lost my job if I had ever given information out about the details of a company,” said Ellsworth, who worked for a utility company. “… It gives us a black eye with these site selection committees when this type of information comes out in the public.”

Nelson said he was asking all EDP members to re-sign their blanket non-disclosure statements as a way to remind members of how they agree to behave.

“If you’re going to serve us, that’s how you have to play the game,” he said.

However, Nelson added, that doesn’t mean the EDP should operate behind closed doors any more than is absolutely necessary.

“We get criticized if we go into closed session because we’re a top-secret mafia that’s not being transparent. Have y’all heard that?” Nelson said. “… When I go into closed session, I try to be very judicious about when and why I would do that because of our commitment to transparency and the sunshine laws. But at the same time, we need you as a board member to understand” what projects we’re working on and “how we can move them along. That’s the dance that we’re doing.”

The board discussed how non-disclosure agreements work, and how some businesses play their cards very close to the chest and might only allow one person — EDP President and CEO Jody Lassiter — know what’s going on. That means sometimes, the EDP board, even though it’s Lassiter’s boss, doesn’t know about what he’s working on.

That concept didn’t sit too well with Terry.

“That makes it really difficult as a board member to make informed decisions if we don’t have all the information,” she said. “I know we can’t have 100 percent of the information.”

“Welcome to economic development,” Turbyfill retorted. “It’s complicated. It’s different than most everything any of us have done before. It’s hard. There’s aspects of it that make it difficult to do.”

As the conversation continued into its 40th minute, Nelson felt the need to wrap things up so the board could handle the rest of its agenda.

“I’m not the brightest puppy in the patch, but in the 13 years I’ve volunteered for this partnership, I’ve defended the notion that a private-public partnership is a lot harder to do than one of us doing it by ourselves,” he said. “But the beauty of it is it keeps a check and balance. Denise can keep me straight. I can keep Denise straight. … I will fight that a private-public partnership is hard, it’s messy, but together we’re stronger.

“Those of you who think you could do it better by yourselves? We’re not making you come here. You’re volunteering. It breaks my heart to see us stuck in this loop.”

City and county officials gave some feedback, from their individual perspectives, in the wake of Monday’s city-county joint meeting over... read more