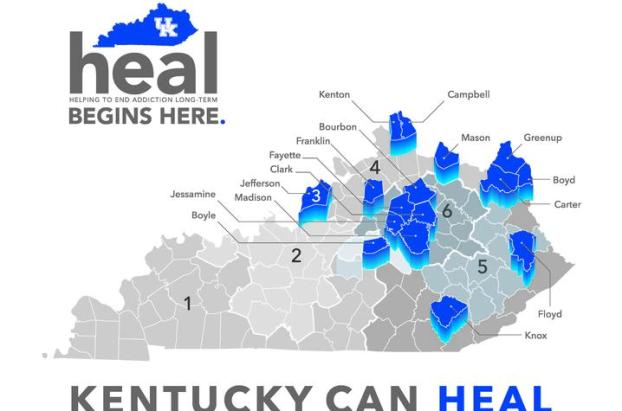 Boyle will benefit from $87M grant to combat opioid overdoses

Boyle County is one of 16 Kentucky counties that will benefit from a massive, $87 million grant from the National Institutes of Health intended to combat the opioid epidemic.

“There have been a lot of people in Boyle County that have been talking to each other today, sending texts and calling. It’s just so exciting,” said Kathy Miles, coordinator for the Boyle County Agency for Substance Abuse Policy, the local group coordinating with UK on the grant. “It’s kind of like UK won the NCAA championship for us in this way. I know it’s not as exciting as basketball, but the drug epidemic affects every community in Kentucky.”

NIH announced it had awarded the four-year grant to the University of Kentucky on Thursday. It’s the single largest grant the university has ever received, according to a news release.

“The goal is to show meaningful change in the overdose death rate in a short period of time and to do so in a way that can reveal what evidence-based interventions are effective in the community,” said Sharon Walsh, Ph.D., director of UK’s Center on Drug and Alcohol Research, in the release. “What will work? Is it distributing naloxone (an overdose antidote drug)? Is it educating people better about evidence-based treatment? Is it expanding access to treatment and decreasing barriers? For example, if we pay for someone to have transportation to get to their treatment program, will that help them stay in treatment?

“We know that people face real barriers accessing treatment and staying in treatment. We would like to remove those barriers because we also know that being out of treatment is a risk for death.”

Miles said there are a variety of possible programs that could be implemented in Boyle County and ASAP won’t know for sure exactly what those will be for about another month. The grant could fund things such as additional staff, perhaps at the Boyle County Detention Center; naloxone kits for inmates leaving the jail; “medication-assisted treatment” for people dealing with opioid addiction; and prevention programs to help keep young people from ever becoming addicted, she said.

Miles said one of the reasons she believes Boyle County was able to be included in the grant is that the community has already come together to work on ways to address the drug epidemic and there’s a higher level of awareness about things like thinking of addiction as a disease among county residents.

“They looked for communities that already had a strong community coalition in place, so they didn’t have to build the structure from the ground up,” she said. 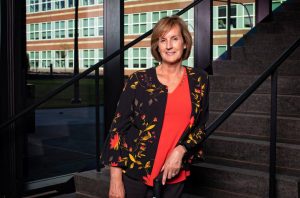 Sharon Walsh, Ph.D., is director of the UK Center for Drug and Alcohol Abuse and Principal Investigator of the study.(Photo by Mark Cornelison | UKphoto)

“Overall, these rural and metropolitan counties had 764 opioid overdose deaths in 2017, with two-thirds of them involving fentanyl (a synthetic opioid many times more powerful than heroin). They also represent about 40 percent of the state’s overall population of more than 4 million people,” according to the release. “The counties involved in the study will be randomized in two separate waves with theory-driven implementation strategies deployed during an initial eight-month phase followed by an observation period to gauge the impacts of the interventions on OD-related outcomes.

“Researchers will work closely with community coalition partners to ensure a community-centered approach and to maximize engagement. In addition, a comprehensive health communication strategy will be used to reach the public, reduce stigma and increase awareness of — and access to — the interventions available through the program.”

Researchers believe strategies tested through the study could reduce opioid overdose deaths by as much as 40 percent. The study’s goals include:

Kentucky is one of only four study sites across the nation chosen to receive a grant through the NIH HEAL (Helping to End Addiction Long-term) Initiative, which aims to “develop evidence-based solutions to the opioid crisis and offer new hope for individuals, families and communities affected by this devastating crisis.”

Miles said the reaction to the grant she’s heard from those involved locally in addiction and recovery efforts has been, “Wow — we have so much to be thankful for.”

“This brings up for a lot of us that we live in a very special community,” she said. “We have people that are willing to give time and energy and thought and prayers and money and everything. This crisis has become everyone’s, and we own it as this community. That’s not true everywhere.”

The two juveniles who were arrested in connection with a rock-throwing incident that caused a Boyle County Sheriff’s deputy to... read more