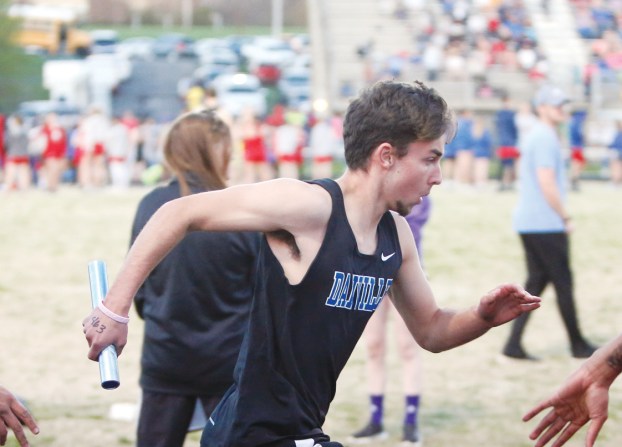 From soccer to the track: Four Admirals add depth to track team

Soccer players get in plenty of running, but they don’t run like this.

Four Danville soccer players who have joined the school’s boys track and field team this spring have come to learn that the running they’re doing on the track is far different from what they have done on the soccer field.

Even so, all of them are enjoying their venture into a sport whose coach has been trying for some time to sell them and their teammates on the value of running track.

“To be honest, it’s tougher than I thought it would be, because I’m used to sprinting short distances and then recovering in soccer,” senior Alec McAlister said. “But I wanted to get my fitness better, I wanted to get faster, and it’s definitely helping so far.”

McAlister and juniors Sam Brunner, Ethan Redmond and Briar Sanders came out for track at the urging of Danville coach Chris Verhoven, who has been trying to get soccer players on his team for years with occasional success.

“We’ve always tried to get soccer players, but soccer’s a year-round sport for some of these guys,” Verhoven said. “We try to sell it to them, at least, that if you want to be better at soccer you’ve got to be faster and stay in shape.”

“Coach has always been wanting us to come out for a long time because he knew we had a lot of stamina and speed, and we all kind of wanted to,” Brunner said.

The four players who have come out this spring said they think running track will help them as soccer players and will add to their high school experience. It also adds depth to a track team that is looking to repeat as Class A boys champion.

“Hopefully they’ll see this equate to soccer, but even more hopefully they’ll learn that this is a pretty competitive sport and it’s pretty fun,” Verhoven said. “We’ve converted several soccer players that never thought this was anything other than training for their ‘real’ sport, and they’ve learned to love this. Hopefully that trend will continue.”

Sanders has gotten more time on the track so far this season than his three soccer teammates because this is the only sport he’s involved with this spring.

“I wanted to obviously get better for the soccer season, but I also just wanted a challenge and something different,” Sanders said.

Redmond, Brunner and McAlister continue to play for club or travel soccer teams, and the latter two also are playing for the Danville tennis team – coached for the first time this season by boys soccer coach Brent Beauman.

All four athletes said they think it’s good to experience as many things as you can in high school.

“It’s great, being in as much as you can,” Brunner said. “You only get just a short time in high school, so you’ve just got to make the most of it.”

“I think it really contributes to your bonds and friendships with other classmates,” McAlister added. “It’s also just really fun to contribute to other sports. It’s not necessarily that I want to be the best tennis player I can possibly be, if I can help the team, if I can help coach Beauman, if I can help my school, I feel like it’s something I can do, especially if I can balance it with my other sports.”

Verhoven noted that participating in multiple sports can help them, too.

“All the studies will show (the benefits of) playing multiple sports instead of concentrating on one,” he said. “I think it makes you a more marketable athlete in college, even if that’s not your goal. It makes you a better overall athlete, trying a different sport.”

The foursome was recruited in part by some of their track and field teammates, including hurdler Gabe McKnight, who joined the soccer team last season.

“He was always talking to us, trying to get us out there,” McAlister said.

“It’s a small school, everyone knows each other,” Brunner added.

McAlister said he almost joined the team last year and had promised Verhoven he would do it this year.

“I just thought, ‘It’s senior year, I’ll come out here with my friends and do something different and get faster at the same time,’” he said.

He said Sanders was probably the first of them to join the track team.

“It definitely was a little of a group decision because once one of us was interested in coming out, it was, ‘OK, maybe,’” McAlister said.

The four athletes said learning the form required to be successful on the track has been the hardest thing for them to learn so far, which comes as no surprise to Verhoven.

“A lot of people think, ‘I run when I play soccer,’ and I say, ‘Come out and see how competitive it is and how technical it is,’” he said. “We try to tell all of those guys … just simple things about arm placement, arm drive and leg drive. And we talk to them about how when they’re dribbling a soccer ball they’re looking down and moving laterally. Track is all about moving forward, and it’s more of a relaxed run.

“It’s a whole different mentality. It’s not anger, it’s not aggression, it’s not a contact sport. You have to run relaxed, but yet it’s got to be explosive, it’s got to be under control. And when you get tired and your form breaks down, you just see people look ridiculous.”

The addition of these four boys has made for better competition in practice for spots in individual events and on relay teams.

“It makes it a lot more fun, because we have a lot more runners that are pretty good,” Redmond said.

“We couldn’t be happier to have them,” Verhoven added. “They have been contributing, and the more we get into the season, I think they’re going to contribute even more.”

They would love to contribute to a second consecutive state championship for the Admirals.

Danville bounced back in a big way on Wednesday. In the second game of a 45th District back-to-back, the Admirals... read more