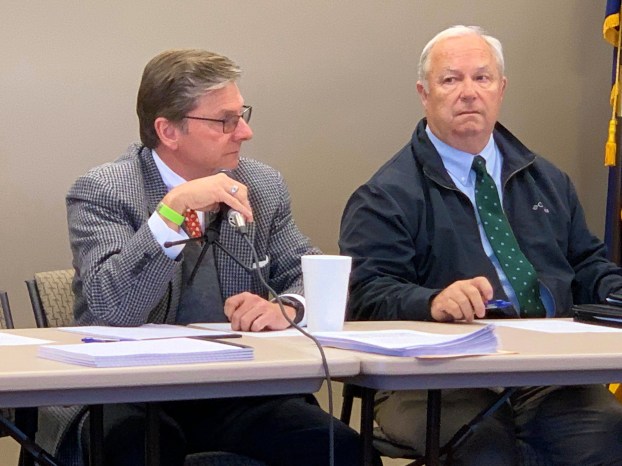 City and county officials gave some feedback, from their individual perspectives, in the wake of Monday’s city-county joint meeting over the Danville-Boyle County Parks & Recreation agency.

As City Attorney Stephen Dexter has stressed, the parks ordinances — created in the ‘90s — are outdated, as far as clearly defining what the agency’s board is tasked with and what exactly is under the purview of Parks & Rec as a whole. The major sticking point so far with the fiscal court is that the county should not be responsible — as it never has been — for upkeep of the smaller neighborhood parks, only its 50/50 partnership with the city for Millennium Park.

Boyle County Judge-Executive Howard Hunt stayed mostly quiet during the joint meeting, and said he did so purposely. He went into it with the viewpoint of participating in a working session as opposed to debating specific funding points, which are to be outlined in a service agreement that will follow the ordinance update.

“From my perspective … Let’s hear it through before we start defining words and changing meanings,” Hunt said Thursday. But the two sitting in front of him, he said, began raising concerns “right on the first sentence on the first page.”

Hunt was referring to magistrates Phil Sammons and Tom Ellis, who first stopped the slide presentation due to issues with its title, since it contained the word “parks” instead of just Millennium Park. He said he refrained from jumping in, at first, in order to let them “get it off their chests.” But, at one point later in the meeting, Hunt could be seen leaning forward in an attempt to reign the two magistrates in.

“There’s absolutely nothing I want to hide about this,” Hunt said, but he said he felt there were better ways to bring up their concerns. He said Monday’s meeting was “not a stellar representation of open communication, but it’s still better than not talking at all.”

He said there is an obvious level of mistrust toward the city by some on the court  — something he and Mayor Mike Perros have been trying to work through together to change. “We will get there, though. We will get there,” Hunt said.

Perros said, “Except for a couple of isolated incidents, I felt the meeting was positive. I felt as though there was common understanding and, to a degree, a common agreement.”

That agreement is to wait for Dexter to draft two different ordinances, one including the entire parks system, and the other just including Millennium Park.

When the information specifying what parks the board oversees came up during the meeting, Commissioner J.H. Atkins left the original wording in, already on the books: “The Board shall provide, maintain and operate parks, playgrounds, recreation centers and buildings thereon according to the law.”

“All of these facilities reside inside of the county,” Mayor Perros said Thursday. “To create a boundary that says what’s inside the city is not inside of the county is a real challenging point of view.” He said the city will remain responsible for the neighborhood parks, “but you do find that county people do use what are being called ‘city parks,’” he said.

He said he feels like there’s a perspective of the Parks system that needs to be recognized. “That city parks do reside inside the county. Ultimately, I’d love to see it where they didn’t say this is theirs and this is ours. That thought pattern has existed for too long, and we’re not big enough to enjoy that thought pattern,” he said. Perros said he relies on an old adage he’s used before: We are stronger together.

“I’m open to this, but I feel like most of the court is in agreement Millennium is where we want to put focus,” Judge-Executive Hunt said. But he agrees with some of Magistrate Jamey Gay’s position, “that we may be able to help the overall situation through the funding service agreement for the whole system. I feel like there’s a way we can collectively make a contribution to Millennium Park, and conceptually potential others.”

City Manager Ron Scott, who was not able to be present during Monday’s meeting, said, “The city clearly has taken the lead trying to assess our community’s needs for Parks & Rec services,” which resulted in the “long effort” to produce the master parks plan. He says that study caused them all to “get out of our comfort zones a bit in terms of trying to deal with the reality …” that almost 50 percent of the local population is not being served through Parks services.

When Scott was asked about Magistrate Jason Cullen’s assertion made during the meeting — that neighborhood parks have been unmaintained for years by the city, and now the county is expected to join in “flipping” them for revitalization — Scott didn’t disagree.

“… it is historically accurate that in the enthusiasm of the county and city to join together, in terms of creating that very nice park facility (Millennium), we sort of — as a city — let the neighborhood parks decline.”

At least as a city, Scott said, they are attempting to address those issues. “Simply because we may have not spent money in the past doesn’t mean we don’t want to do that.”

Scott said if the outcome of “this entire process is a redefinition,” as far as what the Parks & Rec Board oversees, “it may cause the redefinition of our mission, vision and values,” which right now specifically calls for a “unified system” between the two governmental entities.

“If we’re curtailing on one side, we may have to expand on the other if we’re going to meet needs. That’s a challenge for both entities, due to limited revenue,” he said.

Scott got wind of Magistrate Sammons’ comment during the meeting that the city micromanaged the former Parks & Rec Director John Drake, and that Scott “wanted everybody to answer directly to him,” which Sammons said led to the “trouble we’re in now.”

“I appreciate a defense being made in my absence,” Scott said about the mayor and others rejecting the magistrate’s claims. “I’m not sure about the motivation there. I haven’t initiated anything that’s not recommended in the study itself.”

Scott said if the county does not want to participate in the overall Parks program, “We will do our best to expand and meet these needs. But we hope the county can help so that county residents can equally participate. But we understand that there are financial challenges to the county.”

Both Perros and Hunt said Dexter’s approach of creating two different ordinances, in order to explain what the overall system will look like based on what parks each entity is responsible for, was a good solution. “We just need to take the two drafts and come back, let everybody take a chop on it and see where it goes from there,” Hunt said.

The Danville-Boyle County Economic Development Partnership has hired two local people as contractors and a Centre College graduate as a... read more