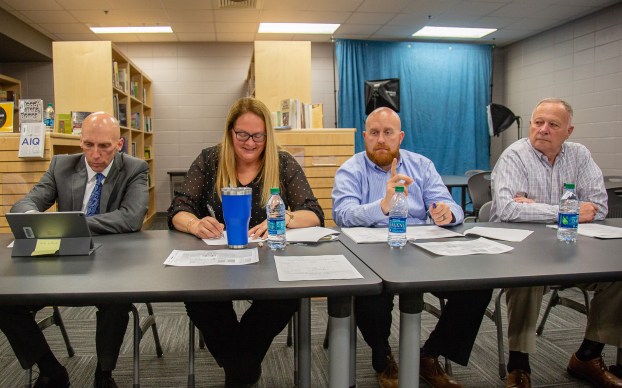 The Boyle County Board of Education gave final approval Thursday to a policy that will require most middle- and high-school students to be subject to random drug tests.

The board voted unanimously and without discussion in favor of a second reading of a revised Use of Alcohol, Drugs and Other Prohibited Substances Policy.

District staff will now begin to work on specific procedures concerning how drug-testing will be implemented, and the district will seek proposals from drug-testing companies interested in providing their services before drug tests could begin next school year, according to Superintendent Mike LaFavers.

The policy will require random drug-testing of all students from sixth through 12th grades, regardless of whether they are suspected of using drugs, if they choose to participate in extracurricular activities or drive themselves to school.

The revised policy will also require teachers to receive training in drug awareness, and provide education for parents about drug use, according to Pam Tamme, the district’s director of health who led the committee that developed the new policy.

“The purpose of the proposed random student drug-testing program is to protect our students’ wellbeing,” Tamme said at a public forum about the drug-testing policy in March.

U.S. courts have ruled that requiring all public school students be drug-tested is unconstitutional, but they have allowed school districts to require drug-testing for optional activities such as athletics, clubs and driving to school. The policy is expected to subject about half of middle-school students and three-fourths of high-school students to monthly random drug tests.

Specifics about how the policy will work must still be finalized, but according to what Tamme said during March’s public forum, students who test positive for drug use will face three tiers of punishments:

• After a second positive test, a student would lose participation time in their voluntary activities and student drivers would be denied driving privileges for nine weeks. Mandatory drug testing would be required for another year after the date of the second offense.

• After a third positive test, a student would be barred from voluntary activities and driving for one year.

“Here’s what it’s not,” Tamme said in March. “The consequences or sanctions will not include suspension or any other sort of disciplinary action beyond the loss of some participation in those voluntary activities. There will not be any academic consequences or penalties and there would be no law enforcement action for failing a mandatory random student drug test.”

LaFavers said Thursday he was grateful to Tamme for the hard work and many hours she and her committee put in to develop the policy. Tamme joked that it seemed like it had taken “400” months to finish, when it really took six.

“I know how much time has been put into it,” she said.

By ROBIN HART and BEN KLEPPINGER advocate@amnews.com Nathaniel Doneghy has a soft spot in his heart for his former classmates and... read more