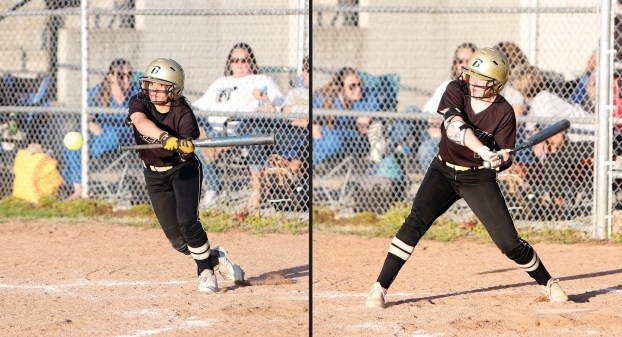 Photos by Mike Marsee Boyle County’s Izzy Gervacio (left) and Hailey Cannon (right) have starred for the Rebels at the top of the lineup. Part of their success is because of their speed: Together, they have stolen 27 bases in 27 attempts.

They are Boyle County’s bunnies, and they are at their best when they are on the basepaths.

Izzy Gervacio and Hailey Cannon keep Boyle’s opponents hopping by using their speed to get on base and get into scoring position.

Gervacio, a junior center fielder, and Cannon, a sophomore catcher, have teamed to reach base in almost 50 percent of their plate appearances and to score more than 30 percent of the Rebels’ runs so far this season with an effective combination of slap hits and stolen bases.

Both players regularly use the slap-hitting technique in an attempt to reach base, and both have been perfect in stolen-base attempts for Boyle, which entered the weekend with a 17-5 record and a No. 9 statewide ranking.

It’s a way of putting pressure on opponents with what are in effect two leadoff hitters at the top of the lineup, which is a key element of coach Brian Deem’s game plan.

“It’s very important,” Gervacio said. “He always tells us that if you put pressure on them there’s more room for mistakes, and so that’s good for bunnies.”

Gervacio and Cannon are the bunnies — Deem calls the two left-handed slap hitters bunnies, while the right-handed power hitters behind them are sharks.

“It’s important for our bunnies to get on so that our big hitters in the middle to the end of the lineup can hit us around,” Cannon said.

Deem relies on a maxim often used by Ed Rall, the former baseball coach at Boyle and at Centre College, to impress upon the two girls the importance of getting on base in order to get around the bases.

“I always tell them — and I quote Ed Rall on this — you can’t steal first (base), so you’ve got to find a way to put the ball in play,” Deem said. “They’re my bunnies and they do a great job of executing and getting the ball down and letting their speed take over. That’s a huge plus for us when we can get them on base.”

That has happened a great deal so far this season. Through Thursday, Cannon and Gervacio had reached base via base hits or walks 81 times in 22 games.

“It really drives the rest of the lineup if we get on base and they see us out there,” Cannon said.

Gervacio, who bats leadoff, is hitting .386 with 27 hits in 70 at-bats and has walked a team-high 12 times. She leads Boyle in stolen bases with 17 in as many attempts and in runs scored with 23.

Both girls have become adept at slap hitting. Both have practiced the technique for years, and both said they have come to prefer it.

“I think it’s easier to get your timing down because you have to run through the ball and you have to know when to do that,” Gervacio said. “It’s just easier.”

“Timing is so much easier,” she said. “Since we slap so much, when we actually try to hit away, most of the time our timing is early because we’re so used to taking that extra step.”

Gervacio said her approach at the plate is to do whatever she can to put the ball in play.

“All I’m thinking in my head is just getting the ball on the ground and running as hard as I can to first,” she said. “Coach DeBord always tells us there’s a better chance of us getting on base if we put the ball in play rather than looking for a walk.”

Cannon’s approach often depends on whether Gervacio has reached base ahead of her, but she’s always looking for a good pitch to hit as soon as she steps into the batter’s box.

The two girls have played together since their early days in middle school, and both have come to love the game.

“It’s a game of failure. You really have to be mentally tough to play the game, and I think it takes a special type of person to play the game and be good at it,” Cannon said.

They are part of a young Boyle team that Gervacio said might be even closer than last year’s squad that won a second consecutive 12th Region championship.

“We were really close last year, but this team, there’s just something about us. We’re just really close and all of us are really tight, and we just have a trust that wasn’t like last year,” she said.

“We really mesh together, and we know what somebody’s going to do before they do it,” Cannon added.