Kirkland has enjoyed the opportunity to become involved

Kennedy Kirkland is a standout freshman at Boyle County High School with a unique journey. Kirkland began her elementary school days in Florida at both Shannon Forest Christian School as well as North Florida Christian. Heading into middle school, though, life took a sudden turn. When Kirkland was twelve years old, her family was faced with a difficult decision. “It was when I was in the sixth grade, my dad was hired by the Arizona Cardinals [to coach football] two weeks before school started. My family had to make a decision in a quick amount of time, so I came to live with my grandparents in Kentucky.”

Enrolling in August at Boyle County Middle School, Kirkland found new activity opportunities never seen before at her other schools. “I was never able to play sports, be in a drama program, or be in gifted and talented before.” 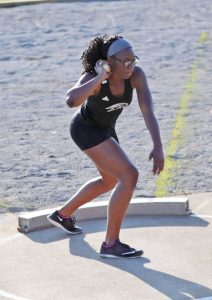 It is interesting how Kirkland became involved in one particular activity her seventh grade year. “I did not have a ride home after school one day and did not want to sit awkwardly in the lobby for two hours, so I went to volleyball tryouts. Actually, I didn’t even want to play volleyball,” she said with a smile.

She made the team and really enjoyed the experience. It was her first opportunity to play a sport, but it would not become her only chance as she entered high school.

Kirkland’s freshman year included a drama class that she fell in love with. “We spent time playing drama games and doing small performances to work on our emotional range.”

This led to an interest in a new activity. “I am in the drama club because I have always had a love for acting. Being able to transition into various characters and to become somebody different is what I most enjoy about it.”

Another interesting story led Kirkland to her second sport opportunity. Track and field coach Brent Wagner noticed her athletic ability while playing high school volleyball and was hoping to convince Kirkland that she needed to join the team. His method was a little unconventional but proved to be effective. “I started track because Coach Wagner would bribe me with candy, and I felt bad because he spent like $17 on various candy bars,” Kirkland laughingly shares.

A relatively quick decision years ago to move to Kentucky has certainly worked out well for Kirkland. “The thing I most enjoy about Boyle is the opportunities I have been given.”

For a young freshman currently interested in drama, painting, playing the piano, track and volleyball, it will be fascinating to see where her journey takes the next turn.