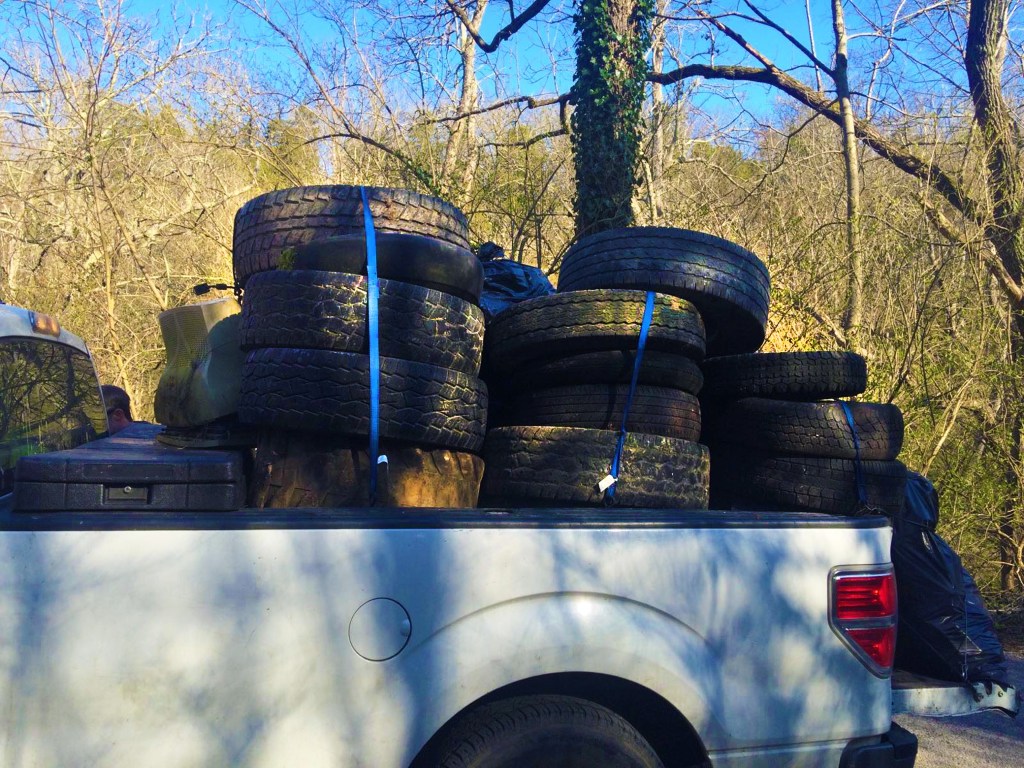 Although Angie Muncy says the Boyle County community may look good compared to other places, she’s still perplexed by how much litter and other trash is pulled from roadsides.

“Go look in my car. I pick up things all of the time, and once I get gas, I clean it out and throw it away.”

Solid Waste employees are out constantly, picking up litter or hauling off large items dumped on roadsides. Supervisor Marty Maddox, who’s been with the department for about 26 years, takes a crew out five days a week. 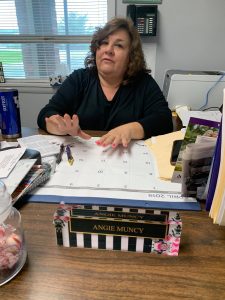 Angie Muncy, director of Solid Waste in Boyle County, is perplexed by how much litter and trash is picked up from roadsides. Solid Waste employees are constantly picking up litter and hauling off large items dumped on the sides of roads.

And the issue doesn’t seem to be letting up.

In 2018, a total of 26 tires, 14 couches/chairs, nine mattresses and nine miscellaneous items (wood, pool liners, doors) were collected. So far this year, 145 tires have been picked up; 11 couches/chairs; five mattresses; two televisions; and one load of trash.

Muncy took some time out of her schedule Friday morning to talk litter, along with Maddox and two inmate workers, Justin Sizemore and Robert Seward, who see first-hand what community members dump on the roadsides or chuck out their car windows daily.

“The most common thing we see? Probably tires, mattresses and needles,” Maddox says. He uses the area of West Knob Lick as an example. “We hit that once a week — that’s where all the needles are, right in the curve.”

Sizemore says they never find only one syringe; sometimes they’ll see one, but on up the road, inevitably there will be more. Maddox and his crew fill up his truck bed with collected litter and take it to the closest dump, either Gose Pike or Alum Springs.

“Just the other day, we were up on the railroad tracks on West Buster. A train had just went by, and a white truck a few cars back threw trash out their window,” Sizemore said, which was within eyesight of where the crew was picking up.

When they’re cleaning a roadside, the trash is bagged and left on their path until they complete it. “When we go back to get the bags of trash, people have thrown more stuff out near them, so there’s more to pick up,” Sizemore said, shaking his head.

“It’s pitiful, because as an inmate, people think just because you’re out there picking it up, it’s OK to throw it out,” Muncy says. She’s even had comments made to her making excuses for littering: “They say, ‘That’s OK, they’re inmates; it gives them something to do.”

Although Seward says he’s always tried not to litter, both inmates see the problem differently now that they’ve been doing the job for a while. Seward has been picking up for a little over a month, and Sizemore for seven months. 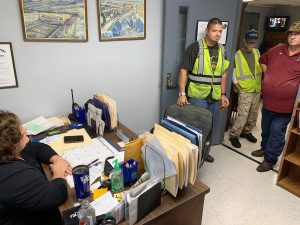 “I’ll be honest — I used to throw stuff out the window. But after doing this, I don’t want to throw trash out anymore,” Sizemore says.

Muncy says that’s a sentiment she’s heard continually over the past 14 years that she’s been involved in solid waste. “If you pick it up one time, you’ll never throw it out again.”

Maddox said just the other day, the crew picked up “30-something bags of trash off Mitchellsburg Knob, just coming down the hill, including about seven tires, just on that quarter-mile of roadway.”

“Around here closer, I don’t know … Danville must’ve had a mattress sale or something,” he says, in reference to how many old mattresses they find on roadsides — especially on Buster Pike. He says there’s a pull-off by the railroad tracks, and people just pull in, dump and take off.

Baughman Lane is also a troublesome area. Crews collected four bags of litter there in one day, in less than a quarter-of-a-mile stretch. Gose Pike is also bad due to people hauling loads to the convenience center and not properly covering their truck beds.

Maddox says litter is getting worse closer to town, more so than “out in the country.” Muncy attributes this to people driving through while eating, and tossing their containers and other trash out car windows.

Fourteen bags were collected from Maple Avenue the other day, and that was just from a part of the road. They constantly work the U.S. 150 bypass. “As soon as you go around the curve — we picked up 20 bags just there, just around the curve,” Sizemore says.

On Stoney Point Road, off of Lexington, the crew picked up 82 tires in three days. Muncy thinks people are dumping them off the hillside into the creek, and others are picking them up and moving them up to the road for Solid Waste to collect, which she is fine with. Citizen clean-up groups usually notify her office to let them know what’s going on, which helps.

Tires are especially troubling, because it seems to lead to others thinking it’s OK to dump them, she says. “We gotta get rid of them fast, or more will be coming.”

Muncy said Maddox’s crew picked up 12 bags of trash down in the gully near a business out on the bypass. They picked up about six bags from behind a gas station off Denmark Drive —  an issue they think happens due to people throwing away bags of unclosed trash into dumpsters. The wind catches the pieces and off they go, landing in other areas.

Maddox says they’ve seen several cases where people don’t want to pick up trash as they’re mowing, and simply go over top of it, which chops it up and scatters it everywhere.

Commercial trash haulers can be some of the worst violators; Muncy often receives calls about a garbage company that doesn’t cover its loads. She has to get in contact with them, and they return to the area to pick up their mess.

Muncy says if she’s out on any of the “main drags of town, if I think it’s bad, there’s where we’ll go first. There’s no area that’s more important than others … but the main arteries into town are what visitors see first.”

She says more people should be more fired up about litter, not only from an environmental standpoint, but from a cost standpoint. “All that litter abatement money? It’s taxpayers’ money, and the state gives out $4 million and $5 million for litter (control). That should make taxpayers’ mad that it’s even needed,” she says.

Anyone who sees dumping or littering going on can contact Solid Waste, she says, but it’s hard to catch people in the act or prove they dumped a large item. In an attempt to catch violators, Muncy plans to purchase cameras to set up around problematic areas.

The bottom line, Muncy says, is that litter is an everyday occurrence. “However, no matter what anyone thinks, Boyle is actually in good shape. But I come from Eastern Kentucky …”