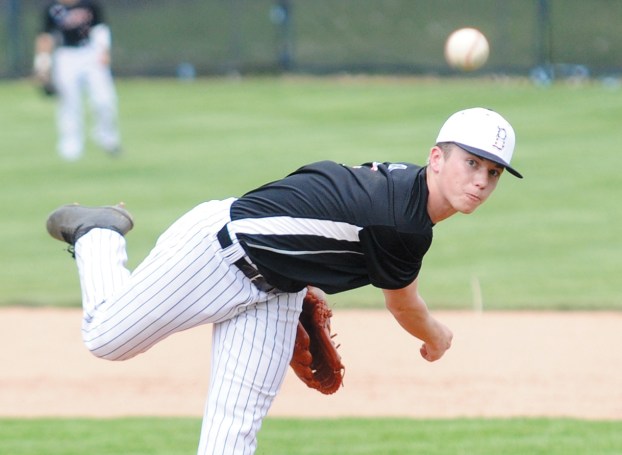 Kyle Wynn didn’t like what he saw from his team in the early innings against Lincoln County.

After the Patriots posted a three-run sixth inning, he had to step in.

Wynn rallied his team and they responded in the bottom of the sixth inning, adding two insurance runs to help Boyle County take down Lincoln 6-3 in a 45th District tilt.

“We just talked about it there. Things are contagious: Contagious in a good way, where if the energy, attitude and effort is there, it can sail, kick off and roll,” Wynn said. “You think of how big innings happen, they keep going, who has the momentum. On the other side, if there’s no life, no hits, then it snowballs after that. Unfortunately it can be contagious in a bad way, and it was there toward the end and we finally had energy there in the last inning.”

Boyle ended two of the first three innings with the bases loaded and had just a 3-0 lead to show for it.

“We scored six runs tonight, we could’ve easily put on double digits if we get those baserunners in,” Wynn said. “I think that’s the key: We had them, I think we just thought we were there and it would happen easily instead of buckling down and having that ‘play to win’ attitude.”

Boyle’s offense could thank starting pitcher Eli Glasscock for keeping the Patriots off of the board: Glasscock pitched five shutout innings and allowed just two hits to go with four strikeouts. He didn’t walk a batter.

Glasscock was also the best weapon on offense for the Rebels: He went 3-for-4 and scored four times.

“All-around he played well, obviously helped himself at the plate and scored a few runs,” Wynn said. “He kept us in it when we weren’t doing much offensively. We are trying to keep some guys on pitch counts here in the middle of the season, he was pitching well for us. We’re just trying to limit things now and make sure we’re all strong toward the end of the year. Eli did a great job on the mound and at the plate.”

Lincoln would score all three of its runs in the sixth inning as Boyle’s relief pitcher Collin Carver entered the game. Carver relaxed in the seventh inning and didn’t allow a run. He struck out two batters in the final two innings.

“I liked that our team didn’t give up,” Lincoln head coach Tee Ellis said. “It’s easy to quit, especially when you’re down a few runs to a good team like Boyle County, and with the season we’ve had so far. But our guys, we don’t give up. The final score might not be what we wanted but we didn’t give up, I’m proud of that.”

Shane Brown earned the start for the Patriots and worked his way out of those two early bases-loaded jams. He allowed six runs (four earned) while striking out five batters through 5.1 innings.

“This is his only third or fourth time throwing this year, he’s starting to get in a groove,” Ellis said. “Our defense is confident when he’s on the mound because he’s good up there.”

The Patriots have Sawyer Carrier back in the lineup, and he led the team with a pair of hits and a run scored in the loss. Ellis was happy with the way his team was aggressive in early in counts and delivered six hits.

“Tonight we were aggressive early in counts, swinging the bats,” he said. “That’s something we’ve been working on in practice, our approach at the plate. It showed tonight, we were looking to swing at that first-pitch fastball, something we haven’t done all year. That’s a positive from tonight.”

After Wednesday’s tilt at Lincoln, Boyle will turn its attention to the Louisville Invitational Tournament this weekend.

“It’s good competition this weekend, we’re making sure we have a lot of guys ready,” Wynn said. “Three good teams in a row, that’s why we want to go up there this time in the year. That’s why districts is good when we do it this way, three straight weeks and now we can go compete on these weekends. It doesn’t get easier, but we’re hoping we’re prepared to compete in the postseason like we have in the past.”

By JOE MATHIS Contributing Writer LEXINGTON — If you were to tell Danville head coach Paul Morse that his team... read more