LEXINGTON — Lancaster resident Alex Miller won a semi-finalist spot in the Pigeon Forge Path To Fame talent competition on Saturday, March 30. Miller will compete against 11 other performers for the grand championship prize on June 22 in Pigeon Forge, Tennessee.

Miller, 15, is one of four semi-finalists selected from 34 Path To Fame contestants at the historic Lyric Theatre in Lexington. A singer/songwriter, he performed “I’m Over You, So Get Over Me,” a song he wrote, to earn his semi-finalist spot. 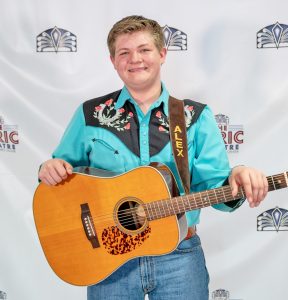 Miller began performing 12 years ago and has taken the stage at Renfro Valley, Ross Country Jamboree, and the Kentucky Music Hall of Fame. His love of traditional country music and the sounds of Hank Williams, Sr., Ernest Tubb, Bob Wills, Merle Haggard and Buck Owens are evident in his vocal delivery.

“Lexington drew a wide variety of exceptionally talented performers to our Path To Fame auditions on Saturday,” said Nashville entertainment executive John Alexander. “Alex and the other three finalists certainly established themselves as contenders for the grand prize to be awarded at the June 22 finals in Pigeon Forge.”

The final Path To Fame talent competition auditions are in Birmingham, Alabama, on Saturday, April 13, at WorkPlay.

The team, Off the Wall Indiana Bakers, with staff Sara Smith and resident Gilbert Asbury, was the winner of Danville... read more