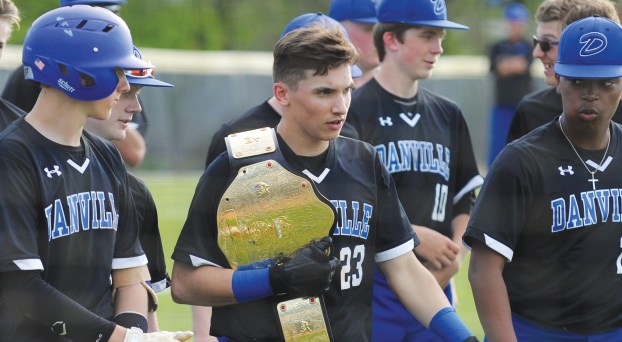 After a record-setting performance on Tuesday, turning around and playing 24 hours later wouldn’t be easy.

Danville shook off a slow start to beat Garrard County 15-5 in five innings, securing the top seed in the 45th District tournament on the way.

“It’s always great to get that one seed, if nothing else it’s confidence for the guys, playing well,” Danville head coach Paul Morse said. “That’s something we haven’t had in the past couple of regular seasons. That’s a good thing.”

The Admirals hit just two home runs compared to the seven from the night before, but it was Garrard who would get the first runs of the game.

The Golden Lions opened the game with their first four batters reaching base, resulting in a 2-0 lead.

And starting pitcher Ashton Smith did well to put a zero on the scoreboard in the bottom half of the inning.

But things changed in the second: Hunter Baxter replaced Jack Simpson on the mound and allowed one baserunner and no runs in the top half. Then in the bottom half, the Admirals poured in seven runs, capped by a three-run home run for Preston Barnes.

It was Barnes’ third home run in two days and his sixth of the season.

Garrard would capitalize on a hit batter and scored two more runs in the top half of the third inning to cut the Admirals’ lead to 7-4.

Danville responded with its second-straight seven-run inning in the bottom half of the third inning.

Cayden Shaver would allow one run in the fourth inning before a shutdown fifth, and Ethan Wood cranked his ninth home run of the year in the bottom half of the fifth inning to end the game 15-5.

The final score was a well-earned rebound after the first inning, coach Morse said

“I don’t think we came out as focused as we did yesterday, it’s kind of hard to do that,” coach Morse said. “And playing three days in a row, we scheduled games like that to try and prepare for the regional tournament time. It’s good to do that, but it’s also hard to up for that third day. Guys tired, getting home late. But after that first inning or so, we did well. We’ve just got to throw more strikes there early in the game.”

Garrard was led by a 3-for-3 performance from Aiden Foley, who also scored three times. Starter Ashton Smith was 1-for-1 with an RBI and two walks, and leadoff man Andrew Dailey was 1-for-2 with a walk and one run scored.

With districts set and May around the corner, both teams will be preparing for the final two weeks of the regular season.

“When it gets to districts, everybody’s 0-0,” Morse said. “It doesn’t mean a whole lot except we get to wear white uniforms. That has its benefits. We won the district last year so teams are going to be gunning for us. We’ll have to be focused for that. I’m pleased overall for today, now we’ll get a couple days rest and get ready to go on Saturday.”