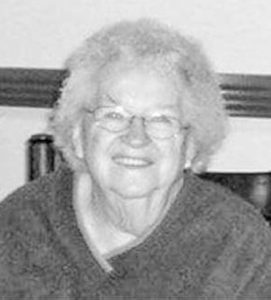 Ellen Edna Viola Morrison Ball, 92, of Lancaster, Ky., passed away Wednesday, April 03, 2019. Born on Wednesday, September 08, 1926, she was the daughter of the late Linford and Agnes Elicia Hendrica Davis Morrison. For the past 11 years, she resided in Lancaster with her daughter, Pennie (Ruth Ellen) (Arthur J.) Tharp. She was a member of Lancaster Methodist Church where she enjoyed spending time with her friends every Tuesday morning at Bible Study. Ellen graduated with honors in 1945, from Bridgeton Sr. High School in New Jersey. She was a giver and enjoyed knitting and crocheting hats, scarves and other items to donate to people in need, as well as for her friends and family. Her giving nature led to her decision to donate her body to the Bequeathal Program at the University of Kentucky.

A celebration of life will be held at 11:00 a.m. Saturday, April 27, 2019 at the Lancaster Methodist Church with Rev. David Terry officiating. Pallbearers include her bible study group at the church.