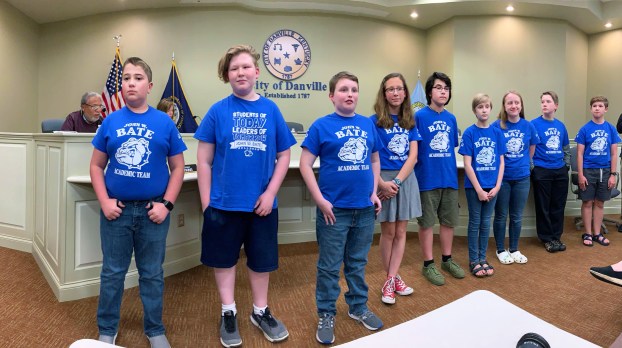 Nine of the academic team’s 14 members, as well as it’s coach, Tony Carney, accepted the honor for the team, and received two standing ovations. The team competed against 16 other middle school academic teams in the region in March, and finished 16 points higher than the second-place team.

Carney said many on the team had other activities scheduled for the evening, such as soccer. “It’s a small district, our kids do everything,” he said.

The team went on to compete in the Governor’s Cup in March at the Galt House in Louisville, and made it to the Sweet Sixteen in team competition, finishing seventh out of 300 schools. It was the only middle school in the state of Kentucky that earned two state championships at the competition.

Mayor Mike Perros said “Quiz time!” and went down the line of the nine present with a microphone, asking them their favorite subjects in school. Answers ranged from science to math, language arts and history, 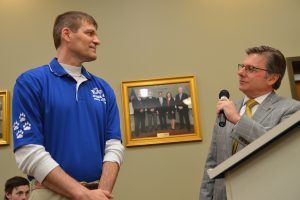 “No recess, no playground ….” Perros pointed out. “Congratulations kids, you represent us well.” He also asked the parents in attendance to stand up, who also received an ovation. “Coach Carney? How long have you been doing this? …” Commissioner Kevin Caudill asked.

Carney said he’s been leading the team for 25 years.

Carney said the team will be competing over Mother’s Day weekend in Chicago for a national championship, but will also be competing in June for a second national tournament.

“We’re one of the few teams in Kentucky who have actually won a national championship — not too many teams in the state who can say that,” Carney said.

Carney said the kids vote before trips, making a list of sites they’d like to visit while in Chicago, as they did last year when they finished in the quarter-finals. They’ve been to the Science Museum, the Art Institute and several different downtown attractions.

“We try to do as much as we can while we’re there,” Carney said. 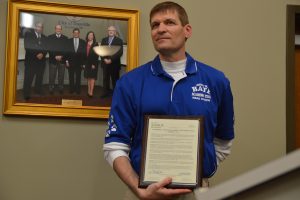 Coach Carney stands with the proclamation for the the John W. Bate Middle School Academic Team winning the 2019 Region 16 championship. He has been leading the team for 25 years. Photo by Bobbie Curd.

Two other proclamations were also issued Monday during the commission meeting. Pat Boatright, president of Boyle Landmark Trust, and James Hunn accepted one in honor of Historic Preservation Month, designated for May. Perros said the preservation of the state’s historic buildings and sites is a proven economic development tool that creates jobs, attracts investment and revitalization in downtowns and neighborhoods.

Preservation was established as a public policy under the National Historic Preservation Act, providing the framework for the state’s legislature to create local preservation offices in 1966; amendments to the act in ‘80 enabled partnerships between federal, state and local governments.

Perros said the City of Danville and Heart of Danville have been a Certified Local Government for many years, in partnership with the Kentucky Heritage Council and the National Park Service.

In the “better late than never” segment of proclamations, one was issued to honor Equal Pay Day, which was observed on Tuesday, April 2. It’s been more than 40 years since the passage of the Equal Pay Act and Title VII of the Civil Rights Act, yet women and people of color “continue to suffer the consequences of inequitable pay differentials.”

The proclamation states that full-time working women earn only 79 percent of the earnings year-around, as full-time working men, indicating little change or progress in pay equity. Those stats are according to  the U.S. Census Bureau, U.S. Department of Labor and the American Association of University Women.

Data by the U.S. Department of Labor Statistics says women earn less in every occupational classification, including those dominated by women — such as cashiers, retail sales, registered nurses and teachers. But fields in management and higher education show similar results.

“Over a working lifetime, this wage disparity costs the average American woman and her family $700,000 to $2 million in lost wages, impacting Social Security benefits and pensions,” the proclamation states. “Tuesday, April 2, 2019 symbolized the time in the new year in which the wages paid to American women catch up to the wages paid to men from the previous year.”

The Heart of Danville and Stith Funeral Home were both honored with awards by the Kentucky Main Street Program during... read more