Be vigilant in the fight against Boxwood blight 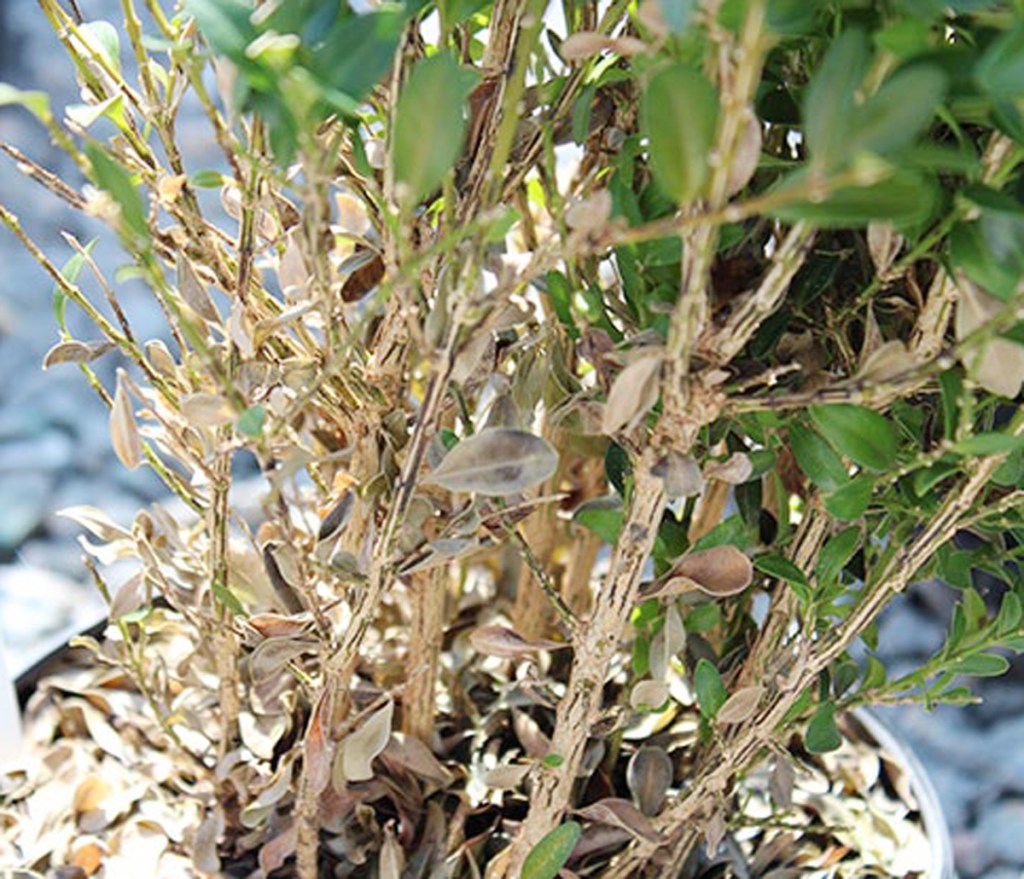 Defoliation of the lower portions of a boxwood plant is often the first noticeable symptom of boxwood blight. If you are worried about a boxwood or pachysandra plant in your garden, immediately take a sample of both living and dead material to the Cooperative Extension Service, 99 Corporate Drive, Danville, for analysis. Photo by Nicole Ward Gauthier, University of Kentucky.

Look out — it’s headed our way. The grim news is that sooner or later, boxwood blight could descend on Boyle County. This fungal disease has wiped out entire boxwood gardens and nurseries since it was first reported in Great Britain in the 1990s. It made its way to North Carolina in 2011 and soon showed up in Virginia and 25 other states. Alexis Amorese Sheffield, Boyle County extension agent for horticulture, warns that it was found in Lexington last year. It has most likely been transported through the nursery trade, or even ornamental boxwood wreaths shipped all over the country at Christmas time.

For hundreds of years, boxwood has been the backbone of southern gardens. Whether it’s big, billowing bushes by the front door, knot gardens, or clipped rows of smaller varieties edging garden beds, boxwood is a staple of gardens both public and private. If this threat isn’t frightening enough, the blight also hits that standby of ground covers, pachysandra.

The fungus thrives in warm humid weather like our recent summers. When conditions are unfavorable, it lies in wait under the soil for at least five years, waiting for warm days and rain. It thrives in temperatures between 64 and 81 degrees. That’s one reason to be thankful for really hot days. The good news, if you can call it that, is that the spores don’t spread far by air, because they are heavy and sticky. However, they cling to clothing, animals and garden tools, and can splash in water from one plant to another. The blight can only move long distances by the transport of infected plants, infested soil or contaminated equipment.

If this sounds like a horror story, it is. The fungus spreads so rapidly in a garden that if you see the dark spots on Friday, chances are every boxwood will be affected by the time the weekend is over. You may not even notice the small, dark brown spots on the leaves until you walk outside a few days later to find nothing but bare stems. The defoliation occurs from the bottom up, working its way in record time from stems near the soil to the crown of the plant. Elongated, dark brown or black streak-like lesions appear on infected stems. Sheffield explains that this damage is different from winter burn, which a lot of people are seeing right now. While boxwood blight can kill a planting within a week, winter burn won’t spread beyond the initial brown leaves.

But all is not lost. If your garden is unaffected, it has every chance of staying that way — with proper management. You can take heart from the news that the spores rarely move unaided by humans. The University of Kentucky Plant Pathology Department offers management practices that should keep your boxwoods and pachysandra healthy. First, don’t bring any new boxwood plants into your garden at this time, and that includes holiday wreaths or arrangements that include boxwood. If you must add boxwood, quarantine new plants far from existing plants for at least three weeks.

If you use a landscaping service, be sure they clean tools, equipment, even pants and shoes, before moving from one site that includes boxwood to another. Home gardeners should sanitize tools after working in the garden. Examine plantings regularly and immediately dig up any infected plants and dispose of them in plastic bags. Clear up all debris, then don’t replace the plant with another boxwood for at least five years.

Good air circulation is important, so prune bushes and overhanging trees to allow free flow of air and fast drying. Avoid overhead watering. (Tell that to Mother Nature these days.) Spread mulch beneath the bushes to prevent transmission of the spores by splashing rain or irrigation.

There has only been limited success using fungicides. They may protect against infection, but once it hits, fungicides will not cure boxwood blight. The most susceptible variety has also been one of the most popular for generations: Buxus sempervirens Suffruticosa, the English boxwood, revered for its use in topiary and parterres. Plant breeders have been developing cultivars that are blight tolerant, but no boxwoods are as yet completely resistant, according to UK plant pathologists.

If you are worried about dark spots or stem lesions on your boxwood, take a sample of both live and dead tissue from the infected area to the extension office for diagnosis. I am going to trust the good, conscientious gardeners of Danville to keep this plague out of our gardens. Be vigilant.