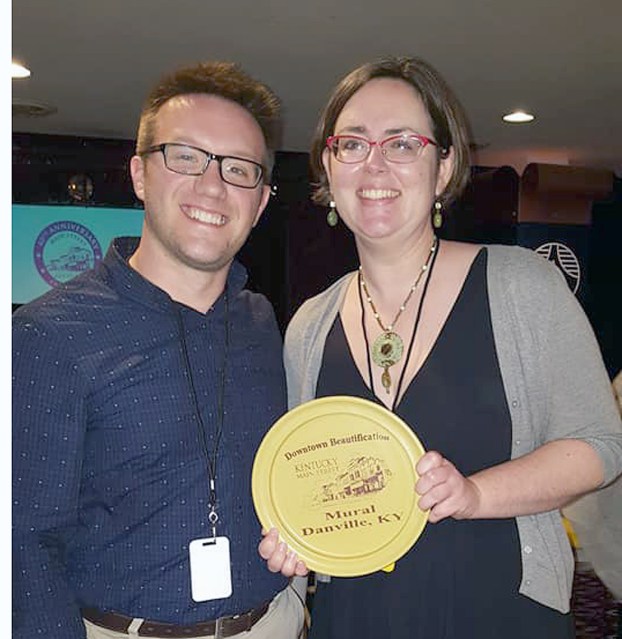 The Heart of Danville and Stith Funeral Home were both honored with awards by the Kentucky Main Street Program during its 40th anniversary conference in Covington earlier this week.

Stith Funeral Home, owned and operated by Mary and Robert Hamlin and their daughters AnnYager McCrosky and Sarah Kuchenbrod, received the Legacy Business Award for being in operation for 93 years as a family-owned establishment working in and contributing to the community.

The funeral home was started in 1926 by Jack A. Stith, who was Mary Hamlin’s grandfather. In 1938, the building where Stith Funeral Home is still located — 318 W. Broadway — was one of the first two buildings in Kentucky to be constructed specifically as a funeral home, Robert Hamlin said. And it’s the only one still being used as a funeral home.

He thinks the funeral home won the Legacy Award not only because of its long history of serving families in the community, but also because they are continually investing in the town.

The husband of their daughter and business partner, Alex McCrosky, has invested in downtown by opening up the popular restaurant Harvey’s. Another hefty investment that Robert Hamlin made several years ago was when he had the large tobacco warehouse on Harding Street rebuilt in order to help keep the tobacco industry in town, he said.

In addition to investing in projects, “We try to support all the charities and endeavors in the town,” Hamlin said.

The Heart of Danville Main Street Program was recognized with a Downtown Beautification Award for commissioning a large-scale mural in the historic district.

The contemporary and colorful mural, designed and facilitated by Andee Rudloff, caused some residents to have reservations about it being in the historic district, said Heart of Danville Board member and Community Arts Center Director of Marketing and Development Kate Snyder.

The process of getting permission for the mural and painting it in downtown was a good example of a grassroots effort to revitalize the historic area, Snyder said. It caused community members to attend public meetings, hearings and have discussions about its appropriateness in the historic area. And many others joined in painting the actual mural when it was approved, she said.

Having the project named as the best in the state “was extra meaningful,” Snyder said.

According to a news release, the awards were presented Tuesday evening at the Madison Theater in Covington. The conference was hosted by Renaissance Covington in partnership with KYMS, Friends of Kentucky Main Street, the City of Covington, BLDG Refuge, Hub+Weber Architects PLC, Pikeville Main Street Inc., Cincinnati Bell, and Kentucky Proud. Kentucky Main Street is administered by the Kentucky Heritage Council/State Historic Preservation Office (KHC).

Weekend event offers workshops for those affected by loved ones’ addiction

By ROBIN HART and BEN KLEPPINGER advocate@amnews.com An event to bring hope to individuals and families impacted by addiction is set... read more