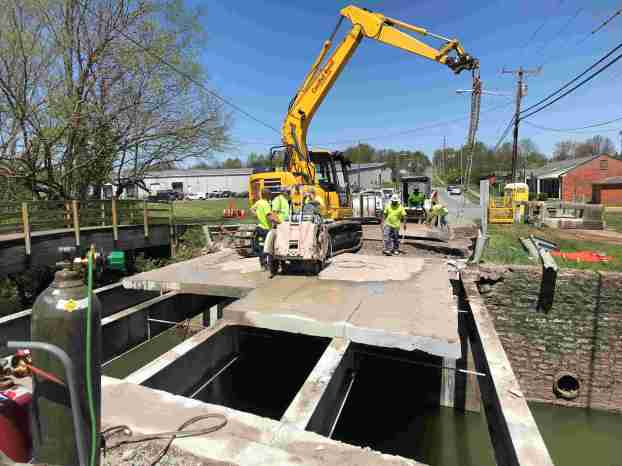 Jave Construction is making good progress on the Second Street Street bridge replacement near J.E. Woods Drive. The abutment supports for the new pedestrian bridge on the east side of the road are completed. 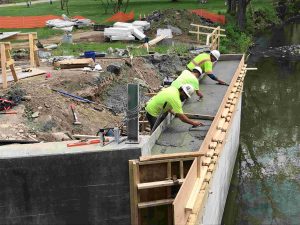 On Wednesday, the construction crew poured the new vehicular bridge abutment on the north side of the creek. They will be preparing to pour concrete for the south side in a week, and then the week following, the crew may be ready to start setting the beams on both the vehicular and pedestrian bridges.

The existing pedestrian bridge on the west side will remain open to the public during all of the construction.

Connecting sidewalks and landscaping will be added later by the City of Danville’s Public Works Department. While the vehicular bridge is unavailable, detours will be marked with signs and message boards.

Northbound traffic that usually uses Second Street will need to continue past the Second Street intersection traffic light and make their left or right turns once they are past the one way split starting with Fackler Street, but preferably Martin Luther King, Walnut and Main streets. Southbound Second Street traffic is encouraged to detour to Fourth Street. The closure should not last for more than two months.

City Engineer John Cassel said, “We appreciate your patience and with some cooperation from the weather, we hope to complete the improvements as soon as possible. Jave’s foreman

has enjoyed the comments by passersby that they are looking forward to using the new pedestrian bridge and the safety improvements. Hopefully motorists will appreciate the added safety and convenience as well.”