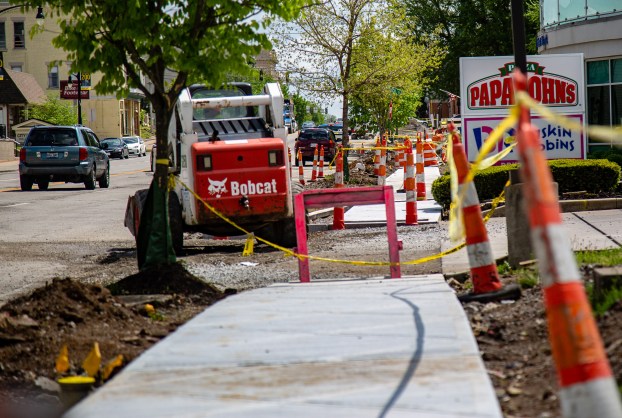 By BOBBIE CURD and BEN KLEPPINGER

The streetscape project currently underway on West Main Street has some people in downtown feeling inconvenienced, with the lane closure in front of Speedway gas station and sidewalks torn to pieces. But City Engineer John Cassel says he’s particularly impressed with what the contractor has been able to accomplish thus far, due to some issues popping up.

However, the original goal of having the work completed by Memorial Day weekend may be a lofty one, Cassel says. “But who knows; miracles do happen.”

The City of Danville contracted with Bluegrass Contracting to construct a new curb, sidewalks, street lighting and landscaping on the block of West Main between Fourth and Fifth streets. The work was started on March 5 by subcontractor Lawhorn Electric, which began demolition and removal of existing sidewalks.

The project was determined to take roughly 90 days or so, but experienced a hiccup when a gas line was detected just under the sidewalk during demolition, running in front of Community Trust Bank.

The original plan was to start at the Speedway corner on the south side of Main, proceeding east towards Fourth, then heading to the north side where crews would work their way west, towards Orange Leaf.

“They were going to do a section and then hit the next one, but they had to do a bigger section than they intended, which makes it look like they were under construction that entire time,” said Earl Coffey, municipal utility engineer. “But really, it was relocating that gas line more than the streetscape. It had to be done once they got into it, there was no way around it. Kind of got out of hand over there a little bit.”

That relocation cost the project about two weeks, Coffey said, “but other than that, we consider it to be an excellent project.”

Cassel said contractors did their bit in contacting utility companies, which came on site to mark their lines. Some lines may be metal and easy to trace, he says, but eventually companies began using plastic pipe, which is “great to use and safe, but harder to trace.” Usually, companies will mark them with a tracer wire or a metallic tape for detection purposes.

“But that depends on how well it’s inspected and managed,” Cassel said. He said the line in front of the bank “was literally just underneath the sidewalk and no tape on it to mark. The gas guys could check, do their scientific instruments all they want, but they wouldn’t have been able to find it.”

Danville attorney Ephraim Helton is one of the business owners whose property is being affected during the construction. He said he’s irked because of slow-downs in the project and because the drive to his business was closed for two weeks.

“They’re throwing pop bottles and burying it under the sidewalk,” he said. “That stuff will be there forever and I don’t think there’s any excuse for it.”

Coffey said this is the first he’s heard about this type of complaint.

Helton said he thinks the city should do a better job staying on top of the construction and ensuring a speedy completion.

“I just think the city engineer and the city manager should come over and supervise this a little bit,” he said.

Coffey said that is not the city’s role. It will “accept the work as either adequate or not adequate, acceptable or not acceptable, but we don’t supervise … We administer a contract, that’s what our role is.”

He said in actuality, that would be “a violation of the contract in most construction projects like that. Means and methods are up to the contractor … But John(Cassel) has been over there almost every day.”

Cassel said a specific end date for the project was never set, other than the “goal being Memorial Day.”

He said for projects like the streetscape or the Second Street bridge, there are no liquidated damages included on the contract, which can ensure the contractor gets the work done in time and assesses penalties if not.

“We’re being flexible with the contractor, in both cases,” Cassel said, noting both jobs started in March, with questionable weather. He said weather, the availability of materials and many other things can affect construction projects like these.

He plans to continue sending emails to downtown businesses to keep them updated on the streetscape’s progress.

“So I can’t say it’ll be done by Memorial Day — we don’t have a contractual requirement for that. The only reason I hesitate is there’s still some things that can pop up and get you. The gas line was totally unexpected,” Cassel said.

He said there’s “too much up in the air to set a definitive date,” but said the contract work has been impressive. “I’ve been doing this work since 1982, and these guys do a pretty good job, pursuing it the best they can. It’s proceeding pretty good,” Cassel said.

Although he refused to give an estimate of how far past Memorial Day he thought the project may run, saying it would be “irresponsible” for him to guess, Cassel said he’d heard some local griping about a past streetscape project people said they were told would take a few months, and ended up continuing for two years.

“That won’t happen here — it won’t be under my watch,” Cassel said.

Some addendums to the project were approved by the city commission recently, such as correcting a manhole in the turn lane going towards Fifth Street, which sits up too high from the pavement. Other additions include replacement of some stormwater inlets in the curb.

Coffey said Memorial Day weekend is still on target for a completion date.

“Substantially, everything should be tidied up by then, and they will have to go back through their punch list. They may still have a presence (after that), but the project — theoretically — should be substantially completed by that time,” he said. “Which is on schedule.”

There have been 58 ongoing or new economic development projects in Boyle County during the first three months of 2019,... read more