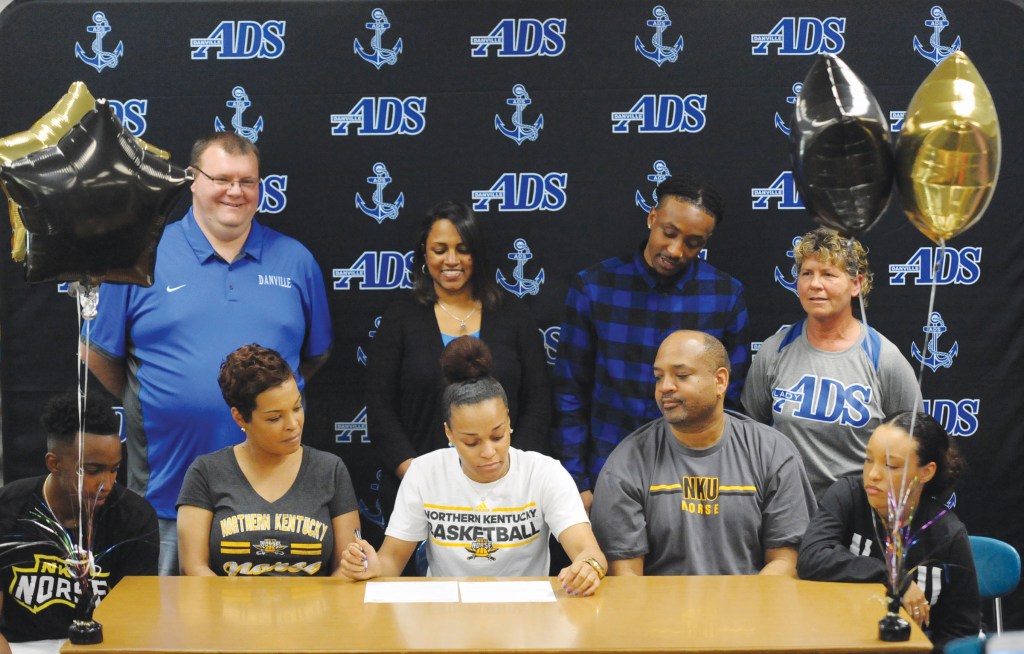 Turner put pen to paper on Tuesday at Danville High School, signing her scholarship offer to attend NKU this fall.

Turner — Danville’s all-time leading scorer, first team All-State and Advocate-Messenger All-Area player of the year — said that her visit to NKU made all the difference.

“I just went and it just felt like family there,” she said. “They all welcomed me there, everything is beautiful on campus, and the players welcomed me. I just really loved it when I went.”

Her sister, Ina, also loved it. She’ll have a role on the sidelines with the basketball team as well.

Danville head coach Judie Mason said that Turner’s transition to the next level will be a smooth one, simply because she knows how to play the game.

“Just like when Ivy went to the Kentucky/Ohio All-Star game, she was the MVP,” Mason said. “She steps on the floor and she knows how to lead. By the end of that game, they were running plays for Ivy that I ran at the high school level. She’s just so valuable, you don’t coach many players like her. I’ve coached 30 years now and I’ve not had many like her, I could count them on one hand. It was my choice to leave but I wish I would’ve had her three more years because I think she could’ve done even more special things.”

NKU came down to watch Turner on Feb. 12 — one of Danville’s seven losses of the season, a 99-97 thriller against Casey County. Turner scored 46 points in the game, and shortly after, she had an NKU offer.

“Northern Kentucky wanted her, they watched her play the Casey County game and she put on a show,” Mason said. “What can we say other than what we’ve already said? Ivy is Ivy. The day the coach saw her play, she told Ivy that they need a point guard like her. That has to make you feel good.”

Mason said that, no matter the system in college, Turner would succeed.

“I think you could drop Ivy off on an island and she’d be fine, especially if she’s got Ina with her,” Mason said. “Ina is going to go with her, be a part of the program and that shows the coach really wanted (Ivy). I’ll be honest, Ivy wouldn’t have gone if Ina wouldn’t. That’s just how they are. But I think Ivy will adjust to the college game the way she adjusted to me, it didn’t take her long at all. From the first day, she knew how I coached and knew what she had to do. No matter the program or the coach, she will be able to adjust.”

Fortunately for Turner, her year with Mason will prepare her for NKU.

“They want to run a full-court, fast-paced game and Ivy hasn’t really done that until this year,” Mason said. “She fell in love with it and got better every single game. I think that’s what their coach saw in Ivy, she’s going to get better every single game. Playing means a lot, Ivy has never sat on the bench. For her to go in, I truly think Ivy will work her way in to being the starting point guard.”

Turner has been starting or playing significant minutes at the varsity level for the past five years, but she said she’s willing to fight for a spot next year.

“I’ll just do my best, I leave in June so I’m going to do everything I can to get into the starting lineup,” she said. “I just want to work for that spot, and it might not happen because I’m a freshman. But if it happens, it happens. I’ll just go and put my all into it and fight for a spot.”

Mason said Turner closes a chapter of Danville girls basketball and starts a new one at the next level.

“I’m proud of her. I’m looking forward to watching her play and hopefully she put Danville back on the map,” Mason said. “In the next few years, we’re going to feed off of what she has done for us this year.”

Turner thanked her Danville community for its support through her high-school career.

“Danville has meant a lot, they all have built me into the person that I am today,” she said. “I probably wouldn’t be in this position without them, the community, the fans. I really just appreciate what they’ve done for me. My family, they’ve been a big part of my decision and everything I’ve done. I couldn’t thank them enough, I’m doing this all for them. Can’t thank them enough.”