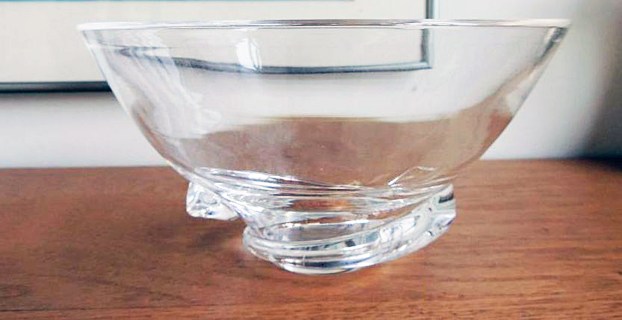 Steuben’s crystalline glass is not treated well in modern market

Question: Hi Jerry, my dad worked for Corning Glass just about all of his adult life. He and my mom are moving into a condo in Texas this fall. He had several bowls, paperweights and vases that are made by Steuben. We’re trying to get ready to help with downsizing. Are these pieces worth very much anymore? What should we do with them? Lastly, is it really good stuff to hang on to? Thanks for helping us with this.

Answer: You know, I’ve never had a question about Steuben crystal before and I love Steuben.

Steuben is America’s crystal house. Its proper name is the Steuben Glass Works. It was founded in 1903 by Frederick Carder and Thomas Hawkes. Both men were amazingly skilled glass artists and showmen. Steuben was based in Corning New York, in Steuben County, hence its name.

Mr. Hawks was the owner of Hawkes Cut Glass. At one time it was one of the largest and most important cut glass companies in the country, if not the world. Frederick Carder was an Englishman whose skills in experimental glass, colored wares and household items still make collectors swoon. He gained a mass of knowledge by working with and for Stevens & Williams in England.

In 1918, Steuben was acquired by Corning Glass Works where it became the Steuben Division. This division was purchased for an undisclosed sum by the Schottenstein Stores.

Schottenstein Stores are a behemoth in the retail industry, owning a whopping 51 percent of the retail market in many venues and disguises. Sadly, in 2011 they reported that they would be shutting down Steuben’s Corning factory and closing its Manhattan anchor store, thus ending an American icon whose history stretched back over 108 years.

In 2014, the Corning Museum of Glass reported it would be working with independent glass contractors to reproduce many of Steuben’s classic designs, using a new lead-free formula.

Is it good stuff? Steuben is amazingly crystalline clear. Its designs are classic, elegant and timeless. It’s graced the dining tables of the White House and the private homes of our U.S. presidents. It’s been featured in movies and TV shows, quietly, for decades. It’s been used by socialites and tycoons because of its fineness. Yes, it’s good stuff.

Take a piece and wash it in warm water with some white vinegar or a cap of ammonia. Dry it well and take it out into the bright sunlight. If that doesn’t convince you of its purity, nothing will.

However, the modern market hasn’t always been kind to glassware, including Steuben. The piece you showed me is titled “Spiral pattern bowl.” It dates to the 1930s when it was first designed. This piece retailed new, in the 1980s, for about $300. However, today it would sell for about $80 in a retail store, at best. Many of the massive presentation pieces that are used as trophies and high-end art works still fetch thousands of dollars at auction. Remember, they cost big bucks when new, too. Most of the smaller household pieces struggle, frankly.

As to what you should do with them, I’d use them. Put some candy in it, olives for a party or ornaments for a holiday season. Just use it. If you feel that it will be broken in short order or if it’s just not to your lifestyle, move it along to someone who will enjoy it. Thanks for a great question.

Editor’s note: Shirley Sheperson of Danville did the research for this article and Pat Williams of Forkland provided the photographs.... read more