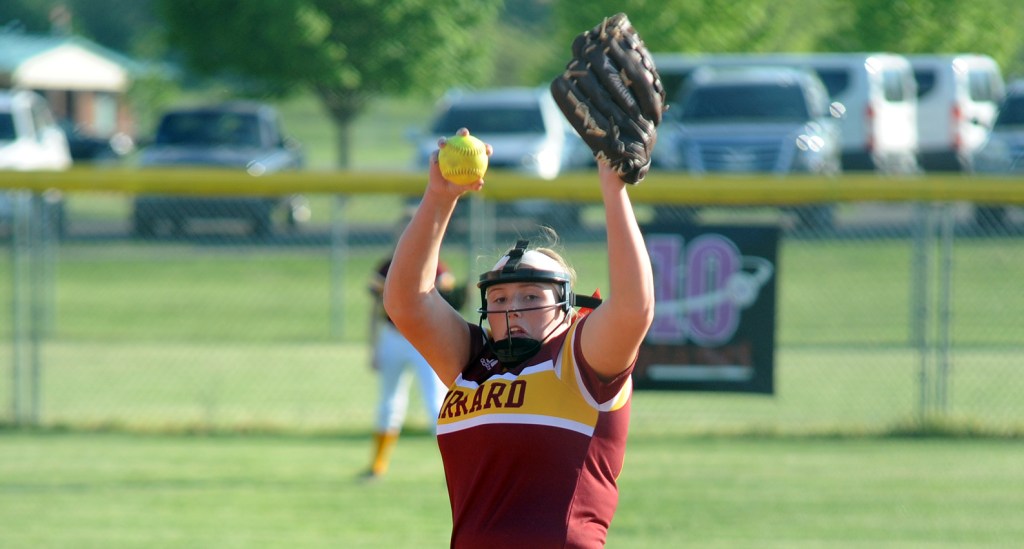 The first two innings were all Garrard County needed against Danville on Monday at Millennium Park.

By contrast, throw those first two innings out and Danville was admirable against a talented Garrard team.

The Golden Lions won 9-1 behind seven runs in the first two innings, and a dominant performance from ace Kelsey Perkins on the mound. Perkins pitched all seven innings, allowing just three hits while striking out 12.

“It’s a district win, that’s about all I can say,” Garrard head coach Todd Montgomery said. “We were a little dead, little flat today. I think we just lost it a little bit there late. It’s tough to get up for every game, but district games, you should be ready to go. And we just didn’t show up. But a win is a win, that’s the best I can say about it. Our effort, we’ve got to get that corrected. When you don’t have energy, it’s hard to turn that on and off and we never turned it on. We skated by.”

Danville head coach Tim Breitenbach was happy with the way his team performed after the first two innings, where the Admirals allowed four unearned runs to cross.

“It was 7-0 after two innings, we played them 2-1 the rest of the way. We just need to hit the ball more,” Breitenbach said. “Perkins is a great pitcher, one of the best. But we held their big hitters in check, and I told the girls: We fought. We could’ve ducked our head, but they fought back. Good things happen when you do that. I was pleased, we just need more hits and make more routine plays.”

Montgomery said he was happy with the way Perkins pitched, but knows she has another gear.

“She’s been averaging about 10 to 12 strikeouts per game, and she’d probably tell you she pitched well but not up to her standard,” the coach said. “We missed a couple of spots, didn’t spin it where we wanted to.

“Warmer weather she’ll pick up speed, spin. It’s coming. We didn’t show much off speed stuff. But we’ve just got to get our bats going, we’ve seen enough slow pitches now that I think we’re playing slow pitch instead of fast pitch.”

The Admirals limited Garrad’s offense in the final five innings, and it’s just the second time in the past six years that Danville has held Garrard to fewer than 10 runs.

Danville (2-16) will turn around to play Lincoln County on Tuesday — the Admirals lost to Lincoln 8-4 in Stanford two weeks ago — with an opportunity to improve on the final five innings during Monday’s performance.

“We played Lincoln a couple weeks ago and played with them, we gave up six unearned runs,” Breitenbach said. “If we make our routine plays, not try for the spectacular plays, we can be in the game. We’d like to beat Lincoln and play Garrard again in the district tournament.”

“I’m a little disappointed with how we showed up tonight but that’s a win. We’ve just come off prom, have a little senioritis but we’ll battle through it. We’ve got a tough game tomorrow night and we’ll see how they respond.