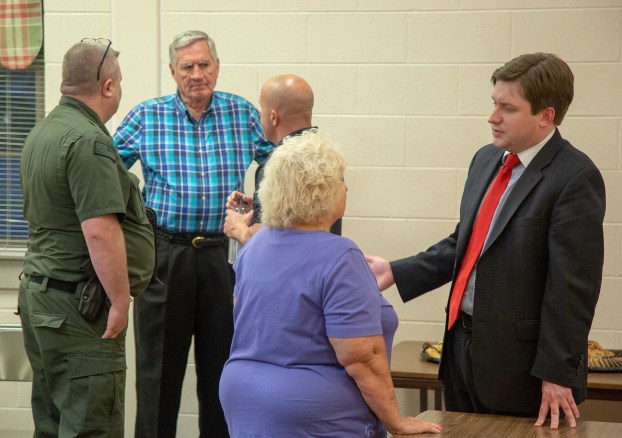 The Boyle County Fiscal Court is completely behind Jailer Brian Wofford in his efforts to change the outcomes of local incarceration, Magistrate Jason Cullen assured residents in his district during a “Pulse of the People” public forum last week.

“I think Brian can attest that this court is in his corner and we’re going to do whatever we can to make sure that his group has what they need,” Cullen said, referring to deputy jailers. “They are probably one of the lowest-paid groups in the surrounding counties, definitely for what they do and what they put up with.”

One resident who volunteers in the jail on a regular basis told Cullen and the other elected officials gathered for the event, including Wofford and Judge-Executive Howard Hunt, they should do as much as possible to improve the jail and local criminal justice system now, and not kick the can down the road. 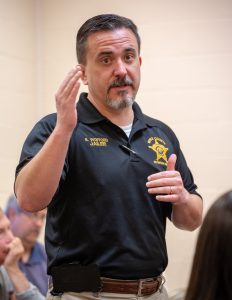 “We can’t make the whole situation nirvana overnight, but we can make the right positive steps in the right direction and give it the best shot of it being the detention center that we all want it to be,” Hunt said.

Multiple attendees were critical of the local court system and judges. They said the judges hold some responsibility for over-filling the jail, but they haven’t been at the table to find solutions.

Wofford took the opportunity to defend the court system a little.

“I will say this — the court system is doing much better than they were. Now it’s not perfect — I agree — it’s not perfect and it still needs to go a long way, but they are doing better,” he said.

Wofford said outside of the court system, he is working on programs and projects at the jail designed to “lower long-term costs” by reducing recidivism — helping inmates emerge from jail with the ability to get a job and stay on a good path so they don’t wind up back in jail.

“My philosophy is: Let’s make them a taxpayer, not a tax burden,” he said.

Cullen, who has lobbied for a bigger raise for jail staff than the 50 cents they’re expected to get this July, said Wofford is understaffed and with pay where it is right now, the local jail “becomes a training ground” for the state prison, Northpoint, in northern Boyle County.

An attendee brought the conversation back to the court system, warning officials not to “underestimate” the importance of that aspect when it comes to criminal justice reform.

Cullen said he understood the concern.

“We all in this court are beating our heads against a wall because we have a judiciary system that is not willing to help us get this problem under control,” Cullen said. “Luckily, we have a good county attorney that’s actually being very creative with keeping those numbers low. The biggest problem we have is our drug problem. That’s most of the people that are in there.”

Public awareness has grown of jail overcrowding and its financial costs to local government since the Boyle and Mercer fiscal courts funded an in-depth study of the Boyle County Detention Center and local criminal justice system. The study found the current jail facility sorely lacking in the level of services it could provide. And it alleged that several practices used by Circuit Court Judge Darren Peckler were slowing down case processing and causing over-incarceration of defendants.

According to reports from the Administrative Office of the Courts, Boyle and Mercer counties were the least likely in the state to offer defendants non-financial bonds for multiple years running, meaning defendants needed money to get out of jail more often here than anywhere else in Kentucky. The local study recommended more non-financial bonds because financial bonds can keep poor defendants in jail when they would otherwise be able to meet all the requirements for release.

In 2018, after the report came out and some of its proposals were implemented, the counties’ edged up from the bottom of the AOC’s list. Boyle County defendants were given non-financial bonds 14 percent of the time in 2018, tying the county for third-lowest in the state. In Mercer County, the number was 17 percent, making it eighth-lowest. By contrast, defendants booked into jail statewide could get out without paying money 40 percent of the time; and there were 20 counties where non-financial bond rates exceeded 50 percent.

At Thursday’s Pulse of the People, Hunt said he thinks media attention to the jail situation contributed to the changes that have been made.

“The local newspaper did some excellent coverage regarding the judicial concerns on sentencing and placement in the jail and really addressed a lot of things that needed to be addressed. Coincidentally or not, things have been noticeably improved since that ran in the paper,” Hunt said. “… Are we perfect, where we want to be? No. To be honest with you, the previous court and myself have tried to reach out to the judiciary to try to improve some things. All I’ll say is that we march to a different drum. I want to leave it at that and try to be as diplomatic as possible. But there have been improvements.”

Wofford confirmed the changes in the judicial system can be seen in the jail’s population. The jail has an official maximum capacity of 220, and its functional capacity is 176 beds, according to the local study.

Cullen said officials are continuing to work on ways to further improve the system. 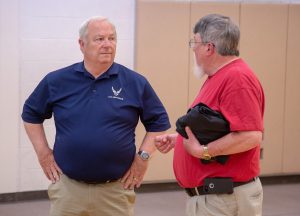 “We are trying everywhere we can to try to figure out a good solution to this,” he said. “We would love to have our judicial system come to the table and try and help figure things out. There needs to be corrections … at the state level, too, because we are kind of powerless in the county, and yet we have to foot the bill for these things.”

Hunt said in addition to the Shepherd’s House treatment program funded by Boyle and Mercer counties, there are dozens of groups and organizations working to reduce recidivism and “get those who want to be clean, clean.” They include Seeing Hearts Transitional Home, which hopes to open a sober-living home on Industrial Foundation land; and the upcoming arrival of a treatment program in Boyle County from Isaiah House, he said.

“All these things are pieces of the puzzle that help us help those who want to help themselves,” Hunt said. “It’s a small thing, but if we can reduce the intake to the detention center by giving people a life … give them something, a job — something they can build on in their future, give them some self-esteem — it’s going to be a positive for all of us.”

Later on in the forum, Cullen noted that Parks and Recreation offerings also play an important but often unnoticed role in reducing the jail population.

“People are kind of confused why Parks and Rec is such a big, hot topic right now,” he said. “Because we need to make sure that children have things to do in this community … one of the biggest problems I hear from my teenagers is that there’s nothing to do in this town. So they’re going to find things to do on their own … Making sure that we have a good, functioning Parks & Rec program is important, as well. We need to make sure we cover every angle and make sure that these kids have a good future.“

State Rep. Daniel Elliott (R-Danville) was one of the officials who participated in the forum. He said the Kentucky legislature did discuss bail reform during its recently completed general session. There was “vigorous debate” and the County Attorney’s Association and Commonwealth’s Attorneys Association were “very vocal,” he said. “It just shows you the power that a judge has in our system — and those judges are elected.”

Elliott said resistance to bail reform came from some judges who feared the reforms would take away their discretion.

“Until I actually delved into this problem, I never really paid much attention to when we vote for judges,” Cullen said. “I think it’s imperative that that’s one of the biggest pieces that we’re all educated on — making sure that when we vote for a judge … it’s someone we … vet.”

“When you’re picking your judiciary … consider their judicial philosophy on the sentencing,” Hunt said. “They won’t get specific about anything, but they’ll talk in generalities. Are they a judge that wants to hang ’em high? Or are they somebody (different) than that?”

Although Danville City Manager Ron Scott introduced the 2019-20 preliminary budget Thursday evening with the disclaimer that it “is not... read more