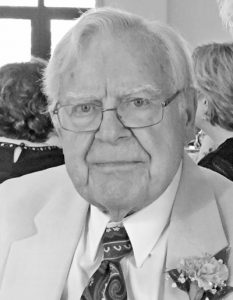 On Friday, April 26, 2019, George Francis White, loving and devoted husband and father of six children and ten grandchildren, passed peacefully at the age of 92. He was born in Perryville on January 4, 1927, to the late Lillie Mae Coyle White and Judge Gilbert Lee White. George was a graduate of Danville High School and the University of Kentucky. He was one of the oldest living original members of Lexington Avenue Baptist Church. He married his beloved wife, Peggy, 70 years ago on August 29, 1948. George served in the United States Navy during World War II and retired from The Williamson Company after 30 years as a sales engineer.

In addition to his parents, he is predeceased by a sister, Imogene Bottorff; and a brother-in-law Jeptha Jett.

Memorial donations are suggested to Lexington Ave. Baptist Church, Capital Campaign or the UK Sanders Brown Center on Aging. The online guestbook is available at www.stithcares.com.