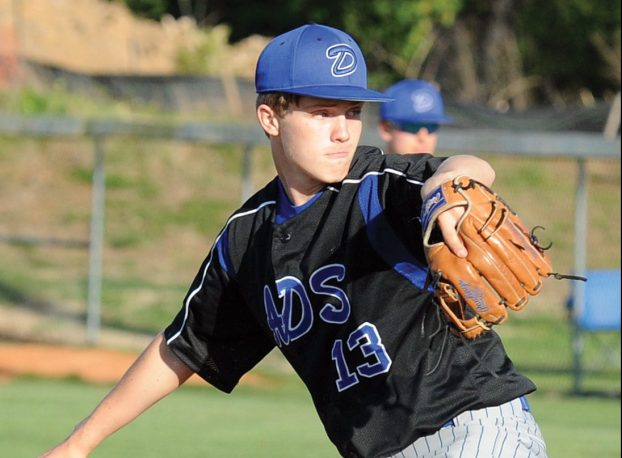 Brady Baxter was on point Wednesday night at Madison Southern.

Baxter tossed a complete game, striking out eight batters across seven innings of work as Danville won 2-0 on the road.

It’s the third straight road win for Danville and the sixth in a row.

In the seventh inning, Danville finally broke the scoreless tie.

Christian Howe walked to start the inning, then Brady Morse successfully bunted him to second base and reached first on an error, which allowed Howe to score. Morse advanced to third.

Bryson Young would then single to score Morse, and that’s all that Baxter needed to get the victory.

Baxter allowed just three hits and didn’t walk a batter in the win, his second of the season.

The Admirals improve to 25-3 on the season and will next host the Webster Orthodontics Invitational this weekend, starting Friday with a game against Mercer County at 5:30 p.m.

The Invitational will also honor former Danville baseball star Troy Trumbo: Danville athletics and the Danville educational foundation have teamed up to raise funds for a scholarship in Trumbo’s name. If you can’t attend the game, you can support the Trumbo scholarship by sending a check to the Danville Schools’ central office (152 East Martin Luther King Blvd, Danville, Kentucky, 40422), attention to Danville head baseball coach Paul Morse.

Marion County jumped out to a 3-0 lead in the first two innings against Boyle County on Wednesday, and the Rebels couldn’t bounce back.

Colin Carver settled in after the first two innings and didn’t allow a run the rest of the way, but the Rebels’ offense struggled against Marion starter Davis Rafferty, who pitched a complete game.

Eli Glasscock scored the only run of the game for Boyle in the fourth inning thanks to a double from Karson Thompson, who finished 1-for-3 with an RBI.

Thompson, Ethan Carter, Colin Carver and Corey Hildebrandt were the only players to record a hit for the Rebels.

Boyle (13-9) will host Southwestern on Thursday before a full day of baseball on Saturday at Boyle with LaRue County and Pulaski County coming to town.

Peyton Young struck out three batters and didn’t allow a baserunner in the victory.

It’s the third win of the season for Danville, who will play Burgin again on the road on Friday.

Next in line: Boyle girls hope to continue success at state level

Boyle County girls track and field has been at the top of the state for the past three years. This... read more