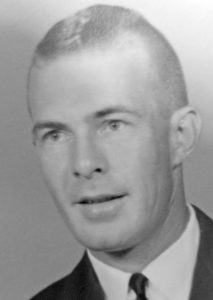 Clay Parks Moore died on April 25, 2019. Born in Danville on April 24, 1931, to the late Frank Irvine and Anna Parks Moore. He graduated from Danville High School in 1949 while participating in basketball and track. He graduated from Eastern Kentucky University (EKU) in 1954 with a B.A. degree in Business Administration. He lettered in track all four years of his collegiate career and in 1953 won first place in high jump at the Ohio Valley Conference Championship. In May 1953, he was commissioned a Second Lieutenant in the Field Artillery through the ROTC program at EKU. He entered active duty February 1954 and remained on active duty as an Army officer until retirement in March of 1983. During his thirty years of active duty, he attained the rank of Lieutenant Colonel while commanding all calibers of field artillery units at Battery, Battalion and Group levels. He served in Japan, Korea, Iwo Jima, Okinawa, Vietnam, Germany and numerous stateside installations. His final assignment was Commanding Officer of the Bluegrass Army Depot in Richmond, Kentucky. He received numerous awards during his service; the most notable being four bronze stars with Valor, three Purple Heart Medals, five Air Medals, two Meritorious Service Medals, two Army Commendation Medals for Valor, Unit Citation and Combat Infantry Badge. Upon retirement from the military he pursued his love of horses by operating Shaker Turnpike Stables for nineteen years. During that career he showed Hunter and Jumper horses throughout the Midwest and South, fox hunted with four recognized Fox Hunt Clubs in the Midwest and rode as an official “outrider” in eleven Rolex Three Day Events at the Kentucky Horse Park. Additionally, he served as a “Recognized Steward” for twelve years for the American Horse Show Association officiating at over 100 recognized shows for Hunter and Jumper events throughout the Midwest and South.

He was also predeceased by his sister, Ann Irvine Brown; and his wife, Sherry K. Moore.

Memorial donations are suggested to the Danville-Boyle County Humane Society.