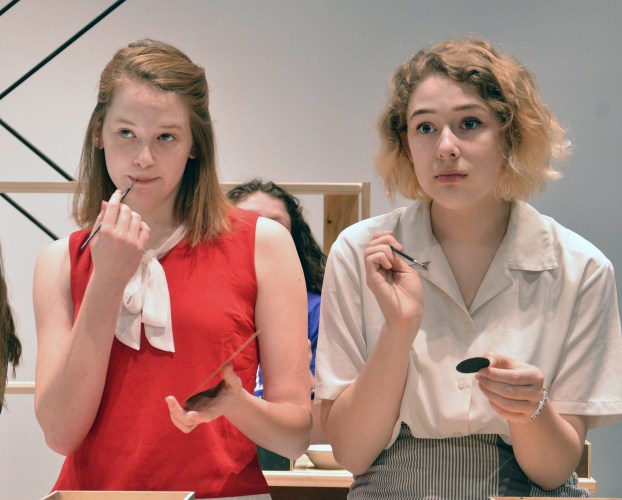 Emma Merriman, left, and Natalie Grubbs portray Catherine and Charlotte in the play “These Shining Lives.” Photo by Robin Hart

Danville High School’s spring theater production “These Shining Lives” is based on a historic event set in the 1920s in Illinois.

Tom, played by Joseth Warner, reacts to his wife Charlotte, played by Emma Merriman, when she tells him she is going to work full-time in the clock factory.
Photo by Robin Hart

“This is the first show I’ve directed in a while that I felt honored, almost, to be able to direct it because it’s just a beautiful, beautiful story,” said director Beth Marlowe.

The script is based on the true story of several women who are referred to as The Radium Girls.

“Spoiler alert! Radium is dangerous for us all,” Marlowe said, during a recent show rehearsal.

The Radium Dial Company was a factory that operated in Ottawa, Illinois. It hired women to hand-paint luminous clock and watch dials with a mixture of phosphorus and radium, Marlowe explained. It allowed the watch faces to be seen at night because they glowed.

“Women were hired for the first time, outside of the home. They’d sometimes get part-time jobs, but they weren’t career women.” It was a very exciting and liberating time for these young women, Marlow said.

“It’s a great story of friendship. These women, together for the first time in their lives, are experiencing freedoms they’d never had before. They could work and earn money on their own, be independent and have their own say in things.”

But it didn’t last for long.

The process “lip, dip, paint” was how the women were taught to paint the dials. During the play, as conversations flow from one scene to another, several cast members remain at their desks and continuously dab a small paintbrush in their mouths to make a fine point, dip it in the radium paint, then paint the dials.

“The radium was going right into them. They all thought it was safe. … In a couple of the scenes, the company doctor told them radium was actually good for them and that it cured just about everything.” As the women began getting sick, the doctor said just to take an aspirin, Marlowe said. 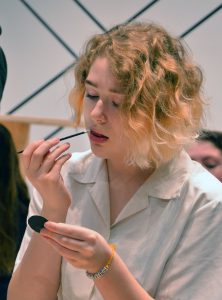 Natalie Grubbs shows the right way to get a fine point on her paintbrush before dipping it in a radium infused paint.
Photo by Robin Hart

When a group of friends became sicker, they decided to confront the company because management did know about the dangers of radium. “So they sought out a lawyer. In the ‘20s, for a woman to do that was just unheard of,” Marlowe said.

The play “is all in little mini scenes. There are no walls or set changes. It all flows together,” is how Marlowe described the stage. For example, the main character, Catherine, played by senior Emma Merryman, will be talking with her co-workers in the factory, then take a few steps away to a scene in her home or doctor’s office. “It’s very fluid,” Marlowe said. There’s not even an intermission, she added.

“I’m so thankful that Emma’s in that role. It would be quite an undertaking for anybody,” Marlowe said. “Emma never leaves the stage, not one time. The fact that she’s taking this on as an 18-year-old girl. … It’s a tough role. Literally memorizing the lines is hard enough. But then finding the truth and emotion and really having to delve in — that’s tricky,” Marlowe said.

The cast of “These Shining Lives” is pretty well-seasoned, Marlowe said. Senior Natalie Grubbs, who plays Charlotte, is “just remarkable. … Her comedic timing is impeccable.”

Even though it is a “heavy story,” Marlowe said there is a lot of humor. “You won’t go away feeling depressed and dark. It’s uplifting.”

One of the challenges for the high-school students in this play is that in the 1920s and ‘30s, the dynamics between men and women and their attitudes toward each other were extremely different than they are today. “We’ve had to go back and do a little educating of ourselves of really how things were back then and how different things were,” Marlowe said.

Joseth Warner, who plays Tom, Catherine’s husband, was delivering his lines as a modern-day man from 2019, Marlowe said. So she explained to him that a husband would have been very insulted if his wife could earn more money than him at the time of the play. It would have even been a struggle for him to allow his wife to go to work in the first place, Marlowe said. 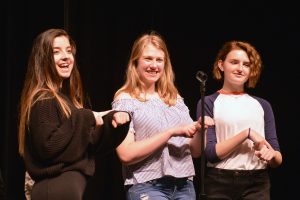 A neat element about this show, Marlowe said, is cast member Jenna Haines, who plays a radio girl, knew about The Radium Girls because her family is from Ottawa. She had an aunt who played on the playground where the Radium Dial factory had been demolished, and she died of cancer.

“I got obsessed with their story after reading this play,” Marlowe said. “It’s just one of those things that stick with you.”

Marlowe said through research, she found photographs of the women whose characters are featured in this play — Catherine and Charlotte, played by Merryman and Grubbs; Frances, played by Lina Morales; and Pearl, played by Libby Hale.

“I was sending the girls pictures of their characters. I was saying, ‘this really happened to them. This isn’t a play that you’re used to doing where you are a fictional character. This is really truth.’ … I wanted them to know what they looked like and who they were.”

She felt it was important for the audience to know as well. So with the help of student Sophie Farmer and Melissa Haines, Jenna’s mom, they created a powerpoint with photos and newspaper stories to be shown on a large screen on stage as the play is being performed. 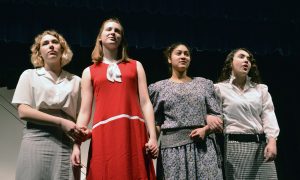 From left, Natalie Grubbs, Emma Merriman, Libby Hale, and Lina Morales look over the lake and reflect on life and their friendship.
Photo by Robin Hart

Marlowe said she’s worked with many of the cast members for several years on other projects, and with this show, she wants them to know “What theater should really be about — to educate, to inform people. That’s what takes this to another level.”

Funding the Boyle County Sheriff’s Office and Boyle County EMS would cost the county’s general fund a total of around... read more