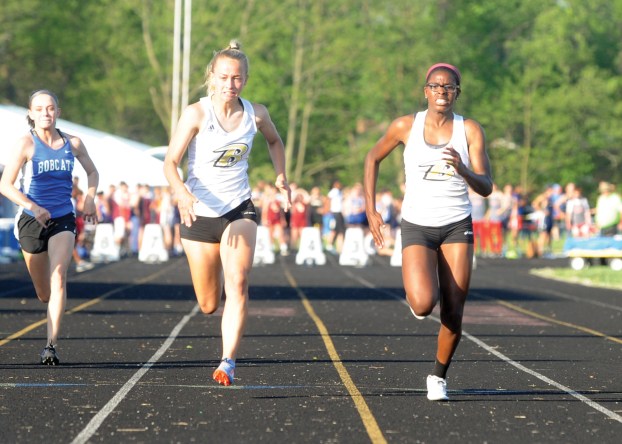 Next in line: Boyle girls hope to continue success at state level

Boyle County girls track and field has been at the top of the state for the past three years.

This year, the team’s success will rely on four upperclassmen who have played key roles in each of those three state championships from 2016-18.

Daneezia Patton, Chelsea Elmore, Kaylee Lanigan and Ashley Smith have all won state championships in the past two seasons. Patton, now a junior, was also a part of the 2016 Boyle County team that started the Rebels’ dominance as an eighth grader.

The talented quartet are similar, but different: Patton and Elmore shine in sprints. Lanigan is an expert in hurdles — and helps the sprint relays — and Smith stars in two field events, pole vault and discus.

It didn’t really sink in that they were the leaders of Boyle’s track team until the season was underway, head coach Brent Wagner said.

“I think it was a bit of a shock at the beginning, I don’t think they thought of themselves as the leaders on the track yet,” Wagner said. “Because they looked around, they didn’t have an Emmie (Harris), a (Kylie Thompson), a Becca Tarter, Chelsea Moore, those types of athletes. You didn’t have them. They didn’t see them, we told them one week and said, ‘look ladies, those kids you used to look up to? That’s you.’ Everybody knows who they are, they know what you’ve done.”

Patton and Lanigan are juniors, while Elmore and Smith are seniors.

“It doesn’t feel like it but I know (my teammates) look up to me, I just try to help them and push them, be that person that they can look up to,” Lanigan said. “When they look stressed out or worried about something, I want to talk to them and help them get through it.”

Smith said that their past successes have helped drive younger athletes to the track this year.

“It brings a very good energy to the team,” Smith said. “This year we’ve got a lot more people who came out because they saw that energy, they saw what it’s like to be on this team and they wanted to be a part of that. Who doesn’t want to be a state champion?”

Smith has participated at state in each of the past two years. As a sophomore, she placed 10th in pole vault. She placed fifth last year, clearing nine feet.

She also surprised herself and placed fourth in discus.

“I was really surprised, I came in there unranked in pole vault and discus,” she said. “I knew I didn’t have anything to lose, so I just went in there and had fun, did my best. I think that started the energy to what’s coming this year: It got me more excited, I fell more in love with track because of what happened at state.”

This year, she’s leading the region with an 11-foot mark in pole vault and is among the state leaders in discus.

“I decided that I wanted to work and better myself from last year at state,” Smith said. “I PR’d with nine feet last year, came out this year knowing that I wanted to do better for my team because I know we’re chasing a fourth state championship. I PR’d by two feet and now I’m jumping 11.”

Wagner said it has been pure dedication from Smith to improve herself. She’ll join the Eastern Kentucky University track and field team next year and will compete in disc and pole vault at the college level.

“A lot of dedication after last year’s state championship,” Wagner said. “She was going to an indoor facility routinely, she has a passion for it. She’s going to Eastern to throw and pole vault. That’s just hard work and dedication, driving to and from. She went to pole vault camps over the summer. That dedication is crazy but for pole vault, you have to have that. It’s different every single meet. She has done great.”

But as a sophomore, she had a surgery setback and struggled throughout the season.

“We watched film from last year and I don’t think she realized or anyone realized how bad she was hurting last year, trying to come back and do different things,” Wagner said. “It just shows how tough that kid is, she’s spectacular for us.”

“From last year, since I had my surgery, I feel like I’ve made a great comeback and I’ve been able to work on myself in practices to help me achieve what I’ve been doing so far,” Patton said.

“For me, I want to stay healthy. My legs feel good and I think I have a good mentality, my body feels good.”

The core four have helped Boyle see success this season, but for that success to continue, they’ll need help from the underclassmen. Payton Bugg, Emma Jackson, Annabelle Tarter, Naia Hutchins, Kennedy Kirkland and Hennessey Ison are all freshmen or younger and were key in the Rebels’ invitational win on Friday.

“We’ve had some younger ones this year come in and take a part in some really big roles that we were missing from people who graduated last year,” Elmore said.

They’ve had success in the past, and it’s success that they want to continue.

“We’ve got goals, they’ve got individual goals and we have team goals,” Wagner said. “When you have success like that you want to stay on top. It’s coming, but at the end of the day, we’re a month away. That’s some good time for a lot of good things to happen for us.”

Lanigan said that the team’s relationships outside of the track make it meaningful as well.

“Our team, just the relationships that everyone has with each other,” she said. “It really feels like a family, the girls I run with, I’ll hang out with them after school. I can go to talk with them about anything.”

The first two innings were all Garrard County needed against Danville on Monday at Millennium Park. By contrast, throw those... read more