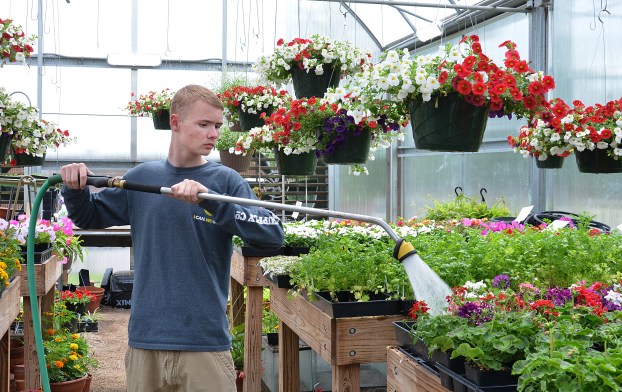 Jesse Rice, a sophomore at KSD, said he enjoys watering and transplanting the flowers in the newly opened greenhouse on KSD campus. The greenhouse is now open for business through May 22. Photo by Robin Hart.

The Kentucky School for the Deaf greenhouse is now bursting with color and open for business after three years of being dark and empty.

KSD agriculture teacher and FFA advisor Sandy Smock said for the past three years, the greenhouse was closed so ag students didn’t have a place to learn how to produce bedding plants and offer them for sale.

Jenna Pratt, a senior at KSD, is majoring in animal science and this has been her first experience growing plants since the greenhouse is reopened. Photo by Robin Hart.

But now, following a complete upgrade and the students’ hard work using “trays, soil, seed and plant science methods, they now have a commercial-grade greenhouse open for the community to come and visit,” Smock said.

Simple wooden tables are loaded with trays of popular flowers including impatiens, calibrachoa, begonias, snap dragons, marigolds, geraniums, vinca and coleus, just to name a few, Smock said. Everything in a three-part tray is $2, Smock said. Dozens of hanging baskets filled with red, gold, purple, white and lavender flowers swayed in the breeze as fans circulated fresh air through the building. They’re $12 each, she said.

Out on the terrace, racks are stacked with tender young vegetable and herb plants — tomatoes, peppers, squash, watermelon, dill, rosemary, sage and thyme — all ready for transplanting into gardens.

“We are proud to open our doors to the community,” Smock said. “We welcome all members of Danville and Boyle County.”

Hours for the KSD greenhouse sale are 8 a.m. to 4 p.m. Monday through Thursday; 8 a.m. to noon on Fridays and 9 a.m. to 5 p.m. on Saturdays through May 22. The greenhouse is tucked behind the Argo McClure Building on Second Street on KSD campus, right across the street from Jacobs Hall Museum.

Gerod Haynes, a senior, gets his hands dirty as he transplants tiny sage seedlings. Photo by Robin Hart.

Jenna Pratt, of Danville, is a senior at KSD majoring in animal science. This has been her first experience growing plants, she said using ASL with Smock translating.

“I feel like it’s kind of a therapy,” Pratt said. Her favorite flowers to raise has been “the waves,” referring to wave petunias, she said.

Jesse Rice, of Hanson, is a junior and is working on a double major — animal science and plant science. He said he’s worked with his grandmother helping her plant many different kinds of flowers around her home in past years. 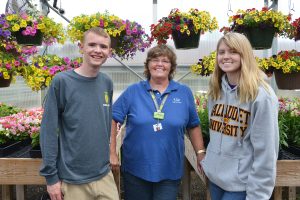 He said he loves working in the greenhouse, especially the chores of watering and transplanting.

Smock said the greenhouse was stripped down to a skeleton and polycarbonate side panels were added. The heating element was converted from steam to natural gas and a brand new gas furnace was installed. A new dual-layer polyethylene roof was added that has a R13 rating and new intake vents and exhaust fans were installed.

The building had been lit by two incandescent bulbs, Smock said, but now there is LED adjustable lighting along all the walls.

“The greatest thing is the new three-part communications system,” Smock said. The greenhouse is now wired with the rest of the campus and includes fire and weather alarms, and an intruder alert system.

“This is really quite an upgrade for us,” Smock said.

Hogsett’s principal is retiring. His replacement could be chosen next week.

Hogsett Primary Principal Leo Labrillazo is retiring at the end of this school year, after 29 years in education. “As... read more