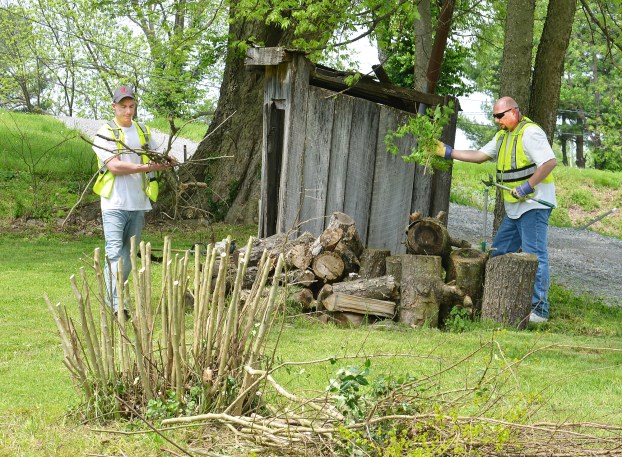 New program allows inmates to ‘give back’ to the community

Jailer Brian Wofford said the new opportunity, called the Inmate Community Service Program, is just one part of a total re-entry into society program he wants to provide for inmates at the jail. 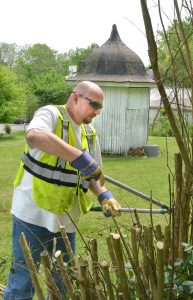 When attending fiscal court and Pulse of the People meetings, Wofford said he often heard about the county’s needs, including roadside trash clean-up, and nonprofits that need help with manpower for some of their projects.

The Inmate Community Service Program is “basically a way for inmates to give back to the county,” he said. “It also saves the county money,” by not having to pay someone else to do the labor needed.

The inmates will benefit from the program because the hours they work will be documented and added to their records as time served, thereby shortening their incarceration, Wofford said.

“This is a way for them to give back to the community,” said Deputy Jailer Fred Edwards, who was escorting two inmates as they worked on Tuesday. Edwards is also the special projects coordinator for the new program.

The jail’s community service opportunities for inmates can be requested by county magistrates for their districts, Edwards said. The mayors of Danville, Junction City and Perryville, along with non-profit organizations, can also request their help.

Whenever county magistrates and city officials have projects they’re concerned about, “We’d be glad to come out and help them,” Edwards said. There are about 40 state inmates eligible to work in the new program, he said.

Tuesday was the first day of the program and two inmates participated — Tony McCormick of Louisville and Dillon Davidson from Western Kentucky picked up trash along a portion of Forkland Road at the request of a county magistrate, Edwards said.

Then, Edwards and the two men traveled to Perryville.

As he watched McCormick and Davidson trim overgrown brush behind the Johnson-Britton House for Main Street Perryville, Edwards said, “Labor like this is hard to find.”

Dillon Davidson, a state inmate at the Boyle County Dentention Center from Western Kentucky, trims weeds on the first day of the jail’s community service projects being carried out by inmates.

They will also help Main Street Perryville pack historical items at Green’s Drug Store on Merchant’s Row and move them to the Johnson-Britton House, where a museum is being created, Edwards said.

He described the BCDC inmates who will be working on community service projects as Class D, level 1 offenders. They haven’t been in trouble with the law previously and they are nearing their release dates, Edwards said.

Having these inmates work on projects throughout the community will hopefully change the public’s perception of who these people are, Wofford said. “These inmates aren’t like a Charles Manson.” They’ve made mistakes, but they aren’t violent offenders, Wofford said. They’re low level and low risk inmates.

The Kentucky School for the Deaf greenhouse is now bursting with color and open for business after three years of... read more