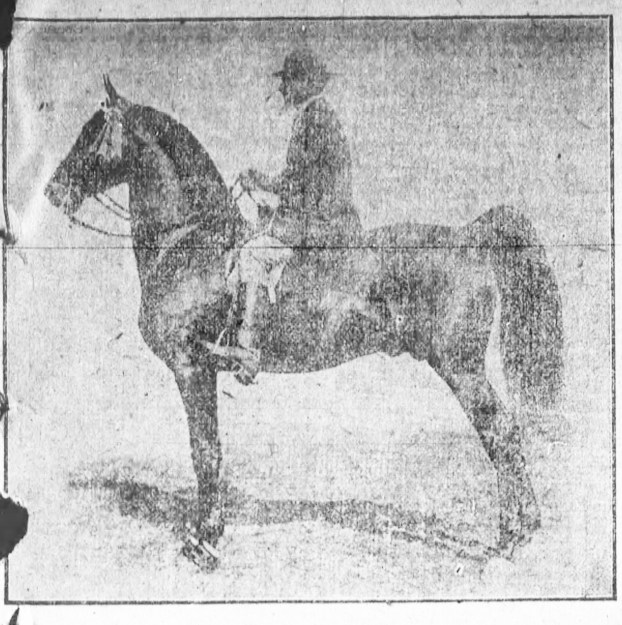 Boyle County once recognized as a mecca for fine horses

Boyle County was once considered one of the leading counties, in “respect to the production of fine horses in the far-famed Blue Grass section of Kentucky, and recognized throughout the world as the mecca for fine horses,” according to a 1916 article in the Kentucky Advocate.

The success of the horses on the race courses from the stable of the late J.G.Cecil, gave this country a coveted pre-eminence in the harness racing world.

Joe McDowell Jr., a prominent farmer who operated the 240-acre Bellevue Farm on Perryville Road, where he had his band of saddle horses, was among others in Boyle County who had success in the saddlebred competition.

His saddle stallion Kentucky’s Choice won at the Kentucky State Fair for the fifth consecutive time in 1916. 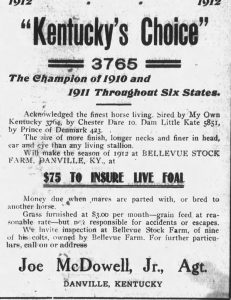 An advertisement about the famous horse Kentucky Choice ran in the Kentucky Advocate April 1, 1912. Image contributed

Col. I.M. Dunn had the distinction of having bred a former champion, Gypsy Queen.

At the close of the 1916 season, many horsemen said Gypsy Queen’s claim was to have been the best 2-year-old horse of all time. George Robinson, William Rue, Will Caldwell, “Tip” Bruce, George Anderson and the Faulconer brothers also were equally high standing in the show rings of Kentucky’s best fairs.

Two great pacers, Homer and Branham Baughman, owned by John S. Baughman, and others belonging to Col. Jake Hugely, C.P. Cecil Jr. and F.T. Logan, kept Danville on the map in the world of harness racing, as had the thoroughbreds of Dave Prewitt, A.E. Hundley & Son, and the Worthington brothers kept Boyle County in the limelight on the turf.

However, Boyle County had not a single trotting horse trainer in 1916, while Mack Hughes was the sole survivor of the “Knights of the Saddle” and Kentucky’s Choice was the county’s only nationally known horse.

“Perhaps no one has done more to bring about the ‘Renaissance’ of the saddle horse industry than Joe McDowell.’’

The greatest horses owned by McDowell were Kentucky’s Choice, and Chester Chief.

McDowell paid $8,000 for Kentucky’s Choice, who had triumphed at practically all of the leading horse shows from coast to coast, and in a single season won the championship titles of seven states — St. Louis Fair, Chicago International and shows in Kentucky, Missouri, Illinois, Indiana, Ohio, Tennessee and West Virginia.

When Kentucky’s Choice was retired from the show ring, he had defeated every great horse on the show circuit and made a show record. After retirement from active showing he was still shown in breeding classes at the state fair and horse show.

It was through Kentucky’s Choice’s 2-year-old chestnut son, Highland Choice, that he acquired his greatest fame.

Highland Choice was bred and sold by Mrs. Lowndes to McCray Brothers of North Middletown, who exhibited him.

As a yearling, he triumphed over the best yearlings at the state fair and finished the season with an untarnished record. He defeated every 2-year-old stallion, mare and gelding against which he was pitted at nine of the principal fairs of Kentucky, reaching his zenith when he won the 2-year-old saddle state at the state fair. He also vanquished both the 2-and 3-year-olds when he won the junior championship at the Bluegrass Fair.

Kentucky’s Choice was the sire of 10 colts that were sold for an average of $1,582 each, according to an advertisement in June 1917.

The horse had never been defeated in a breeding class or when shown with his colts or at the head of the herd at the state fair.

Four of the colts won 67 first place ties through the circuit in 1916.

Kentucky’s Choice and his sire, My Own Kentucky, won the class for the finest stallion, mare or gelding, defeating 40 horses at the Knoxville exposition in 1914. This was on the same day as the Kentucky State Fair when they defeated 34 horses.

From our Files, May 4

100 YEARS AGO — 1919 Large crowds of people are taking part in the Victory Loan parade today, following the... read more