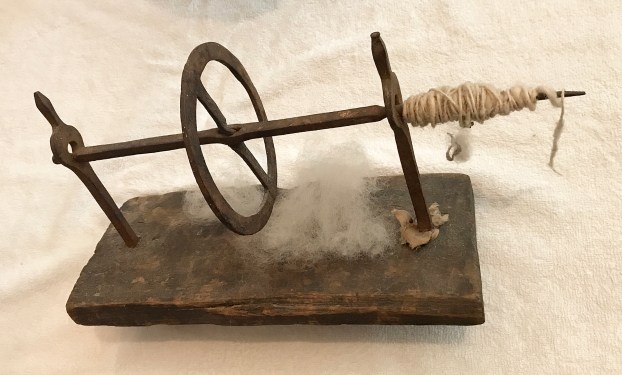 Question: We found our lap spinning wheel 30 years ago in an east Tennessee barn. It was an antique shop full of early pioneer era primitives. The story told was that in the earliest settlement years, a woman becoming elderly would often want to continue making items for the family, no matter how small. This lap spinning wheel provided an opportunity to sit by the fire and spin raw wool into yarn.

Likely, a local blacksmith made every piece including the rived board. It is remarkable how much care went into the wrought iron support: note the artistically topped finials.

At the base of the front support, you will see a piece of fabric. Apparently, that finial was loosened as the board seasoned out. A repair was made by wedging a small piece of homespun: (linsey-woolsey) in between finial and rived board, tightening the support.

It is very touching how a family with a failing, perhaps disabled “granny” found a way to keep her an active contributor to their primitive lives. That’s certainly a lesson for all of us today.

Answer: First off, what an incredible and early piece this is. I really had to stretch on this one. I reached out to textile experts, spinners, weavers, frontier collectors, historians and just people who enjoy different things.

I like the sounds of your scene with an elderly grandmother, she was likely 35 years old, spinning away, in an attempt to create something useful for her family, in her aging years.

Unfortunately, I don’t think that’s entirely right. I think what you have is called a Mother Marian or a little Meggie. This is the general thought of many that I researched with. You’re close, but no cigar.

This would be a foot powered spinning wheel. As one historic interpreter who focused on historic textiles put it, “You could use it on a table and that would work, but that’s like using a fork to pitch hay with. It takes two hands to spin well.” Mother Marian’s are still bought and sold today, but they are a far cry from this forge-made piece.

That’s the one thing that everyone was just in awe over. Its early age and its forge crafted wrought iron is just tremendous. One man I showed the photos to thought that it could easily be 18th century. It’s likely from Virginia, North or South Carolina and could have been a treasured possession brought from England. Because of their hard use, they simply didn’t survive too long. Sometimes, when more money was available, they were relegated to the background, in favor of new and better technology.

Value is a tough one. It’s going to be something that is going to appeal to a scholar. That may be a scholar of textiles or someone enamored with early, handmade, artifacts. It’s not overly lovely, but it sings with history and experience. I’d wager it would be priced for about $400 at an antiques show that caters to collectors who look for early pieces. It’s a great piece and thank you for sharing it with us.

Boling was an early educator in Boyle County