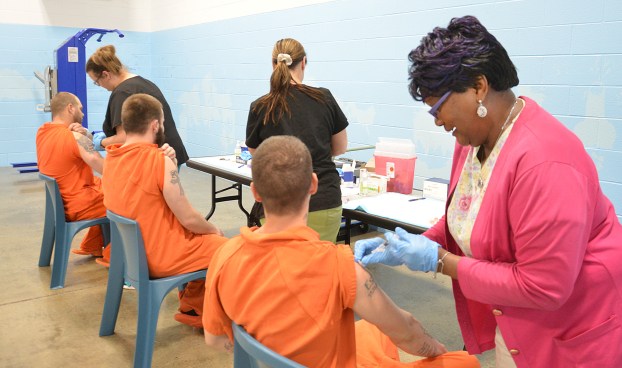 Loyce Pullins, an LPN with the Kentucky Department of Public Health, gives a hep A injection to a Boyle County Detention Center inmate, as other inmates roll up their sleeves for their shots. Photo by Robin Hart.

State health department gives jail a ‘shot in the arm’

The Kentucky Department of Public Health gave the Boyle County Detention Center’s budget “a shot in the arm” on Friday.

Boyle County Jailer Brian Wofford said the state health department out of Frankfort gave hepatitis A vaccinations to about 130 inmates, free of charge. 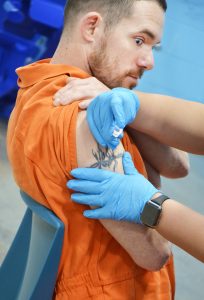 Even though the health department recommends having a second round of Hep A vaccination six months after the first injection, the initial vaccination is more than 95 percent effective, Wofford said.

Hepatitis A is a viral disease that inflames the liver. It’s usually transmitted when someone with the disease has poor hygiene and fails to wash their hands after using the bathroom, then touches other people, for example by shaking hands.

Most commonly, the outbreaks are attributed locally to drug use being on the rise, Boyle County Health Department Executive Director Brent Blevins has said previously. The disease is spread fecally and orally. But really, there can be a number of factors affecting the spread, according to Blevins.

Throughout the morning, deputy jailers escorted inmates from each individual cell into the recreation room, where tables and chairs were set up for nurses to administer vaccinations to three men at a time.

As Blevins wrote down each inmate’s information as they walked in to receive a shot, he said whenever the state department receives grants to administer programs such as Friday’s hep A vaccinations, “They are really good to us. They know it helps out at the local level.” Not only did the state department of public health send the vaccines, it also provided the nursing staff to fill out the paperwork and give the injections.

When asked why the state department offers these free services to the jail, Wofford said, “It’s out of the goodness of their heart, I guess.”