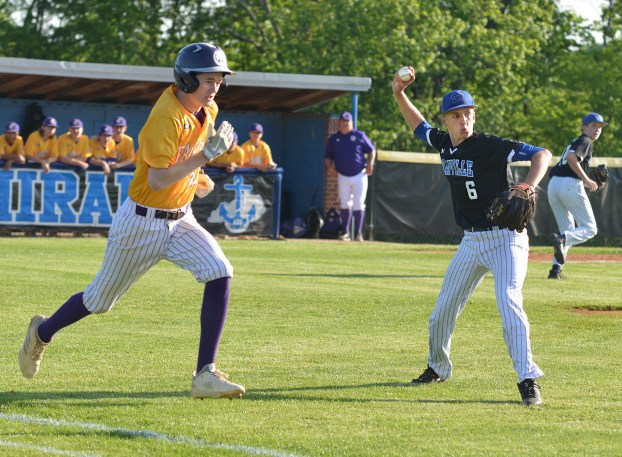 Brady Morse (6) throws out a Campbellsville runner at first. Photo by Robin Hart 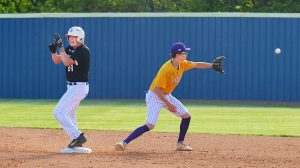 Hunter Baxter (24) reacts while standing on second base. Photo by Robin Hart

Danville scored early and often through the first few innings of a 6-1 victory over Campbellsville on Monday.

The game was played on Troy Trumbo Day, held every year in memory of the late Troy Trumbo, a Danville Admiral player who died almost 25 years ago. Kyren Burdette, Trumbo’s cousin, threw out the first pitch and the Admirals began scoring not long after, when Ethan Wood drove in one on a double in the first inning. Danville scored again in the first on a wild pitch that let a runner on third make it home.

The Admirals scored one more in the second inning and two more in the third. Their sixth run came on a home run by Cayden Shaver in the fifth inning.

Brady Morse got the win for Danville. He surrendered one run on seven hits over seven innings, striking out seven and walking one.

Ryan Kearney took the loss for Campbellsville. He allowed six hits and six runs over six innings, striking out eight and walking one.

Danville scattered six hits in the game. Four of those hits were by Shaver and Wood, who both had two hits.

Campbellsville racked up seven hits but didn’t get on the board until scoring a single run in the top of the seventh.

Brady Morse throws a pitch from the mound. Photo by Robin Hart

Brady Morse throws a pitch from the mound. Photo by Robin Hart

Ethan Wood makes a catch at first to get the runner out. Photo by Robin Hart

Kyren Burdette throws out the first pitch on Troy Trumbo Day. Kyren is the cousin of the late Troy Trumbo; standing behin Kyren are Troy’s parent’s Doris and Robert. Photo by Robin Hart
You Might Like

Danville squeaks through prelims, loses to Glasgow in national tournament

This past weekend was an unusual one for Danville High School’s quiz bowl team. But it wasn’t because they were... read more