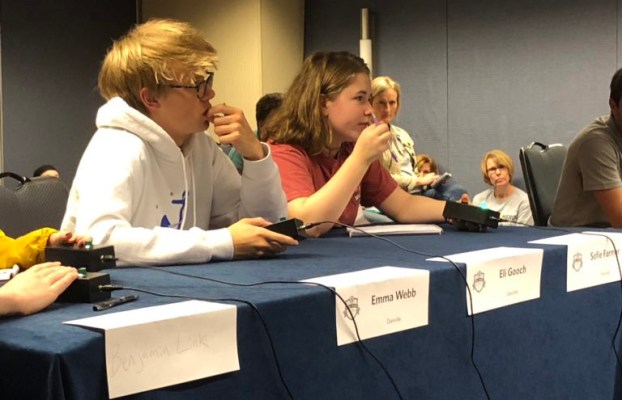 Danville quiz bowl team members Eli Gooch, left, and Sofie Farmer, participate in a match at a national tournament in Illinois this past. Photo by Kyle Hill/NAQTweekend.

Danville squeaks through prelims, loses to Glasgow in national tournament

This past weekend was an unusual one for Danville High School’s quiz bowl team. But it wasn’t because they were competing among the best quiz bowl teams in the nation in the 2019 Small School National Championship Tournament, held in Rosemont, Illinois.

“We’re normally a really consistent team as we play, but we just didn’t seem to hit our stride during Saturday’s preliminary rounds,” said Rob Kremer, the team’s coach.

“We uncharacteristically had a lot of early interrupts on questions and that gave the teams we were playing against a big advantage. We started off really strong with three quick wins, but then picked up three losses against the teams that ended up finishing fifth, sixth and seventh.”

Danville ultimately finished 11th in the tournament, out of the 80 teams that competed from 20 states.

“After round eight, we were sitting at 4-4 and knew we needed to win our last two matches to make Sunday’s playoffs,” Kremer said. “The kids came out really strong in both games, with junior Benjamin Link carrying us in match nine and everyone on the team stepping up in match 10. We knew going into the tournament that we were good enough to make the playoffs  and fortunately, we were able to put the pieces together to survive and advance.”

According to National Academic Quiz Tournaments (NAQT), the organization that runs the quiz bowl tournament, Danville was twice on the “brink of elimination” during the preliminary rounds — once against Branford from Florida and once against Williamsville from Illinois.

“Once playoff seeding was announced, we knew our first round would be against one of our losses from the prelims,” Kremer said. “We came out strong in that match, with senior captain Eli Gooch leading both teams in scoring and advancing us to the second round of the double-elimination playoffs.”

But that win set up a tough second game for Danville against the No. 1 seed, Glasgow — another Kentucky team. Kremer said Glasgow came into the match against Danville as two-time defending champions, on a 35-game winning streak. The last time Glasgow lost? “Two years ago, in the preliminaries — against us,” Kremer said.

“We played our best game of the tournament that round, jumping out to a big lead with some key buzzes by sophomore Sophie Farmer and junior Emma Webb,” he said. “They were just too much for us in the second half, and they escaped with a narrow win. Our final two rounds were another win, followed by a loss to seventh-place finisher Bridge Creek, knocking us out in 11th place.”

Glasgow went on to win the championship again. (Kentucky was well represented in the national tournament with seven teams — representing almost 9 percent of the field.)

“I was really proud of how the team recovered once we made the playoffs,” Kremer said. “We easily could have just been happy to make it in, but the kids were really focused and played their best matches of the tournament on Sunday.”

Making it to the national stage isn’t easy, and it’s even more impressive considering the small size of Danville’s team: only five or six players for most of the year. “But the kids knew what they could do if they put in the work,” Kremer said.

“There are actually three big national tournaments that Danville can qualify for each year, and this was the first year that we’ve qualified for all three since 2008 or 2009,” he said.

Danville was unable to participate in the other two tournaments due to scheduling conflicts, but just qualifying was “a huge accomplishment,” Kremer said.

“We also had a lot of support throughout the year from our school board, (Superintendent) Dr. (Tammy) McDonald, (Principal) Mrs. (Haley) Ralston, the staff at our school, our parents and the community — especially the folks at Bob Allen who offered to pay for our transportation to the tournament,” he said. “It was a really exciting year and this tournament was a great send-off for Eli (Gooch, captain), who has been one of the cornerstones of our team since his freshman year.”

STAFF REPORT sports@amnews.com ROSEMONT, Illinois — On the weekend of Saturday, May 4, Danville High School joined 151 of the... read more