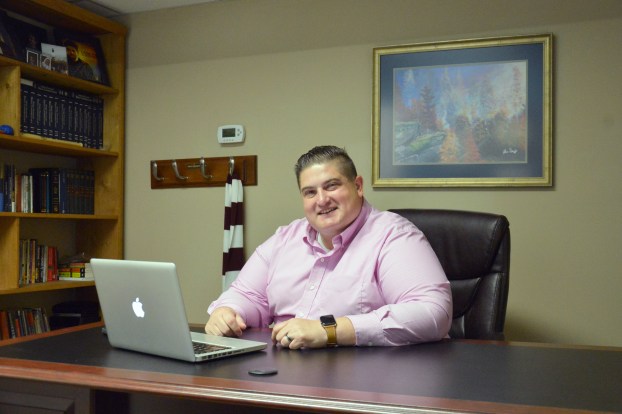 Local pastor fills many different roles in the community

Pastor, overseer, business manager, musician, dad and husband are just a few of the titles that Bryan Montgomery has associated with his name.

“I’ve got lots of titles; which one do you want?” Montgomery asked, laughing. 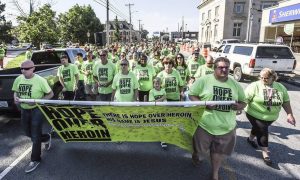 Montgomery is senior pastor at the Danville Church of God, where he’s been preaching for the past 10 years. While sitting in his office filled with photos of his family, books and artwork, “I guess my favorite title is Dad. None of that matters when I go home. My kids (Brycen, 11, and Jace, 7,) and Jill (his wife) could care less what everybody else calls me,” he said.

“I go by Bryan or Pastor Bryan. I tell people all the time, my Dad is a pastor, my grandparents were pastors. So every time somebody says ‘Brother Montgomery,’ I turn around and look for my dad.”

In addition to being senior pastor in Danville, Montgomery is also the district overseer of six other Church of God churches in Junction City, Mitchellsburg, Perryville, Harrodsburg, Burgin and Lancaster. He’s one of 12 pastors on the State Council of the Church of God in Kentucky, which includes 247 churches.

Montgomery said the Church of God is Pentecostal. “The cool thing about this church — I’m proudly Church of God, it’s my heritage — but at this church, we have become basically a melting pot, an interdenominational church. Baptists, Methodists, Catholics, Nazarenes, independents, Pentecostals, they’ve all found a home here.“

Every week and every day is a bit different Montgomery said. “There’s always hospital visits to make. I’m very involved in the community, so it’s nothing for you to find me in fiscal court on a Tuesday, or city council meetings.” 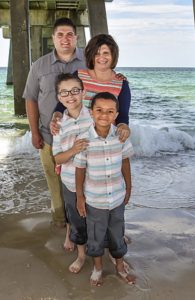 Bryan Montgomery with his wife Jill, and their sons Brycen and Jace. Photo contributed.

“I spend a lot of time out in the community. I’m not an office guy — I come in here (to his office) to write my sermons and get my things done.”

A church is sort of like a business, Montgomery said. The property needs to be maintained, payroll met, deposits made and bills paid.

He preaches during the main worship services on Sunday mornings and Wednesday evenings, and said it takes him about four to six hours to write a sermon and create a powerpoint presentation for each.

“I believe that people are visual. So I take my notes and my thoughts and my studies and I compile them into a PowerPoint. And when I preach, my media team runs my PowerPoint,” which he hopes will “drive the point home.”

Music ministry is also a way that Montgomery shares his message with the congregation. He sings, plays piano, drums, guitar and trumpet. He’s even recorded a couple of albums.

“I grew up around music,” Montgomery said.

Montgomery’s parents were raised in west Danville, and he was born at Ephraim McDowell hospital in 1978. He also spent his early childhood attending church in Parksville where his grandparents pastored for nearly 30 years, he recalled.

He carries out traditional duties of a pastor like funerals and baptisms, and really enjoys seeing the new babies. “I try to get to the hospital within a few hours after the babies are born and have my picture taken with the newborns.”

Montgomery, and many in his congregation, are “heavily involved in the drug recovery community in Boyle County. … A lot of new families attend church here because of that.”

He said the church deals with “a lot of broken people … broke, busted, disgusted … My favorite part is seeing people turn their lives around.”

Having his photo taken with church member’s newborns is a favorte thing Bryan Montgomery enjoys doing as pastor of Danville Church of God.

A free event will be held 4-6 p.m. Thursday at the Boyle County Public Library, allowing the community to get... read more