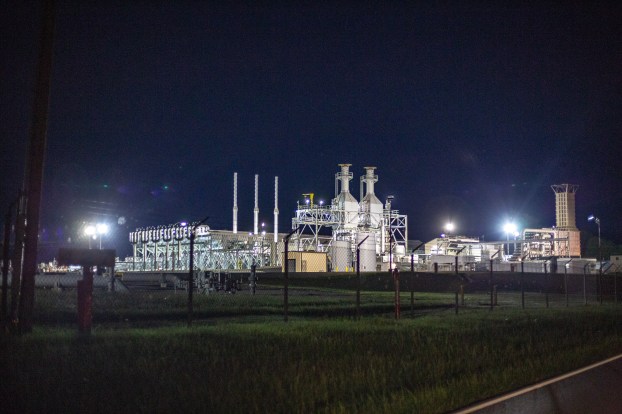 The Texas Eastern facility on Airport Road is seen from the roadway Wednesday night, shortly after a gas leak was brought under control and the road was reopened. (Photo by Ben Kleppinger) 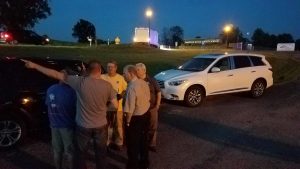 Emergency management authorities discuss the situation near the site of a gas leak Wednesday evening. (Photo by Ben Kleppinger)

A natural gas leak at the Texas Eastern compressor station on Airport Road shut the road down for a little less than an hour Wednesday night.

The leaking gas made things quite noisy in the area.

“It sounded like jet engines when we got here,” Gilliam said. “From the very get-go, they (Texas Eastern) said there was no danger, we didn’t need to evacuate or anything like that. … Everything took place right on the facility.” 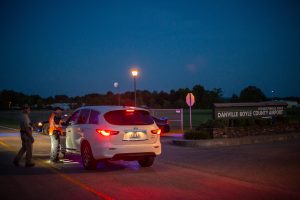 First responders redirect traffic outside the Danville-Boyle County Airport while Airport Road was shut down Wednesday night for a gas leak. (Photo by Ben Kleppinger)

Airport Road was shut down as a precaution, in order to prevent vehicles from sparking an ignition of the gas, said Boyle County Emergency Manager Director Mike Wilder.

Residents in a mobile home park in the area were told to shelter in place during the incident, Wilder said.

Wilder was dispatched to the scene just after 8:30 p.m. Wednesday; the road was reopened before 9:30 p.m.

Gilliam said Texas Eastern was bringing in technicians Wednesday night to figure out what had caused the valves to leak.

Boyle County High School received an honor Wednesday morning, and it was hand-delivered by the secretary of state. Alison Lundergan... read more