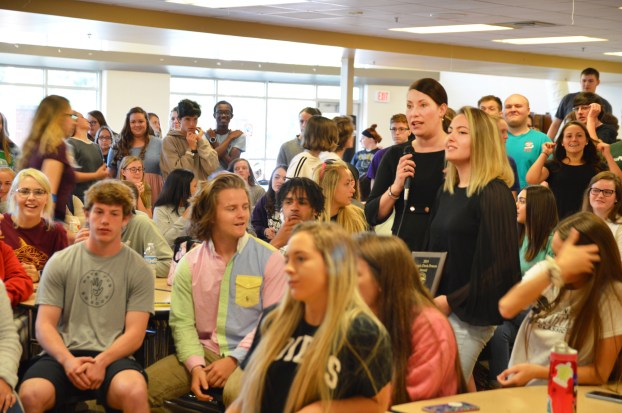 Boyle County High School received an honor Wednesday morning, and it was hand-delivered by the secretary of state. Alison Lundergan Grimes presented the Georgia Davis Powers Award to the only 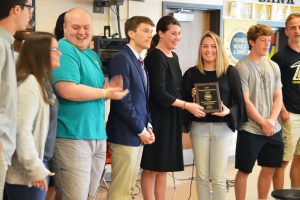 Grimes stands with Fitzwater, second from right, after presenting her with the school’s award. She said Fitzwater led the charge of encouraging her fellow, eligible students to register to vote. Photo by Bobbie Curd.

high school in the state with 100% of eligible students registered to vote.

“I’m here today to present to Boyle County an achievement that only Boyle County is receiving this year, in all of our high schools across the Commonwealth, this is the only high school in the entire state of Kentucky that managed to get all of your eligible students registered to vote,” Grimes said.

Grimes hammered home the importance of voting rights to the cafeteria full of seniors, and then handed the Powers Award plaque over to Vanita Fitzwater, explaining how she led the charge at BCHS to get students registered.

“Here in Boyle County, you’re no stranger to making this school and this community a better place,” Grimes told the crowd, calling the community very active and engaged. She explained that the late Sen. Georgia Davis was a pioneer of Frankfort, as the first African-American and woman elected to the Kentucky State Senate.

Grimes said she wanted to honor the late senator by naming the award after her in ‘16, because Davis worked to make sure schools had the funding they needed and deserved, was a trailblazer for Civil Rights and made sure everyone — regardless of their race — had access to a ballot box, among many other things.

“Right now, there are pundits that bet against each and every one of you all, do you know that? Grimes asked the students. “They say you’re the lost generation, that in the era of texting and tweeting and chatting and Facebook liking and instagram, Snapchatting … that in this era of social media extravaganza, that you all are the lost generation and won’t show up.”

Grimes said Sen. Davis “taught me to never give up on youth, and they are our future. I’d not be here if she’d given up on me. She was my mentor, she taught me.”

Grimes applauded Fitzwater’s work in spreading the word about the importance of getting registered to vote.

“I need folks realizing the power of their voice to make a difference,” Grimes said. 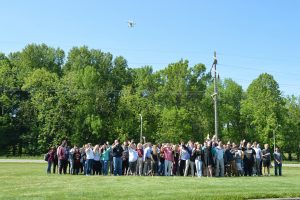 Boyle County High School students stand with Secretary of State Alison Lundergan Grimes while waving to a drone above, for an aerial picture. Photo by Bobbie Curd.

Fitzwater said most of her work with getting students registered was one-on-one. “I just talked to a lot of people and informed them, we’re electing local people, and they’re representing us on such a large scale. It’s really hard for us to get our voice into government, even with the system that we have.”

Fitzwater said when communities rally together, “We can go to Frankfort, Capital Hill and speak our opinions whether in protest or in court …” but that she feels local elections are some of the most important to be active in.

Tyler Murphy, who teaches AP Government, told Fitzwater, “You did a good job. I appreciate you reaching out to inspire. You inspired others.You started the ball rolling.”

Fitzwater smiled. “I’m glad we were able to do it.”

“You’re aware there’s an election on the 21st? 12 days and a wake up!” Grimes said, and repeated a few times. As secretary of state, her office “works really hard to make sure you’re participating in this thing we call democracy.”

Grimes said in her role as chief civil advocate, she is out “making sure people realize you have two hands in life for a reason — one to help yourself, the other to reach back out and help bring somebody else along with you.” 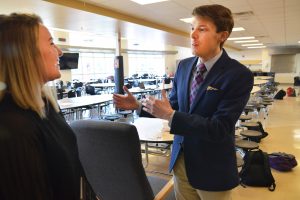 Vanita Fitzwater and AP Government teacher Tyler Murphy talk about how Boyle County High School is at 100% of eligible students registered to vote. Fitzwater led the charge, engaging many students about their right to vote, and why they should be aware of local elections. Photo by Bobbie Curd.

Grimes told the students she is betting on them. “I hope I’m looking out at a future secretary of state, attorney general, supreme court justices … You’re the leaders, and not the future, current leaders. How many good things have happened in Frankfort because you showed up and got out and got loud. You stopped bad legislation …”

The secretary of state said the school is taking a huge step in making sure everyone is registered to vote who is eligible. “You have the potential to make sure you’re no longer the minority participating in our elections, but the majority.”

Juvenile struck by car in Danville

STAFF REPORT advocate@amnews.com A juvenile on a bike was hit by a vehicle Tuesday evening while traveling across West Main... read more