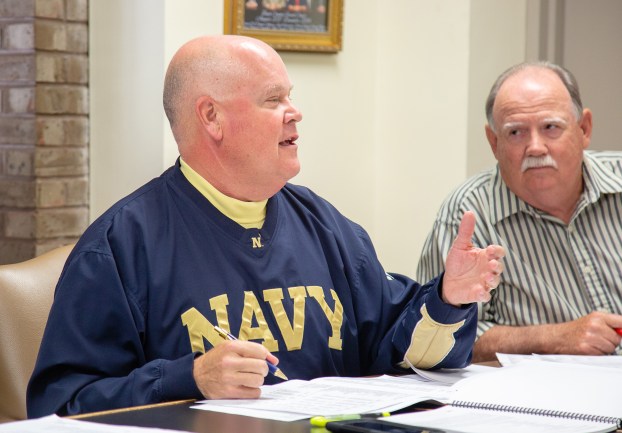 Boyle will spend at least $70K on economic development next year

Boyle County Fiscal Court voted Wednesday to invest $70,000 in the local Economic Development Partnership next fiscal year — the same level of investment it made this fiscal year. It also set aside $30,000 that could be given to the EDP later if magistrates OK it.

The fiscal court saved the contentious discussion of how much it wanted to spend on local economic development efforts to the end of its budget workshop Wednesday.

Magistrate Jamey Gay was the strongest supporter of investing in job growth by funding the EDP.

“We all know and recognize … that job growth is our No. 1 priority and that is one of our major drivers in our budget,” Gay said. “We have, I think, one of the most cost-effective approaches to economic development in our joint partnership.” 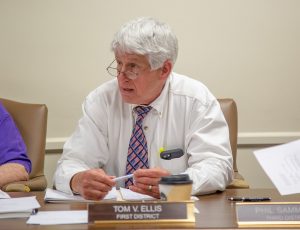 Magistrate Tom Ellis proposed Wednesday cutting funding for the Economic Development Partnership by $20,000, but no one else supported his proposal. Photo by Ben Kleppinger.

The EDP asked Boyle County and Danville to both increase their investments to $150,000 in the next fiscal year, in order to fund new and expanded economic development projects, such as:

• $42,000 for workforce development efforts, including an area wage-benefit survey and a regional job fair; and

On Wednesday, Gay proposed Boyle County match what the City of Danville is planning and increase its contribution to the EDP to $100,000.

Magistrate Tom Ellis was against that proposal. He said Boyle County has lost a net of 70 jobs over the last 10 years, “so job development has not been achieved.” That claim was challenged as “misleading” by Gay later, who pointed out it doesn’t take into consideration how many fewer jobs there might be if the EDP hadn’t been doing its work.

“You have to recognize that jobs are going to leave that you just really can’t control,” Gay said.

Ellis also brought up the Industrial Foundation’s decision last fall not to offer some of its land for a multi-million-dollar project from international distiller Diageo. The project ultimately landed in neighboring Marion County.

Ellis said he blames the EDP for the Industrial Foundation’s decision and the loss of the Diageo project. He claimed Boyle County could have realized between $400,000 and $500,000 in tax revenue a year if Diageo had located here.

Magistrate Phil Sammons proposed keeping the investment flat at $70,000, and Gay pushed back.

“The way that we keep our tax rates down is by growing our job base,” he said. “We’ve got to fund the people that are doing that work. If we’re not funding them, if we’re not putting our money where our mouth is, then all this other stuff doesn’t work.”

Magistrate Jason Cullen said he has been “outspoken about my issues with our economic development,” but he does recognize the EDP has been “up against hard times.” 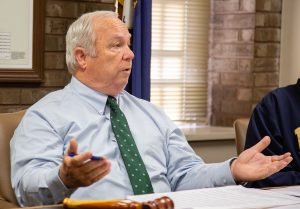 Cullen noted there are indications there could be big things happening in the next six months. “Maybe we’ll be eating crow — I don’t know.”

Ellis claimed there “was never a need for the level of secrecy” involved in EDP work. “… The secrecy that has been at the core, at the nucleus of EDP cannot go on without our judge, without our mayors and others being involved in those negotiations.”

“That’s just an unfair characterization of their meetings and I completely disagree with that,” Gay responded.

The EDP operates as a special-purpose governmental entity and abides by the Open Meetings and Open Records acts. The EDP Board of Directors meets monthly on the third Wednesday at 8 a.m. and meetings are open to the public. In addition, the EDP has several committees that hold public meetings monthly, bi-monthly or quarterly.

When businesses express interest in Boyle County for a new project or expansion, they sometimes require EDP President Jody Lassiter to sign non-disclosure agreements, which prohibit Lassiter from sharing details publicly as he works with the business. In some cases, those NDAs prohibit Lassiter from sharing details even with the EDP board in closed session; other NDAs are extended to the board members.

The NDA for the Diageo project, which Lassiter provided copies of publicly in April, was made between the EDP and Boyle County Industrial Foundation as the “interested parties” and a company.

“The Interested Party agrees not to disclose the confidential information or the content except to its directors, officers, employees, advisors, solicitors and lenders … who ‘need to know’ such information for the sole purpose of evaluating … the economic development (project),” the NDA reads.

The EDP board consists of 17 voting members — three appointed by Boyle County, three by Danville, three by the Industrial Foundation, three by Chairman’s Circle private investors, one by Junction City, one by Perryville and three at-large members appointed by the rest of the board.

As discussions continued Wednesday, Gay stressed the fact the fiscal court is a member of the EDP.

“This isn’t some other foreign, over-there entity. We are a partner. We are in effect funding ourself and our efforts for job growth in this community,” he said. “I think it’s important that we do provide the appropriate amount of funding to get that work done.” 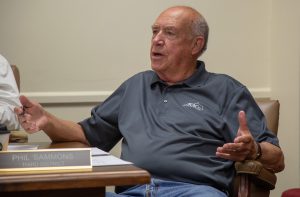 Eventually, Gay suggested investing a lower amount now and keeping some money in reserve to give to the EDP later in the year if the fiscal court chooses to. He proposed providing $80,000 and holding $20,000 in reserve. Judge-Executive Howard Hunt modified Gay’s proposal, suggesting the court provide $70,000 and hold an additional $30,000 in reserve. That proposal was supported unanimously.

The EDP was one of 24 external appropriations for budget year 2019-20 considered by the fiscal court during its budget workshop. Many of the community and other governmental agencies that requested funding were given the same amount they received this year, but there were some changes:

• Helping Hands, a nonprofit focused on helping needy families in Boyle and Mercer counties, had its allocation cut from $9,000 to $5,000;

• Main Street Perryville was given a funding increase from $39,215 to $44,215 in order to provide Director Vicki Goode with a raise;

• the annual Veterans Day appreciation lunch event was given an increase from $600 to $1,000 to help cover costs because Danville eliminated funding; and 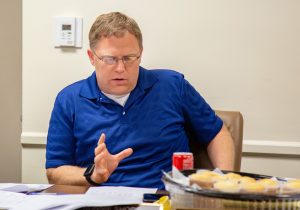 Magistrates did not make a decision about whether to continue funding the Nursing Home Ombudsman office at $2,600. And they declined to provide any money to three agencies asking for new funding — Community Action Partnership, Pioneer Playhouse and Heart of Danville. The Great American Brass Band Festival was given $10,000 despite submitting its application well past the deadline. Turnover in the festival’s director position led to a misunderstanding about the deadline; magistrates said they would overlook the delay and continue funding the festival.

Farmer chosen as next Hogsett principal